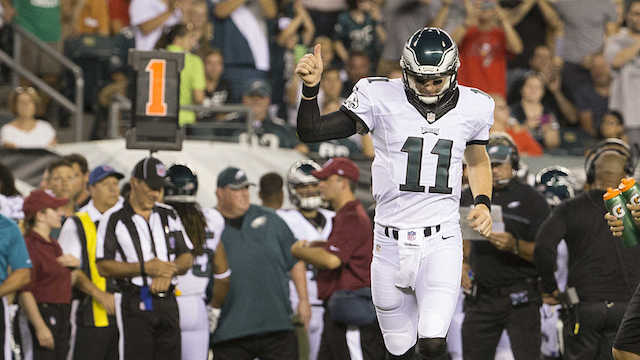 Despite a 4-6 performance by top 10 consensus picks in Week 8 in the Las Vegas Westgate SuperContest, the players enjoyed a nice bounce back, netting 2.5 points apiece after a disastrous Week 7 in which each of the top 11 teams failed to cover. That’s a hearty improvement over the 1.7 points per squad in last week’s epic disaster.

Here is the against-the-spread record (and other records) for NFL Week 7 and year-to-date, courtesy OddsShark. Then we’ll get to the SuperContest selections and look closer at how it unfolded:

Here’s a snapshot at the most popular Week 8 picks among the field of 2,748 in the $1,500 per-entry contest that will pay over $1 million to the winner (courtesy FantasySuperContest):

It’s unanimous: Poolsters are off the Tampa Bay Bucs’ pirate ship. The Panthers dominated their NFC South battle 17-3 and realistically should have won by more. The Falcons just barely covered that 4.5 with a 25-20 victory and snapped their three-game losing streak (straight up and ATS), while the Cowboys have shaken off their rough start to improve to 4-3. (The Redskins also authored a betting eruption with another defensive score allowed in the game’s final minute.) Ezekiel Elliot’s suspension is now back on, which will create a bit of handicapping uncertainty for Dallas and its opponents moving forward in the latest protracted legal battle in the NFL.

Two more road favorites delivered for the pool after the pair shown above: the Vikings in London over the Browns 33-16 (betting against the Browns remains a profitable venture), and the Steelers -3 at Detroit (in which Detroit sure looked like the “right” side) with a narrow 20-15 victory.

On the season, here’s your top performers against the spread: Buffalo Bills (5-1-1), Kansas City Chiefs (6-2), Philadelphia Eagles (6-2) and the Houston Texans (5-2). Each of them picked up another cover in Week 8.

On the cusp of the NFL’s halfway mark, which occurs at some unidentified point during Week 9, we see some familiar names hanging atop the SuperContest leaderboard: PHD SPORTS has retaken the lead after a 3-2 performance, improving to 28-12 (70%). A new name shot up the board with a 5-0 showing to become the co-leader at 28-12. That’s GRAND DRAGON. Early leader BIOSOFT GLOBAL (and presumed owner of BIOSOFT SPORTS) has surged back up to 27-12-1. TUNNEL VISION is also hanging around despite another down week (2-3), just one game off the leader.