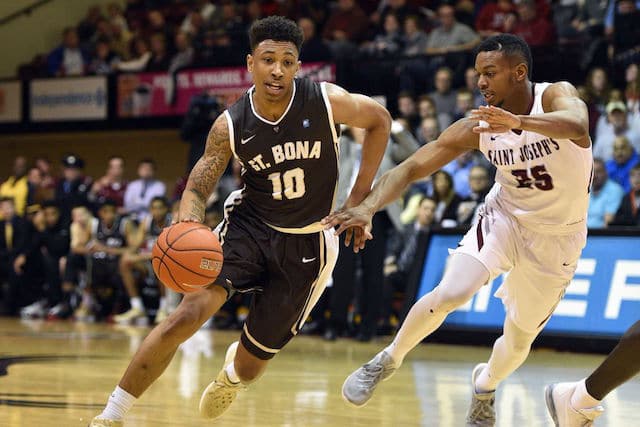 You may not have noticed last summer, but the NCAA Tournament selection committee made a change in how it chooses at-large teams for the Big Dance – one that in theory is supposed to help mid-majors as opposed to the seventh-place team in the ACC or Big Ten.

The committee altered its selection guidelines to balance neutral-site and road-game outcomes on its team sheets. Those “team sheets” now place greater emphasis on where the games are played rather than the RPI ranking of each opponent. As an example, a home win against a team ranked in the Top 30 of the RPI would have as much weight as a road win against a Top 75 team. Winning away from home is much more important, and this theoretically would benefit mid-majors because they always have to play at the power schools for financial reasons.

Let’s look at NC State of the ACC and St. Bonaventure of the Atlantic 10.  The Wolfpack currently are listed among the “Last Four In” the NCAA Tournament by ESPN’s Joe Lunardi, while the Bonnies are among the “First Four Out.”

The ACC has the No. 3 RPI among all conferences and the A-10 is way down at 10th, below other mid-major conferences such as the American Athletic (that’s a pseudo mid-major league), Missouri Valley and Mountain West.

As of this writing, NC State (17-9) has an RPI of 70. The Wolfpack have an excellent five wins over Top 50 teams: Arizona, Duke, Clemson, North Carolina and Syracuse. The wins over the Wildcats, Tar Heels and Orange were either at neutral sites or true road games, which boost NC State’s case. The Pack’s worst loss by far is to Northern Iowa in a Thanksgiving tournament in the Bahamas. They also have a bad loss to UNC Greensboro.

This past Wednesday’s win over Syracuse could go a long way for NC State because the Orange also are on the bubble – currently among Lunardi’s “First Four Out” but with a superior RPI of 50. An NCAA berth would validate an amazing job done by first-year NSCU coach Kevin Keatts, who led UNC-Wilmington to the Big Dance the past two seasons. Despite having a 2017 NBA lottery pick on last year’s team in freshman Dennis Smith Jr., the Wolfpack finished 15-17 and Coach Mike Gottfried was fired.

NC State doesn’t play any teams currently ranked the rest of the regular season and three of the five are at home so it could be looking at 20 wins and a .500 record in the ACC, which should be good enough for a bid.

The Atlantic 10 got three teams into the 2017 NCAA Tournament in champion Rhode Island along with VCU and Dayton. The Rams are a powerhouse this year and running away with the regular-season title but the Rams and Flyers are down so it’s possible the A-10 gets just one team in the tournament if Rhode Island wins the conference tournament as expected.

St. Bonaventure (19-6), which hasn’t reached the Big Dance since 2012, has an RPI of 41 behind a spectacular backcourt of Jaylen Adams and Matt Mobley, who combine for nearly 40 points per game. The Bonnies have played a much easier schedule (116th nationally at KenPom.com) than the Wolfpack (50th) because, again, power schools won’t schedule such a dangerous foe and the A-10 drags down St. Bonaventure’s strength of schedule. Its best wins are at Buffalo, the likely Mid-American Conference champ, neutral site vs. Vermont, the likely America East champion, and at Syracuse. So, in theory, the Bonnies should get in ahead of the Orange if all the other factors are nearly even.

What hurts St. Bonaventure is bad losses to Niagara out of conference and to Dayton, Davidson and Saint Joseph’s in A-10 play. The Bonnies could boost their case immensely by ending visiting Rhode Island’s 16-game winning streak on Friday night. Rhody is the only schedule boost St. Bonaventure, which has won four straight vs. ranked foes, will get the rest of the way … unless the Bonnies play the Rams again in the A-10 Tournament.

Take Bonnies +2.5 (current William Hill line) as Rams star guard E.C. Matthews is in question with a knee injury and this game means much more to St. Bonaventure.