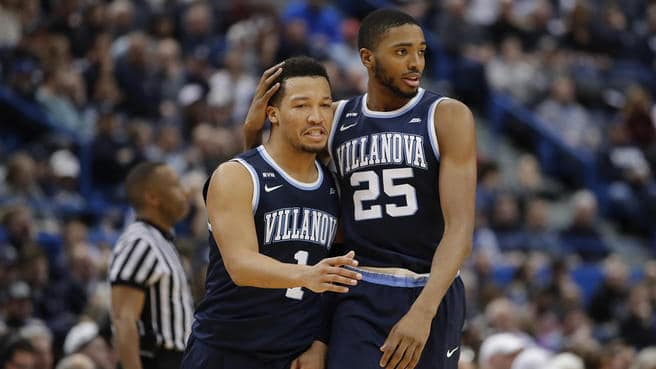 In my March Madness region previews, I have projected No. 4 Arizona to come out of the South Region, which looks to be the toughest, and No. 4 Gonzaga to come out of the West, which looks to be the easiest. That completes the “left” side of the Final Four. Not loving I’ve picked two No. 4s in the national semifinals as that has happened just a few times, last in 2013, but no going back now.

What the overriding story line of the South Region? I believe that No. 1 Villanova has the easiest road of any top-seeded team and that the South is the second-easiest bracket overall behind the West. The Wildcats had their four-year run of Big East regular-season titles end this season but rallied to take the conference tournament. They are +500 favorites to win a second national championship in three seasons and +125 in the East.

What’s not to like about the Wildcats? Jay Wright has made this program into every bit the blue-blood that a Duke, North Carolina, Kansas or Kentucky is. Villanova became just the second team in Division I history to win at least 30 games in four straight seasons and if it reaches the Final Four will set a D-I record for wins in a four-year span (Gonzaga can too). Villanova has won 130 games in the past four seasons, and the record is 133 by Duke (1997-98 through 2000-01).

Nova has the nation’s top offense behind two future NBA players in Big East Player of the Year Jalen Brunson (19.4 ppg) and Mikal Bridges (18.0 ppg, 5.4 rpg), who actually will be the higher draft pick. KenPom has the Wildcats No. 1 in offensive efficiency at 127.4 points per 100 possessions. To win a title, recent history has shown schools need to be Top 20 in both offense and defense; Nova is 22nd defensively, surrendering 96.0 points per 100 possessions. The team can get a bit 3-point happy as well, and in all four losses the Wildcats shot very poorly from deep. But, you can say that about nearly every contender.

While the South Region is loaded with defensive powers, the East is an offensive bracket as the No. 2 seed is Purdue, which is also No. 2 nationally in offensive efficiency. The Boilers are +275 to win the East. They are by far the worst No. 2 seed in this writer’s opinion – Purdue didn’t win either the Big Ten regular-season or conference titles. Carsen Edwards is an excellent player and the Boilers have two 7-footers in Issac Haas and Matt Haarms, but Coach Matt Painter’s rotation goes only about seven deep. So an injury/foul trouble (Haas tends to get into that and is very slow, thus playing less than 24 minutes per game) and the Boilers are toast. Also keep in mind that Purdue lost its past three games vs. ranked teams.

There’s a huge drop-off to win the East after those two at No. 5 West Virginia (+800), No. 3 Texas Tech (+1000) and No. 4 Wichita State (+1000). Do any of those schools scare you? WVU has that hard-to-handle pressure defense but it’s generally vastly less effective outside or Morgantown. If you have time to prepare for “Press Virginia,” you can deal with it. It’s most effective in a quick turnaround game. The Mountaineers also lost five of six at one point.

Texas Tech’s best player, Keenan Evans, still isn’t 100 percent from a toe injury and the Red Raiders lost five of their final seven. Wichita State has all five starters back from last year but could win either the regular-season or tournament titles in their new conference, the AAC.

Villanova is my biggest Final Four lock. Not only is it clearly the best team in the East, it will play the first two rounds in nearby Pittsburgh and the next two in nearby Boston.