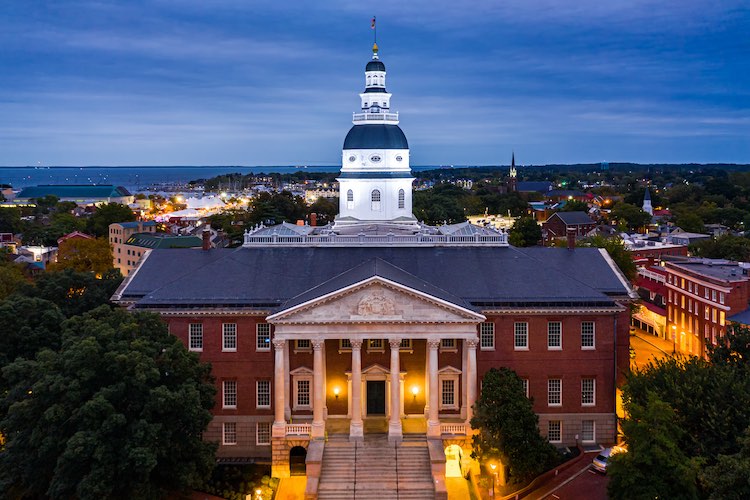 The Maryland House of Delegates on Thursday afternoon took a small but necessary and important step toward implementing the framework for legal sports betting in the state — an expansion that voters overwhelmingly approved via ballot referendum in the November  2020 election. The House Ways and Means Committee heard from proponents and some critics of the betting bill, with testimony from roughly 25 interested parties including representatives for the Maryland State Fair, lobbyists for national sportsbook operators, problem gambling advocates, and others.

The bill under discussion is HB 940, sponsored by House Speaker Adrienne Jones. It did not go to vote Thursday, but it appears poised to advance to the floor this session, which ends April 12. In 2020 both chambers actively discussed how to shape a legal sports betting framework in the state, but due to the havoc wreaked by the unfurling COVID-19 pandemic, leaders decided it was wisest to simply put the ballot question up for voters first and figure out the details later, which is now occurring.

During the roughly three-hour hearing, three key discussion points repeatedly emerged: interest in increasing the number of licenses for digital brands available from 10 to 20 (or more); ensuring that minority businesses and business people have legitimate opportunities to participate in the market in both procurement and as actual equity owners with licensees; and making sure that Maryland keeps up with its neighbors such as Virginia, by implementing a competitive framework that will generate as much revenue as market forces will allow to benefit all Maryland students’ education.

“A disparity study review found that minorities are historically shut out of as meaningful participants in the gaming industry in Maryland,” said Jones, discussing the importance of provisions in the bill to put minorities on equal footing.

The committee did not take a vote but received a range of testimony and calls for certain amendments to address the concerns laid out above. There is not yet a companion bill in the Senate, but it is expected to materialize after a work group comes to a consensus on how best to proceed. Fantasy sports contests are also considered in the bill with new taxes levied on those operators.

Here’s a look at the details

Some of the issues brought up last session included how to handle mobile vs brick-and-mortar operation, where funds go, if teams should have licenses, minority involvement in the business and more.

After Jones gave an overview, Delegate Eric Ebersole reviewed key points in the framework of the bill. It would:

On balance, Maryland appears to be on track for a reasonably competitive market. However, amendments are coming primarily aimed at increasing the number of licenses to 20, so there are not only a pair of licenses available beyond the eight to 10 that would likely go to the physical locations. The general sentiment expressed by various stakeholders: Why not open up the competition and make more licenses available to minority and local groups?

“During this process we will hear from many special interests — regional and otherwise,” said Delegate Eric Luedtke, a supporter of the measure. “Our job is to find the public interest, making sure our commercial gaming industry is competitive with other states. And this bill will do that. It will provide access as the voters approved wagering in person and online, and get the revenue we need to fund programs we care about. It will raise revenue for our schools.”

“We must create opportunities for minority business owners to own equity in these licenses in a way this state has rarely provided in the gaming industry, he said. “Horse racing, OTBs, bingo halls, are almost entirely white-owned. There are provisions crafted here to abide by legal standards, but set Maryland out as the national leader in providing opportunities for minority ownership and equity in the gaming industry to create truly equitable economy.”

But questions persisted as to how to actually accomplish this goal. Delegate Jason Buckel inquired what criteria would be used, whether to set aside a targeted percentage of licenses, use a weighted criterion, or actually implement a mandate.

Thomas Kelso, Chairman of the Maryland Stadium Authority, says that teams in Maryland should be able to have sports gaming licenses.

He notes that fans may be more inclined to stay home and gamble on events, lowering ticket sales or money for other local businesses.

The committee heard testimony from over 25 witnesses, several of them representing the Maryland State Fair, who insisted that the nonprofit group should have a seat at the table, holding that it would indeed boost revenue generation as the current home of the highest-performing OTB in the state.

Christian Goode, CEO of IG Acquisition Group and founder of Ivory Gaming Group, testified about the importance of increasing the number of mobile licenses available.

“Several states allow more than 10, and we would support as many operators as possible to develop the most robust market,” he said. “Virginia received 25 applications for just 12 licenses.  Maryland will receive more than that. It’s a means to provide a seat at the table for diverse entities to participate, not just the established casinos. It will lead to a robust sports wagering industry within the state of Maryland.”

She also advocated for a reporting requirement in the bill. Around the country, enabling legislation requires regulators to report vastly different information about total bets made and revenue generated, including within which sports and so forth. Some states require only a bare minimum. In other words, Weinstock encourages total transparency.

No other hearing is currently set for the bill, but it is expected to gain a favorable report and move forward. In the event that some version of this bill’s framework reaches Gov. Larry Hogan’s desk this session, it is possible that sportsbooks would go live sometime in the first quarter of 2022, perhaps a bit sooner.