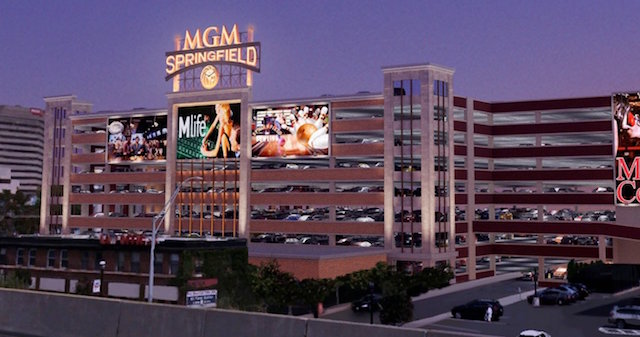 A rendering of the MGM Springfield property

The bill would trigger the formation of an eight-person committee within 30 days — in the event that the Supreme Court of the United States rules the Professional and Amateur Sports Protection Act (PASPA) unconstitutional in Christie v NCAA. PASPA is the 1992  federal law banning sports betting outside Nevada.

“There are a lot of states teeing this up and if there is a competitive consideration we ought to at least give the Legislature enough of a heads-up with enough time that if they wanted to prepare,” Gaming Commission Chairman Stephen Crosby said last month, “or at least have some committee that knew what was going on, they have time to do that.”

Massachusetts Senator Sees a Potential ‘Sea Change’ With Respect to Sports Betting, Proposes Bill to Allow State to Prepare for Implementation of Rules and Regulations on Sports Wagering

The Massachusetts legislature is currently in session, although it does not appear that Senator Donoghue has yet submitted SD-2480 to the joint committee on Economic Development and Emerging Technologies. There is not yet a scheduled hearings yet on the DFS component of the bill or on sports betting.

“The general feeling is that if suddenly sports betting, which is an enormous illegal industry right now, were to be given a green light that things could happen very rapidly,” Donoghue said, per the Worcester Business Journal, adding that the envisions “a whole sea change as it relates to sports betting.”

If the high court strikes PASPA the game would indeed change, numerous northeastern states, including Massachusetts neighbors Rhode Island, Connecticut and New York, are looking to implement sports betting in there borders, some with greater speed than others.

In those states at least for the time being it appears the licenses would go to the existing land-based casinos, with any online sports betting component flowing through those establishments. In this very early stage in Massachusetts they appear to be considering online sports betting off the bat, perhaps in part because DraftKings is headquartered there (and just went on a hiring spree).

The Language of the Bill

Here’s the part that discusses sports betting in Section 10:

That committee would be formed based on appointments by various state officials. Their task?

They shall submit recommendations for legislation with the clerks of the senate and the house of representatives not later 120 calendar days following the decision by the United States Supreme Court.

Massachusetts currently has some horsetacks, a  slot parlor opened at Plainridge Park Casino in June 2015, and two casino resorts in development: MGM Springfield set to open in October 2018 and Wynn Boston Harbor in 2018.

The decision in Christie v NCAA is expected to come down in April in May. If this measure gets approved according to the existing dates, Massachusetts could have a regulatory framework in place by the end of 2018 — in time for Super Bowl LIII.