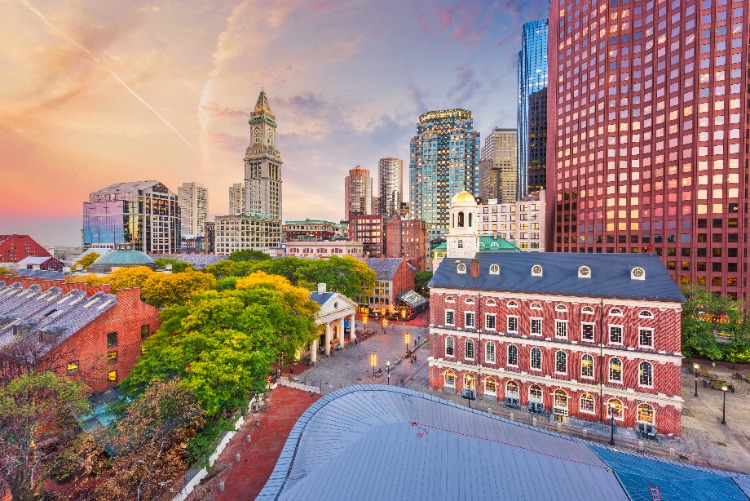 It’s been no secret that those in the most populous eastern part of the state have been crossing the border into New Hampshire for more than two years to place bets. In fact, according to DraftKings, which has a monopoly on digital wagering in New Hampshire, 28% of its Super Bowl weekend bets came from customers with Massachusetts addresses. While politicians are being vocal about their impatience, imagine what the conversation about this must be in Boston, where DraftKings is headquartered.

On Sunday, Baker used the Super Bowl as a backdrop to share his feelings in a tweet:

We filed a bill in 2019 and again last year to make sports gaming legal. MA is losing out to neighboring states on this, especially during big games.

“The speaker and I both tweeted the unfortunate circumstance that a significant number of people from Massachusetts chose to travel over the border and vote with their wallets on what they thought was going to happen in the Super Bowl,” Baker said during a Monday afternoon press briefing. “The lieutenant governor and I have filed a bill on this two or three times. There’s legislation that’s passed the House — it’s been part of the ongoing discussion between us, the House, and the Senate now for over a year. I really do hope this is one of the things we get done by the end of the session, along with a whole bunch of other things.”

Baker won’t seek reelection, but earlier this year, he did say he’d sign a legal sports betting bill should one come across his desk before he leaves.

Sen. Eric Lesser, who is running for lieutenant governor, is chairman of the Joint Committee on Economic Development and Emerging Technologies and the Joint Ways and Means Committee. The Economic Development and Emerging Technologies Committee has held multiple hearings with no resolution on sports betting over the last three years. And his sports betting bill, SB 269, has been sitting in the Ways and Means Committee since July 2021.

In January, when Lesser announced his statewide candidacy, he said “it’s time to do something” about sports betting. He promised to talk about it on the campaign trail, according to MassLive, but he offered no hard evidence that the General Court is making any progress on the issue.

More wagers are placed on the Super Bowl than any other single game in sports. Meanwhile, Massachusetts residents must still cross state lines in order to legally place a bet. (1/3)

Massachusetts is a perplexing situation. There are no clear roadblocks or groups that oppose wagering. There are no tribes in the state asking for sports betting, meaning the delicate dance that happened in Connecticut and is currently happening in Maine isn’t an issue.

The state’s gaming commission at one point commissioned a study, DraftKings did some early lobbying, and casinos have come together to voice support for legal wagering and stand-alone digital platforms. When the gaming commission’s white paper was released, it projected the state could take in as much as $61.3 million annually in tax revenue with statewide digital wagering.

Lawmakers seem stumped as to how to come to a consensus on how to handle wagering on college sports, but there are other issues on which the House and Senate have differed, including tax rates and mandated use of official league data.

“One issue they [were] concerned with a few months ago was the college athletes. How do we handle that? Do we allow betting on the games? What do you do with the star college athletes?” Sen. Michael Moore told Spectrum 1 Tuesday. “They use [an athlete] to draw people to the games or fundraising, those types of things. So we have to look at how the college athlete is going to be handled.”

States across the country have handled the issue of wagering on college sports differently — some allow wagering on all college sports while others prohibit betting on local college teams and events. Tax rates vary widely, meanwhile, from 6.75% to 51% depending on how sports betting is designed in a state, and the use of official league data is required in a handful of states. While lawmakers in many jurisdictions have debated such issues, the majority of states have found a way to proceed to legalize.

Massachusetts lawmakers who could control whether sports betting moves forward have, over time, failed to return phone calls from Sports Handle on this issue, and stakeholders say they are perplexed about the inability to reach a deal.

In the nearly four years since the Supreme Court overturned the Professional and Amateur Sports Protection Action, more than 30 U.S. states and jurisdictions have legalized sports betting. Lawmakers in Maryland and Ohio struggled with the process in an effort to include small businesses but eventually succeeded, then-New York Gov. Andrew Cuoumo wrested control of the process from the legislature to get it done, and voters in states from Colorado to South Dakota voted to legalize.

There are currently no sports betting hearings scheduled in Massachusetts, and no new legislation has been filed this year.

When will it happen in Massachusetts? That remains an open question.