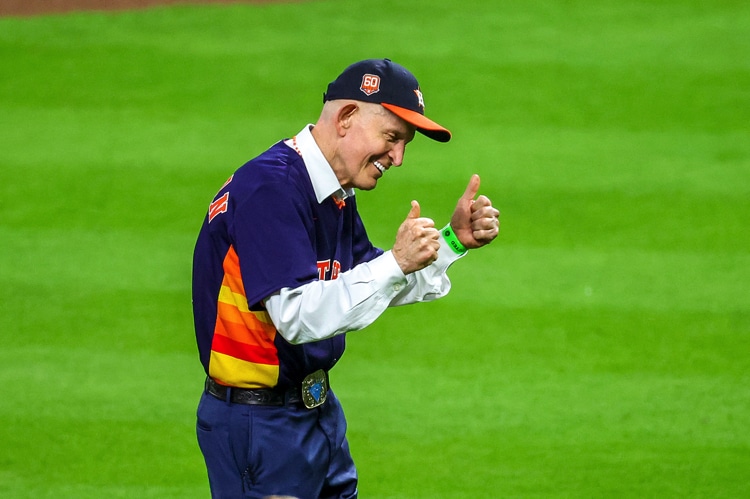 People who bought bed sets at Gallery Furniture in Houston recently might have slept a little better Saturday night, and it had nothing to do with gaining an extra hour.

Jim “Mattress Mack” McIngvale was able to cash in several sports wagering futures on the Houston Astros after they won the World Series on Saturday night, turning his $10 million risked into a win of nearly $75 million. It is believed to be the largest payout in the history of legal wagering. The Astros’ win also triggered a promotional bonanza of free furniture for customers who made purchases at the stores run by the Houston furniture magnate.

All of McIngvale’s wagers made in May and July came up winners Saturday night when the Astros won 4-1 to clinch the Fall Classic in six games for their second title in six seasons. He made bets in Louisiana, Iowa, and Nevada that were spread among six sportsbooks: Caesars Sportsbook, WynnBET, BetMGM, Barstool Sportsbook, Betfred, and Unibet.

The huge wagers are nothing new for McIngvale, who makes them as hedges for his giveaways at Gallery Furniture. With the potential of an enormous windfall from this year’s World Series bets, McIngvale doubled the normal value of his refund for furniture purchases from up to $3,000 to $6,000. Speaking ahead of the World Series, Mattress Mack said his stores did roughly $16 million in business shortly after doubling the offer.

Caesars was on the hook for the biggest payout. The $30 million from McIngvale’s three $1 million wagers at +1000 odds made in May through its mobile app in Louisiana is a record payout for the gaming titan.

What's next for @MattressMack after his historic win?

“What can we say? We just wrote the biggest check in sports betting history to Mattress Mack for $30,000,000. Would we do it all again? You bet,” said Caesars Digital COO Ken Fuchs in a statement. “While Mack may have won this round on the field, we’re proud of how we teamed up to support first responders and military veterans in Houston, Philly, and Atlantic City.

“And to Mack — we tip our Astros cap — and remind him that he can now support his Texans and Rockets … both attractively priced at +100000 to win a championship. The Astros are also currently +550 to win next year’s Fall Classic.”

It was the second big win for McIngvale this year after he picked up nearly $6.3 million for a winning $3.2 million bet on Kansas to win the NCAA Tournament in March. Prior to that, the 71-year-old had absorbed a couple of huge hits that included losing $9.5 million on the Cincinnati Bengals to win Super Bowl LVI in February and more than $6 million on Alabama to win the College Football Playoff in January.

A man about to win $75 million. pic.twitter.com/PKyvU6RC66

McIngvale made seven-figure wagers with two other sportsbooks besides Caesars in Louisiana: $1 million with WynnBET in May and $2 million with Barstool Sportsbook in mid-July. Of all the wagers placed, the 71-year-old got his best odds at WynnBET, which paid out $12 million for his wager placed at +1200.

Barstool counted out more than $10.6 million in winnings payable to the furniture magnate, paying out his wager made at +533. McIngvale made four $500,000 wagers through BetMGM in Nevada via the Bellagio at +500, resulting in $10 million in winnings.

Iowa’s November numbers will be skewed

We have a special message from the founder & CEO of @Betfred, Fred Done

McIngvale’s other two $1 million wagers were made in July through Betfred and Unibet in Iowa and represented a sizable portion of both sportsbooks’ handle in 2022. In the case of Betfred, the wager accounted for nearly 16% of its $6.2 million handle through the first nine months of the year.

Depending on how well the sportsbook fared in October in the Hawkeye State, it would seem likely that Betfred’s all-time revenue will flip to being more than $3 million in the red as it had generated slightly less than $1.5 million — under $500,000 when excluding Mattress Mack’s bet — since taking its first wagers there in July 2020.

The Unibet wager presents a unique scenario in the sense that the Malta-based sportsbook announced last week during its quarterly earnings it was leaving the Iowa sports wagering market. McIngvale’s $1 million bet accounted for close to 35% of its $2.9 million in 2022 handle through September and 19% of its all-time handle after entering the state in September 2021.

“We are happy to congratulate Jim McIngvale on his successful bet on the Houston Astros. As one of the largest online betting operators globally we occasionally take on these bigger bets, and seen as a part of our overall sportsbook business it is a small exposure”, said Henrik Tjärnström, CEO Kindred Group, in a statement released early Monday morning from Malta.

Excluding the wager, Unibet had generated $123,766 in revenue in the first nine months of the year and less than $250,000 overall.

Because the Iowa Racing and Gaming Commission counted the $1 million wagers toward revenue in July, they accounted for nearly 20% of the $11.2 million in adjusted revenue for that month. Statewide, sportsbooks in Iowa have never recorded a losing month since launching in August 2019, and the only non-COVID impacted month it finished with less than $1 million in revenue was in February 2020 at $755,334.

Digging out of a $10 million hole, though, could prove challenging since Iowa sportsbooks have posted $10 million or more in revenue just 11 times in 38 months of reporting through September.