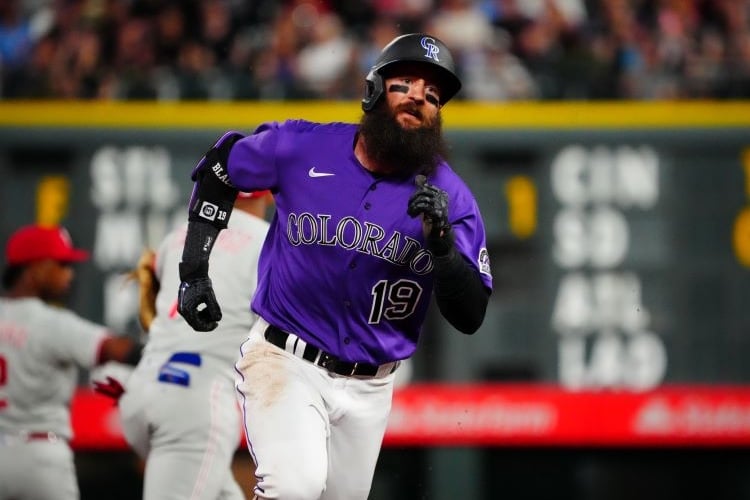 When the two sides agreed on a deal on March 10, speculation mounted that a player with international appeal such as Shohei Ohtani or another former MVP like Los Angeles Angels teammate Mike Trout could land the first deal with a legal U.S. sportsbook. But the first signing features neither a name on that level nor one of the more widespread mobile sportsbook apps.

MaximBet surprised many on Wednesday when it announced a landmark deal with Colorado Rockies outfielder Charlie Blackmon.

Under the deal, Blackmon becomes MaximBet’s first active professional athlete ambassador from the four major U.S. professional sports leagues. Selected in the second round of the 2008 MLB Draft by the Rockies, Blackmon ranks second in franchise history in hits, games played, and at-bats. Known for his distinctive bushy beard, the four-time National League All-Star captured the league’s batting crown in 2017 with a .331 average.

Something big is on deck at MaximBet… pic.twitter.com/zumn3BatwB

“As I learned more about MaximBet, I knew this absolutely was the right brand for me,” Blackmon said. “MaximBet has really attached itself to the local Colorado community, and I cannot wait to have some fun with MaximBet and surprising fans with incredible ‘money can’t buy’ experiences all season.”

MaximBet, which went live in Colorado last September, plans to debut next in two Midwestern states, Indiana and Iowa. Owned by Carousel Group, MaximBet also has market access in New Jersey, Ohio, and Pennsylvania, as well as in Ontario, Canada’s most populous province.

“Charlie is one of the most revered Rockies players of all time,” MaximBet CEO Daniel Graetzer said. “We are thrilled to welcome Charlie to the MaximBet family. We look forward to him hitting it out of the ballpark for us as we continue to grow in Colorado and across the country.”

A shift by MLB

While Blackmon is the first active MLB player to sign with a sportsbook, he is not the first from any of the major professional leagues to partner with a sports betting operator. That distinction goes to Edmonton Oilers forward Connor McDavid, who inked a partnership with BetMGM last month. On Monday, Phoenix Suns forward Jae Crowder formed a partnership with Arizona-based Gila River Resorts & Casinos, hours after his team’s victory over the New Orleans Pelicans in the NBA Playoffs.

As it relates to baseball, the Detroit Tigers became the first MLB team to sign a sponsorship deal with a U.S. legal sportsbook when the franchise agreed on a partnership with PointsBet last September. Meanwhile, both the Washington Nationals and Arizona Diamondbacks have multi-year deals with prominent companies to operate retail sportsbooks within the vicinity of their respective venues. Just two weeks ago, Caesars Entertainment notched a multi-year partnership with the Mets to become an official sports betting partner of the team.

But MaximBet’s deal with Blackmon breaks new ground. As the MLB lockout dragged into March, MLBPA negotiator Bruce Meyer noted that the new provision allows players to profit from their names and “likeness in new ways.” As part of the partnership, MaximBet is also collaborating with artist Marcus Rivero (commonly known as SolesBySir) to design various personal interest items for Blackmon. Given Blackmon’s affinity for fishing, Rivero designed a personalized tackle bag, fisherman’s scissors, and cooler for Blackmon, as well as co-branded Rawlings gloves and Nike cleats.

Under MLB Rule 21 (d), any player, umpire, or club or league official or employee caught betting on baseball will face a suspension of one year from the league. Under Colorado regulations, professional athletes residing in the state are also prohibited from placing sports wagers either retail or online. Prior to Colorado’s launch of sports betting in May 2020, a stakeholder at a Colorado Division of Gaming meeting on sportsbook regulations joked that it would be difficult to recognize any Rockies player inside a casino besides Blackmon.

Blackmon began growing the distinctive beard in the 2011 offseason after his rookie year ended prematurely due to a broken leg. By 2014, the first year Blackmon appeared in the All Star Game, the Rockies’ “Fear The Beard” campaign began to catch on.

From his beard to his beloved 2004 Jeep, Charlie Blackmon became an All-Star by doing things his own way https://t.co/FWptn6GR0Y pic.twitter.com/vGy3NDP4QY

According to Colorado regulations, MaximBet can offer player and team props on the Rockies as long as the offerings are not adjacent to marketing featuring Blackmon. In addition, Blackmon cannot promote baseball-specific promotions for the sportsbook, but he can promote signups, app downloads, the company’s loyalty program, and sports betting in general.

The Rockies will close out a three-game home series against the Phillies on Wednesday. Blackmon entered Wednesday’s game hitting .229 with one home run and four RBIs.