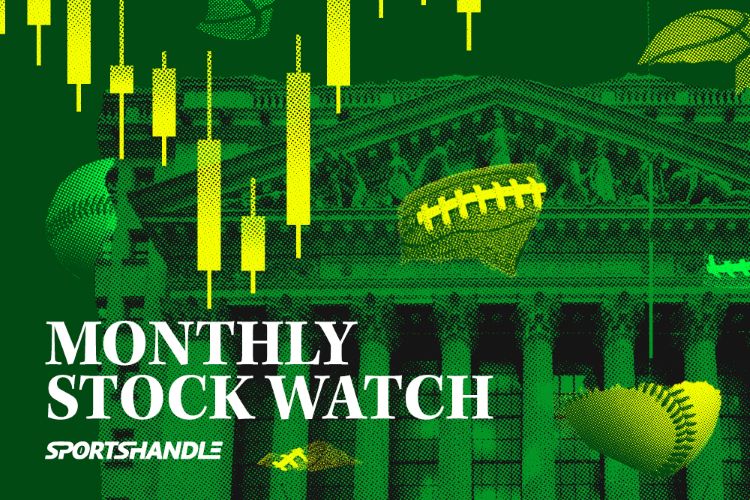 Battered by runaway inflation over the last six months, sports betting stocks sank even further in May in line with a larger market rout.

By the final week of the month, stocks rallied for a brief span into Memorial Day weekend in what some experts described as a “bull market within a bear market.” At that point, though, the damage had been done, as a host of major sports betting companies had already touched down to fresh 52-week lows. All told, stocks across the industry closed relatively flat after another volatile month of trading.

While DraftKings rebounded over the final week of May to close the month at $13.55 a share, the Boston-headquartered company dipped below $10 on May 12 to fall to its lowest level in a year. DraftKings traded at an intraday low of $9.77, a far cry from levels last spring when it approached $75. As with many industry counterparts, DraftKings fell sharply amid a deeper market sell-off despite posting considerable revenue gains over the first quarter.

“#DraftKings’ shares initially surged more than 5% in pre-market trading, rising above $15 a share as the company increased revenues by 33.6% over the same period from last year. The bounce was short-lived…”

Revenue gains notwithstanding, DraftKings was one of several gambling companies that experienced deeper net losses during the period. Both Caesars Entertainment and Wynn Resorts also posted net losses in excess of $150 million for the first quarter. Following the Super Bowl, a handful of top sportsbook operators began to rein in advertising after Caesars CEO Tom Reeg asserted that the intense commercial war for the sports bettor’s dollar could not be sustained financially on a long-term basis.

Despite recessionary risks moving forward, gaming stocks maintain a key advantage over other discretionary stocks in the current environment, according to Bank of America. For one, gaming stocks do not have any commodity or input cost risks, Bank of America Securities analyst Shaun Kelley wrote in a research note. At the moment, gaming stocks also maintain healthier balance sheets in comparison with the pre-COVID period, Kelley added.

“While we are not at an absolute trough, we are increasingly confident in estimates, presenting an opportunity,” Kelley wrote in the note. “While some discretionary stocks trade below historical troughs due to overearning concerns, we think the framework provided here could provide perspective and potentially even confidence in the sector.”

Beyond gaming stocks, all of the major indices slumped to one-year lows on the month, with the Nasdaq Composite Index down more than 25% at one point in May from its 52-week high.

DraftKings increased its full-year revenue guidance to a range of $1.95 billion-$2.05 billion after a strong first quarter in which the company had revenue of $417.2 million. DraftKings slightly beat analysts’ consensus estimates for the period, with revenue of $404.2 million over the first three months of 2022. On the earnings side, though, analysts are still concerned with DraftKings’ elevated marketing costs after the company reported sales and marketing expenses of $321 million on the quarter.

While DraftKings has reported expenses in the category above $170 million in each of the last five quarters, the figure is the highest since the company went public in 2020. DraftKings ended the period with roughly $2.34 billion in cash and cash equivalents, down about $880 million from the previous year’s quarter. With a relatively high cash burn rate, DraftKings may need to adjust its approach to marketing spending, according to gaming equities analyst Howard Jay Klein.

“If its promotional and marketing cost construct does not take a dramatic turn for reality central soon, it could burn through most, if not all, of its cash by the end of next year,” Klein wrote in a May 20 note.

DraftKings also announced the completion of its acquisition of Golden Nugget Online Gaming last month, in a deal worth about $450 million.

“Acquiring Golden Nugget Online Gaming gives us synergies across our business,” DraftKings CEO Jason Robins said in a statement. “We anticipate that this acquisition will provide meaningful revenue uplift by utilizing our data-driven marketing capabilities and a dual brand iGaming strategy.”

During a May trading update, Flutter credited successful launches in Louisiana and New York for an increase of 45% in U.S. revenue over the first period. As of May 5, FanDuel maintained an online sports betting market share of 37% in the markets in which it operated, the company said.

Flutter, the parent company of FanDuel, is pleased with economics surrounding player acquisition costs, which remained under $300 per customer during the period. At the same time, Flutter noted that the average payback period per state, or the time it takes the company to achieve profitability, continues to fall within a range of 12 to 18 months.

Over the next few weeks, Flutter could resolve a lengthy dispute with Fox Corp. over the fair market value of its minority stake in FanDuel Group. If a settlement is not reached over the next 13 days, a hearing is scheduled for June 20 in New York’s Judicial Arbitration and Mediation Services (JAMS). Fox Corp. CEO Lachlan Murdoch indicated last month that he expects arbitration surrounding the matter to be completed by the summer.

During BetMGM‘s annual investor day presentation on May 12, the company indicated that it added operations in nearly a dozen North American markets over the last year, increasing its total to 23. Among online sports betting and iGaming customers combined, BetMGM covered about 41% of the U.S. population, it noted in the presentation. BetMGM is a 50/50 joint venture between MGM Resorts and Entain, a European gaming conglomerate. 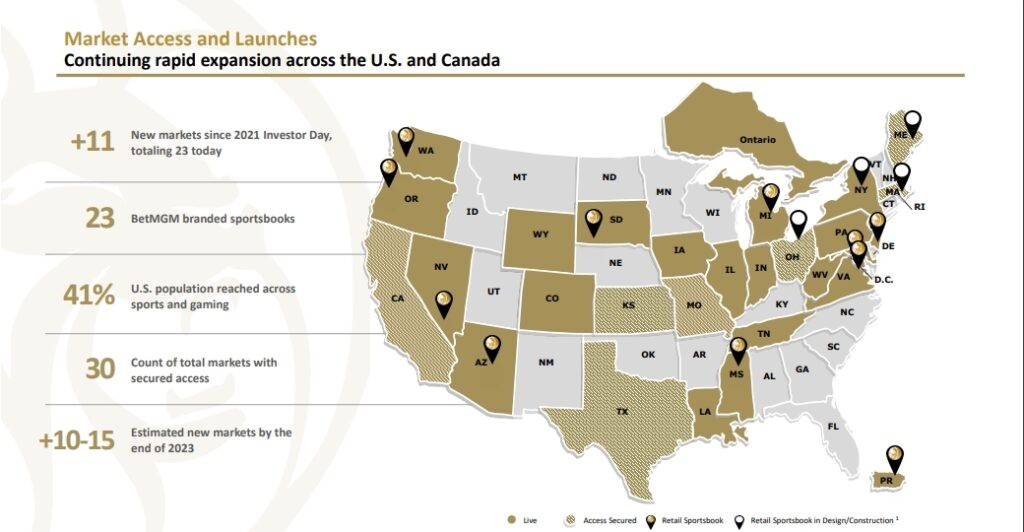 BetMGM now projects the total addressable market (TAM) for online gaming in the U.S. and Canada to reach $37 billion at maturity. Online sports betting in the U.S. is projected to represent about $17.6 billion or 47.6% of the overall North American TAM, according to BetMGM. In addition, BetMGM projects that roughly 80% of the U.S. population will take part in online sports betting in some form, resulting in average gross gaming revenue of about $90 per customer.

In terms of in-play betting, BetMGM noted that it experienced year-over-year growth of 160% in live betting over the previous 12 months. The uptick comes as U.S. sports betting customers continue to gradually transition from pre-game to in-game betting, a form that is more popular in Europe. BetMGM also reported an increase of roughly 400% in single-game parlay activity in comparison with the previous year.

Among sports betting data providers, Sportradar fell below $10 a share in early May, then closed the month at $9.39, down about 25% on the month. Sportradar generated revenue of $186.4 million in the first quarter, a year-over-year increase of 31%, but reported adjusted EBITDA from its U.S. segment of minus $6.3 million, primarily due to its league and team partnerships, according to the company. Genius Sports, Sportradar’s main competitor, ended May at $3.06 a share, down 25.5%.

In Q1 @Sportradar reported Adj EBITDA of €26.7M, a decrease of 5% from Q1 of 2021. In the U.S., Radar's Adj. EBITDA decreased to Minus-€6m, primarily due to its league and team partnerships, according to the company. In total, SR generated revenue of $186.4M, a 31% increase YOY pic.twitter.com/Qct2Vwck1y

Kambi, a prominent B2B sports betting tech provider, jumped more than 40% on the month amid merger speculation. Kambi has emerged as a hot acquisition target after scrapping a so-called “poison pill” with Kindred Group that limited the supplier from being acquired. Wynn Resorts, Caesars Entertainment, and Rush Street Interactive all closed the month lower.

The Roundhill Sports Betting & iGaming ETF (BETZ), an exchange-traded fund that tracks the top sports betting and iGaming stocks in the industry, closed in May at $15.95, down about 17% on the month. By comparison, BETZ hit a record high of $32.65 in April 2021, reaching a level that more than doubled its June 2020 debut.