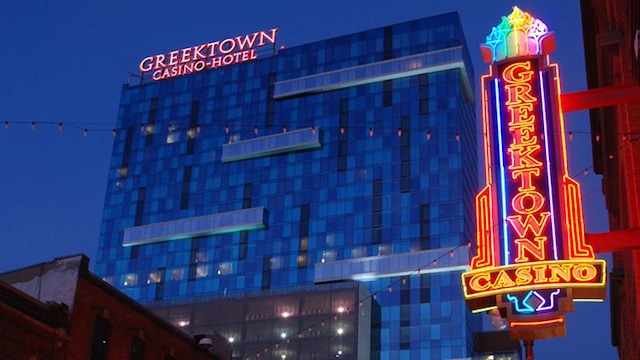 The Greektown Casino in Detroit.

So far the National Basketball Association, Major League Baseball and PGA Tour are 0-for-7 in persuading state lawmakers to mandate payment of an off-the-top “integrity fee” or “royalty,” putting a percentage of legal sports bets into league coffers.

Now, a key lawmaker in Michigan sponsoring a bill that would legalize sports betting and iGaming in the state could give a win to the leagues.

According to a report from Reuters, following a U.S. Sports Betting Policy Summit in Washington D.C. this week, Michigan state representative Brandt Iden (R-District 61) changed his mind on the fees after “spending significant time with the leagues.”

Michigan state Representative Brandt Iden said at the conference that he expects a bill introduced last year to allow mobile gaming to soon pass, and he hopes it will be signed by the governor by the end of this year.

That would allow Michigan to implement a statutory framework for sports betting next year, then combine it with this year’s legislation so both online and retail sportsbooks could roll out at once.

Iden, chairman of the Regulatory Reform Committee, would consider including integrity fees paid to sports leagues – a portion of sports betting revenue – to help them fight game fixing. The casino industry opposes the fees, and no other state has passed legislation that includes them.

In a conversation with Sports Handle on Friday afternoon, Iden expanded on his position:

“I believe that there’s an opportunity to have a holistic discussion to ensure we are coming up with the best policy where all parties involved feel they have a fair shake in the policy discussion. We’re still having conversations to ensure all voices are heard.”

“Whether [a fee is] off-the-top or otherwise, my goal is to take 2019 to put the best policy together we can, while having everyone’s voices heard,” he said. “My goal is to spend 2019 on this.”

What’s unusual here is that the leagues have abandoned the “integrity” argument. An MLB official at an October industry conference explicitly asked moderator Scott Van Pelt of ESPN to have a panelist not call it an “integrity fee.”

“There is a lot of misinformation, starting with the name,” said Kenny Gersh, a Major League Baseball executive vice president. “We don’t call it an integrity fee. I’ll call it essentially what it is, which is a royalty. Also, 1 percent [of the total amount wagered] is not anything we’ve been asking for since the very beginning, since we realized that was not the correct amount. So we have been talking about a quarter point.”

So is Michigan looking to kick in a percentage of dollars that otherwise could benefit the state — in the name of integrity, or compensation for “intellectual property,” as NBA officials have put it. Or some other purpose?

In any case, it would be a very welcome victory for the leagues, which have expended significant energy and travel dollars fighting for an “integrity” fee or “royalty.”

There’s no guarantee at this point the final version of Iden’s Lawful Internet Gaming Act (House Bill 4926) will mandate such a payment, or that Iden’s bill is the one that crosses the finish line this year or in 2019, given additional moving parts in the gaming picture overall. There is also disagreement as to whether or not  the state constitution requires voter approval for gaming expansion.

Why the Change of Heart?

Let’s return to sports betting and the “integrity fee” debate.

“We all know that sports betting is coming and [this bill] sets the framework [for the gaming commission], but realistically, I don’t think they’ll do that that until we have laws for the brick-and-mortar casinos in place,” Iden told Sports Handle in June.

He added: “At the moment, I think [the integrity fee] is a non-starter. It’s important that all the states do something similar and I don’t want Michigan to be different or put Michigan at a competitive disadvantage.”

Lawmakers in the states to legalize sports betting so far — Arkansas, Delaware, New Jersey, Mississippi, Nevada, Pennsylvania, Rhode Island, West Virginia — have rejected paying the sports leagues a cut of wagers from state-licensed sportsbooks in the name of “integrity” or as a royalty. Arkansas just legalized sports betting by ballot initiative last week, and it is unclear if a fee to the pro leagues is on the table for the state’s gaming commission.

Lawmakers in Kentucky, a state poised to legalize in early 2019, have been openly hostile toward the notion of paying a fee. Kentucky is facing a massive pension budget deficit and while most lawmakers recognize that sports wagering tax revenue would represent only a few raindrops in a swimming pool, it’s something.

Separately, Iden specifically mentioned the MGM-NBA deal, which will afford MGM among other things the league’s “official” data for making and grading pregame and in-game wagers. In all states, the leagues are looking for legislatures to mandate use of “official” data. And that’s one place he says he won’t go.

“One issue I can’t support is using official league data. I do not believe that’s constitutional — that I can structure piece of legislation that directs one private entity to pay another for information, or for anything for that matter.” He continued, “I do believe that there are great opportunities for private partnership, and I think those are not suited for putting anything in statute.”

New York, which is gearing up to do something on sports betting in 2019, has a bill in committee that would grant sports leagues 0.20 percent of all sports wagers at licensed sportsbooks — as a royalty. However the sponsor of the bill in the state senate, John Bonacic, did not seek re-election and will be out of the legislature come January. In a state with a population as large as New York’s, that would have been a huge win.

Elsewhere, NBA Commissioner Adam Silver said in July, “My view is we should be compensated for our intellectual property, but we can do that directly, again, with commercial relationships with gaming establishments.”

Two weeks later, the NBA struck a deal with MGM Resorts International, designating the gaming and hospitality giant an official gaming partner of the league for a reported three years and $25 million dollars.

Interestingly the NHL and NFL have broken with the NBA and MLB on the “integrity fee” front. Neither league has sought a direct cut. In fact the NHL has openly rejected, or scoffed at the notion.

“Integrity fees are something we’ve never pursued,” said NHL commissioner Gary Bettman in October. “I’ve never worried about integrity of our game. … it’s been strong throughout a period where betting was done not through legal sportsbooks.”

“We monitor all of the games anyway through third party resources,” Bettman continued. “It hasn’t been an issue and we don’t anticipate it being an issue. The concerns others may have aren’t applicable to our game.”

Incidentally, if the NBA and MLB are successful at securing a fee in Michigan or New York or elsewhere, whatever it’s called, the NHL and NFL would benefit at the same percentage, unless those leagues are specifically carved out.

But the inclusion of such a payment may not have any impact on other states contemplating legalization of sports wagering.

That’s the beauty of the elimination of PASPA — each state is now free to consider its own needs and send newfound tax revenue to aid whatever problems need attention.  And in each state, there are many.