Michigan Lawmakers Pause On Sports Betting To Iron Out Budget 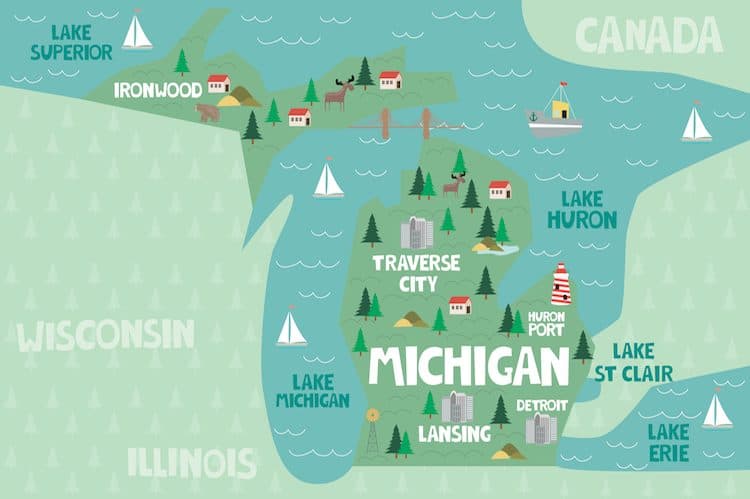 Michigan Representative Brandt Iden is used to roadblocks, so the latest delay in taking action on sports betting is merely a speed bump. Earlier this week, Iden took sports betting off the table temporarily, while state lawmakers work to meet an October 1 budget deadline.

“We’re in the process of working on our budget, … and I had been working diligently to try to include iGaming, sports betting and everything that I’ve been working on (in the budget), but because of some other things I wasn’t successful,” he told Sports Handle Thursday. “Hopefully, we’ll revisit everything in October.”

Despite the delay, Iden is confident that sports betting can get through the state legislature by the end of the year. On Tuesday, it was sent to the Ways and Means Committee, where it will wait until the budget is sorted out.

Iden doesn’t just have the optimism of someone who’s been working on sports betting for three years — last year, Iden shepherded a package of gaming bills that set the table for legal sports betting all the way to the governor’s desk, only to have lame-duck Governor Rick Snyder veto it all on eve of New Year’s Eve weekend. The point being, Iden has support in the legislature — and from the powerful tribal gaming stakeholders in the state. Now, all he has to do is convince rookie Governor Gretchen Whitmer to sign off.

Given Michigan’s existing gaming infrastructure, Iden doesn’t think it’s unreasonable to hope that patrons could place bets at retail sportsbooks by March Madness, or, in a more perfect world, the Super Bowl. Of course, that’s assuming the legislature and Whitmer legalize it.

If there is a stumbling block at this point, it is taxes. Iden’s current bill calls for an 8 percent tax rate on licensees’ sports betting gross revenue. He says Whitmer wants 15 percent. And on the iGaming front, Whitmer wants a 40 percent tax rate, which Iden says would make it the second highest in the country. With regard to both tax rates, Iden is willing to negotiate, but he’s clear that he thinks 15 percent is too high. Potential operators have urged tax rates of 10 percent or less, given the smaller margins in sports betting.

“I am adamant that we have to keep it at 10 or below,” he said. “I’ve seen those studies and understand what works and what doesn’t.”

But even at the current 8 percent in the bill, Detroit’s three casinos will be paying more than 10 percent on sports betting — the city has a 3.25 percent local tax.

All the way to 2018, Michigan looked like it would be a first mover on sports betting. But between politics and negotiating with the state’s tribal interests, the Wolverine State has fallen far behind its Midwestern peers. Just this year, Illinois, Indiana, and Iowa have all legalized sports betting, and sportsbooks are live in both neighboring Indiana and Iowa, where mobile sportsbooks have also launched. Illinois legalized early last summer, and is in the process of developing regulations. Ohio lawmakers are seriously discussing sports betting, and Wisconsin lawmakers are at least open to the idea, the State Journal reports.

“With Illinois and Indiana (legalizing), and Ohio trying to get it together, Michigan will be left behind in the Midwest, so that makes it incumbent upon us to move forward,” Iden said. “We’ve got a really good really bill, we’ve been working on it for three years.”

In its current form, the bill does contain one other potentially contentious requirement — it calls for a mandate to use “official league data” on in-game wagers. Should Michigan lawmakers move forward with the mandate i tact, it will become the third state behind Tennessee and Illinois to require sportsbooks to purchase data from the professional leagues’ authorized third party suppliers. Some stakeholders agree that official data is the best available and have deals with certain suppliers, but in general, they don’t want to forced buy government to engage in a commercial agreement.

Iden ultimately decided to include the mandate, which it appears stakeholders and potential operators will swallow to get sports betting legalized, because he feels “it’s a good compromise.” Like Chicago or Boston, Detroit’s pro sports teams owners, from the Ford family (NFL Lions) to Little Caesar’s magnate Mike Ilitch (NHL Red Wings and MLB Tigers) to relative new sports team owner Tom Gores (NBA Pistons), have deep ties to the community and lots of pull,  both in business and politics.

Iden has been juggling those interests alongside negotiating with Michigan’s tribes, which operate more than two dozen casinos across the state. Part of the sticking point is that when one group of tribes negotiated its pact with the state in 1993, it did not contemplate sports betting. Iden has developed enough good will to get those tribes on board with his legislation in exchange for a promise that Whitmer would agree to renegotiate those pacts to include sports betting. Iden said Whitmer would have to commit to the tribal renegotiation prior to signing off any sports betting law. Of the states that have legalized to date, none have as big a tribal gaming presence as Michigan.

Iden’s 4916 is tie-barred to the iGaming bill  HB 4311, which means that bill must pass in order for sports betting to become legal.