Amid problem gambling and latency concerns, another side of the story emerges 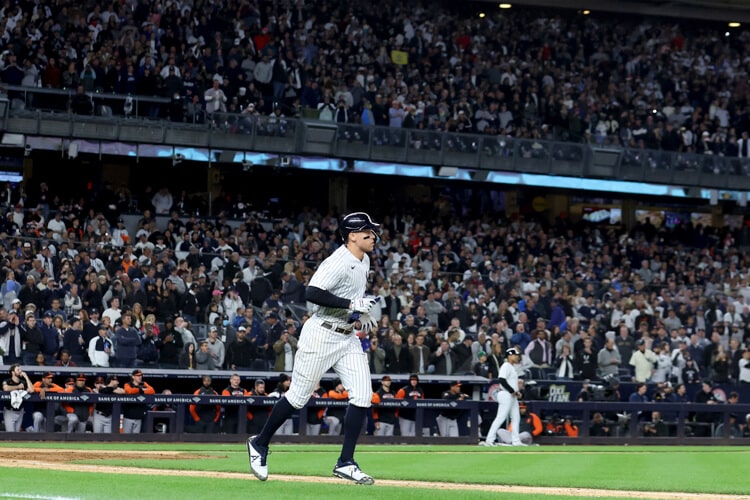 A furniture and appliance salesman in the small town of Emporia, Frye was eager to try his hand at the newly legal form of wagering, but didn’t want to risk much of his hard-earned money. After signing up for a DraftKings account, he discovered micro-betting, a type of wagering that’s tied to the result of a certain play or series of plays rather than the final outcome of an entire sporting event.

Give someone with a predisposition for addictive or compulsive behavior the ability to place a bet every few seconds or minutes instead of hours, and micro-betting may sound like a pretty slippery slope. But there’s another side to that coin.

“Micro-betting, to my mind, has been better for me as a pretty new gambler,” said Frye. “I usually go $1 or $5 [per bet]. I’m kind of stingy with my money sometimes. I don’t like to make the big bets. If I get on a roll, I’ll probably make upwards of five to six [micro-bets per game]. If I’m not quite feeling it or am not invested in the game, I’ll back down a bit.

Frye’s logic resonates in the Pacific Northwest, where a pair of fraternity brothers at the University of Oregon have taken a shine to micro-betting through DraftKings, which currently has a mobile sports betting monopoly in that state.

Liam Dauphinee likes to “bet very small units, between $1 and $5” on the result of an occasional Major League Baseball at-bat or NFL drive.

“I think it’s just a new way of watching the games,” Dauphinee said of micro-betting. “With a frat, people come over to your house all the time. In our fraternity, sports is by far the biggest thing that brings people together. … All the kids with us, we don’t have huge bankrolls, so for us, it’s super small — just a way to stay engaged with the game.”

Dauphinee’s fraternity brother, who asked not be be identified by name, coaches youth football and said he doesn’t “really have time to watch a four-hour [pro] game.”

“I get home from practice in the third quarter [of an NFL game], watch a couple drives,” he explained. “The whole micro-betting thing is kind of fun. You can tell how the momentum is shifting. … The pace and flow of the game, it’s fun to bet those individual drives. … What I think’s gonna happen is down to gut — they’re starting on their own 5, their running game sucks. It’s the kind of thing you pick up being around the game and coaching.”

But the anonymous Oregon bettor, who’s no longer in college, said he bets more on traditional pre-game markets like spreads and over/unders, calling his in-game and micro-bets “more like appetizers.”

“You don’t want it to break your bank,” he added.

This is mostly music to the ears of micro-betting proponents like Mark Nerenberg, chief operating officer of the B2B provider Simplebet, which powers micro-betting products for the likes of bet365, Betway, and DraftKings.

While Nerenberg concedes that the average present-day micro-bettor “is someone who’s sport-bet before,” the ultimate “vision is to attract the masses and casual fans.” Echoing the sentiments of the young bettors in Kansas and Oregon, Nerenberg added, “It’s quite a commitment to sweat the whole game versus jumping in for a drive or two to make some bets and have some fun and jump out.”

Micro-betting is a subset of in-game — or in-play — wagering, which allows gamblers to bet on shifting lines, totals, and player props during the course of a sporting event. In-play (also called “live”) wagering is already more popular than pre-game betting in Europe and other mature foreign markets, and many believe it’s only a matter of time before it reigns supreme in the United States as well.

But foreign bettors tend to favor soccer, which Nerenberg said is “not a great fit” for micro-betting due to the dearth of scoring, and tennis, where “will they win or lose the next point” is “pretty much it.” By contrast, sports favored by American bettors — football, basketball, and baseball, primarily — pair nicely with micro-betting, which is why Nerenberg thinks it will account for “a big chunk of in-play in the U.S.”

PointsBet Chief Product Officer Mark Hughes agrees with Nerenberg’s opinion that micro-betting has far more potential to catch fire in the U.S. than it does abroad. And with PointsBet just launching its Lightning Bets feature for NFL games, Hughes believes that micro-betting “could become a very significant part of betting.”

Yet Hughes views micro-betting as a tasty slice of the pie, rather than the pie itself.

“Micro-betting is a segment within live betting,” he said. “But not all customers are created equal. A big segment moving as fast is same-game parlay. They’re a complete opposite type of bet — all these events need to happen and you get a big payout. Micro-betting — it happens, you’re done. If you just have one type of product and it’s micro-betting, you’re just getting one type of bettor.”

But Simplebet and an offshoot of sorts, Betr, are just fine with that type of bettor.

Before Joey Levy started Betr, a B2C micro-betting collaboration with ultra-influencer Jake Paul, he co-founded Simplebet. Paul was a substantial investor in Simplebet, so when the pair splintered off to form Betr, it made waves in the industry.

But the relationship between Simplebet and Betr is far from acrimonious, as the latter is a current client of the former.

“[Levy’s] vision initially was all about user experience,” explained Nerenberg. “Simplebet evolved into figuring out how to do automated operations of in-play and micro-betting and to be a B2B company. But he’s passionate about B2C, so he partnered with Jake Paul and co-founded Betr and they’re one of our customers, just like DraftKings or bet365.”

Echoing comments he made at the Global Gaming Expo in Las Vegas, Levy recently told ESPN that his plans for Betr include prohibiting credit-card deposits and imposing deposit limits on customers between the ages of 21 and 25.

“People talk about responsible gambling and how it’s important to them, but I don’t think anybody’s actually taking any actions that reiterate it to their employees, regulators, and, most importantly, to the consumers themselves that it’s really important that you gamble within your means,” he said. “This is all about entertainment value. The house always wins in the long run, right? The consumer should know that. We shouldn’t be trying to extract as much money from the consumer as possible, because I think that’s a really short-term way of viewing things.”

Long term, Levy told ESPN that Betr “needs to feel similar to a consumer going to the movies and spending $20. They don’t get anything in return for that $20, except for two hours of entertaining. That’s how operators in the space should be approaching it.”

“We’re going after the customer that follows sports, but follows betting more,” he said. “We want to have something really engaging and entertaining, and that’s live betting. The whole purpose of placing the bet is we want to feel the excitement of seeing the bet live. That means you won’t close the app. Live betting feeds instant engagement, frequency of entertainment.”

Since launching Lightning Bets for NFL wagers a few weeks ago, PointsBet says it has taken an average of 3.6 lightning bets per customer. Its largest Lightning Bet, meanwhile, was a $15,000 losing wager on the “result of the 17th drive” of the Oct. 9 Bengals-Ravens game.

As far as Simplebet is concerned, Nerenberg said the median bet size on its platform is about $5, but that “the mean is a little higher because, like with any type of gaming, your top 10 percent drives things.” Nerenberg added that most of Simplebet’s NFL action comes during “island games” — Monday Night Football, Thursday Night Football, and Sunday Night Football — and that “there are certainly sharp punters who are finding ways to beat our markets.”

“When he was getting close to 61, 62 [homers], pitchers weren’t pitching to him as much and we weren’t factoring that into the odds on a walk,” Nerenberg said. “You could have made a lot of money betting walk on Aaron Judge.”

When PointsBet gets beat in its micro-betting markets, it’s typically on account of latency — time delays between when a live event actually happens and when it shows up on betting, broadcast, or streaming feeds.

“Micro-markets are a little different than any of the other markets,” said Hughes. “You’ve got pricing inaccuracy anywhere. Micro-markets are more complex to price — low-latency feeds, quick algorithms. But we invest a lot of time and very experienced people to price it. We find that people placing bets, they’re not necessarily any sharper on Lightning Bets than other types of markets, but where they do sometimes get an edge is on latency. It’s really obvious when that happens — a high correlation of being absolutely spot-on in accuracy.”

Nerenberg acknowledged that latency is a problem live markets continue to grapple with, and considers more up-to-the-minute game-tracking technology to be crucial to improvement within this realm.

“Eventually there will be low-latency streaming and video for fans to watch the game,” he said. “I think the technology is either already here or will be very soon. There are some companies that claim to have it. I haven’t seen it at scale yet, but I know it’s being worked on. There are probably other aspects that might delay it, like rights from the leagues. It’s coming. I just don’t know if it’s two or five years away.

“I still think it’s underrated how much people enjoy tracking the game with a game-tracking visualization. I know a lot of people who do it for fantasy [sports]. Maybe you’re with some other people and not everybody wants to watch the game on TV, so you can check on your phone. I think fixing that will move the needle a lot.”