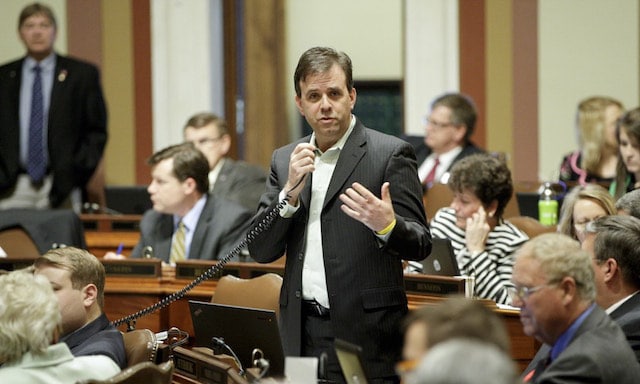 Garofolo on the House floor

Sports wagering for Minnesotans should be on the way, but won’t happen unless local residents get behind the effort to make it happen, according to State Representative Pat Garafolo (R), the seven-term legislator and avid sports bettor who’s currently leading efforts to get a bill before the state legislature when it reconvenes in January.

However, as he told the locally based Great Time Podcast with John Kriesel, just because something is popular doesn’t mean it’s going to happen. Garafolo said he’s optimistic that the various gaming interests in the state —  tribal gaming, charitable gaming and others — will reach common ground on the issue.

“We need flexible legislation that works for everyone,” said Garafolo, who represents District 58B, which includes portions of the southeastern Twin Cities metropolitan area in Dakota and Goodhue counties. “We have to have a low-tax, low-fee environment. We just can’t go in and tax the snot out of this industry. The illegal sports betting market is very robust, so we have to have the right kind of regulations to compete with that.”

Garafolo added: “There’s money to be made, but it’s not like slot machines. Margins are small, in the neighborhood of five percent. It’s a high-volume industry, but a low-margin industry.”

Episode 2 of the Great Time Podcast is now available on the iHeart Radio app. My guest today was @PatGarofalo who (among other things) discussed how he will get sports betting legalized in Minnesota. https://t.co/ED57RLXV92 pic.twitter.com/jHZoJhcsNu

Garafolo, an avid sports fan, says he wants Minnesotans to be able to make sports bets on mobile devices throughout the state, but opposes an online option for other casino games, as has become popular in New Jersey. He says sports wagering kiosks in taverns is a possibility, but that’s just one of a seemingly infinite number of sub-issues (including betting on local college teams) that needs to be resolved with gambling stakeholders in the state.

He said he’s concerned that if a consensus can’t be reached on what is a bipartisan issue, sports wagering legislation won’t go anywhere. Garafolo is urging fellow lawmakers to get a law and accompanying regulations ready as early as possible in 2019, to be up and running for the next football season.

“We have to make that happen,” he added.

Minnesota Public Radio reports that since the start of June, the MLB, NBA, NFL and the PGA Tour have all registered new lobbyists in the state with the expectation they will intensity their focus on sports betting as it comes under discussion next year.

In 2018, a 14-page draft bill circulated in the state legislature that would establish a Minnesota Sports Wagering Commission, but the bill was not formally introduced.

Minnesota is currently home to 40 tribal gambling operations. Other legal gambling activities in Minnesota include licensed charitable gambling, including pull-tabs, paddlewheels, tipboards, bingo and raffles. The state also has a government-run lottery, poker and pari-mutuel betting on horse races. Charitable gambling sales are especially robust in Minnesota, and pegged at more than $2 billion annually.