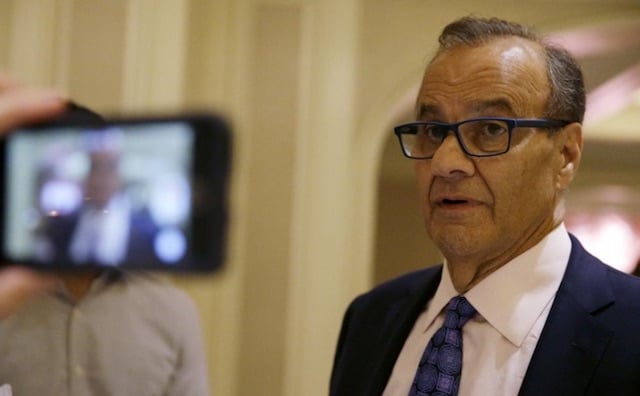 It’s a 140 mile drive from Yankee Stadium to the New York State Capitol Building in Albany. And during the last few weeks, the state house has felt a bit like the post-retirement reunion spot for former pinstripes wearers. Just a week after former catcher and manager Joe Girardi visited lawmakers on a quest to get lawmakers to give Major League Baseball a cut of the sports betting pie and other beneficial terms, legendary Yankees manager Joe Torre rubbed elbows with state legislators on Monday.

Torre, who was inducted into the Hall of Fame in 2014 and won four World Series titles with the Yankees, was in Albany for closed-door meeting with Governor Andrew Cuomo to discuss sports betting. Before the meeting even started, Torre was taking photos, schmoozing, and smiling with state lawmakers at an Italian-American event near the state capital.

According to the Associated Press, Torre appeared “uncomfortable” to be in the role of lobbyist. But his comments, while somewhat circumspect, certainly echoed Major League’s Baseball’s desire to have an integrity fee or royalty included in any legislation.

“I’m not trying to lobby one side or another,” Torre told the AP. “I just want you to take care of our game. … The law is coming so I think it’s important for New York to be out in the forefront and get something passed that again, protects the integrity of the game this session.”

Legendary Yankees Manager Joe Torre Wants to ‘Protect the Integrity’ of Baseball, He Said During a Visit to Albany to Discuss NY Sports Betting Monday.

Torre went on to suggest that sports betting could undermine the game.

“The fans trust us in baseball and I’d hate to jeopardize that. That’s too important,” he said.

Torre’s baseball legend may have been cemented as skipper of the Yankees, but he also had an 18-year career with three MLB teams, dating back to 1960. During that time, he was a nine-time All-Star and has since been inducted into the St. Louis Cardinals Hall of Fame. Torre, 77, is currently MLB’s Chief Baseball Officer.

It looked an awful lot like the state of New York would be among the first movers with regard to legalizing sports betting after the Supreme Court struck down the Professional and Amateur Sports Protection Act on May 14. But state lawmakers seem to be at a crossroads. Home to eight major professional sports teams – two each from Major League Baseball, the NBA, NFL and NHL – New York has been in the spotlight with regard to sports betting legislation.

Lawmakers in State of New York at a Crossroads With Regard to NY Sports Betting. Some in Favor, Some Not and a June 20 Deadline Looming.

As the conversation has continued, the professional leagues, all of which have offices in New York City, have been lobbying states across the country to include a so-called “integrity fee” in any sports betting legislation. The idea being that sportsbook operators should pay the leagues for taking wagers on their games, or their “product” as the leagues say.

How exactly that money would be used  remains unclear. A frequent face at state hearings on sports betting, MLB executive Bryan Seeley, Senior Vice President and Deputy General Counsel of Investigations, Compliance and Security told The Athletic on May 22:

“Obviously, some of that fee is designed to cover our costs that I talked about. But we acknowledge that the fee is going to be more than our costs, so that revenue would go to our clubs just like any other revenue would.”

What is clear is that states, including New York, aren’t completely sold on asking sportsbooks to pay an additional fee.

New York has four commercial casinos, which under current New York law could offer sports betting as soon as they get the OK from the Gaming Commission. But while Senator John Bonacic (R-Orange County), head of the Senate’s Committee on Racing, Gaming and Wagering, is pushing for expanded sports betting legislation, Assembly Speaker Carl Heastie (D-Bronx) isn’t so enthusiastic.

“I am not a big fan of gambling, but again it’s legal here in the state,” Heastie told the New York Daily News last week. “The members will decide.”

The state assembly is set to adjourn on June 20.

As that conversation continues, Girardi and Torre are pushing MLB to get what they believe is its due.

“I am here encouraging the New York legislators to pass a law that basically protects the integrity of the game,” Girardi said last week.

The pro leagues, with MLB and the NBA leading the charge, have been lobbying states nationwide to include a 1 percent integrity fee in any sports betting legislation. The fee has been contentious. Neither Pennsylvania nor West Virginia, which have passed sports betting laws in the last months, nor New Jersey or Delaware, which will soon implement sports betting, have an integrity fee.

NY Lawmaker Bonacic has Offered a Compromise — a .25 Percent Integrity Fee for NY Sports Betting, Rather Than the 1 Percent Pro Leagues Want.

New York has been toying with how to handle the integrity fee and Bonacic says he has included language for a quarter of 1 percent fee from sportsbooks to be paid to the pro leagues.

“Integrity monitoring goes to the heart of their industry, for sponsorship, for faith in the product, for fan interest,” Bonacic told the Washington Post.

“I think it’s fair to do an integrity fee. Now that every state is rushing to pass laws in the state legislature, there’s going to be much more of a demand on professional leagues.”

On the Assembly side in New York, Assembly Racing and Wagering Committee Chairman Gary Pretlow has been expected to introduce a bill as well, but some apparent disagreement about a royalty for the leagues lingers.

Bonacic’s 7900A  was referred to the Finance Committee on May 21 and no action has been taken since. According to multiple reports, Bonacic is crafted new legislation, but it has not been introduced yet.