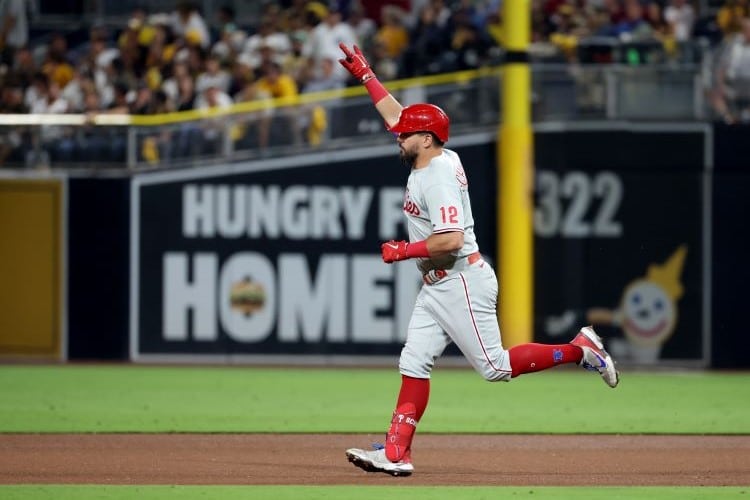 With the best-of-five series knotted at one game apiece, the Padres suddenly appeared poised to take a commanding lead against the heavily favored Dodgers. With a franchise-record 111 victories, Los Angeles remained the top NL choice to win the World Series at +340. The Padres lingered on the World Series’ futures market as the fourth choice at +600, behind the Astros, Dodgers, and Yankees.

But on the live NL pennant market, the sports betting odds fluctuated rapidly, as San Diego became the favorite to represent the National League in the World Series. The disparity created an arbitrage opportunity for astute bettors.

At the time, FanDuel installed the Padres as the +185 favorite to win the National League Championship Series (NLCS), ahead of the Phillies and the Dodgers at +220 and +260, respectively. Earlier in the day, the Phillies took a 2-1 series lead over the defending World Series champion Braves. By Sunday morning, the season ended for the Dodgers and Braves, with both sent home in surprising four-game defeats.

FanDuel simulates each game of every MLB playoff series, as its trading team takes into account an entire range of possible outcomes when formulating futures prices. Since FanDuel assigned such a high rating to the Dodgers, the anomaly resulted from the Dodgers’ price in future series being much shorter than those for the Padres, company spokesman Kevin Hennessy told Sports Handle.

Although the Padres became a slight favorite in the fourth inning to the win the NLDS series between the two California teams, the Dodgers would have been a heavier favorite in future series, he added. In other words, the Dodgers’ chances to win the World Series against an AL power such as the Astros or the Yankees appeared to be considerably better than the Padres’.

“That led to this extremely rare phenomenon,” Hennessy explained. 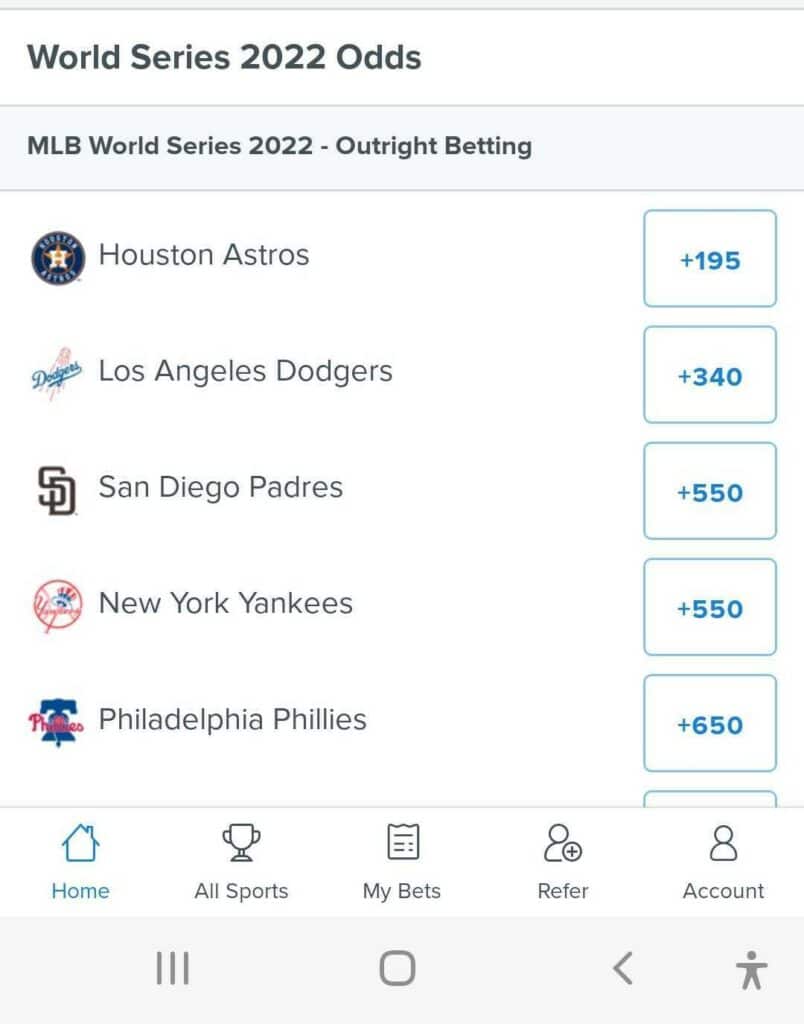 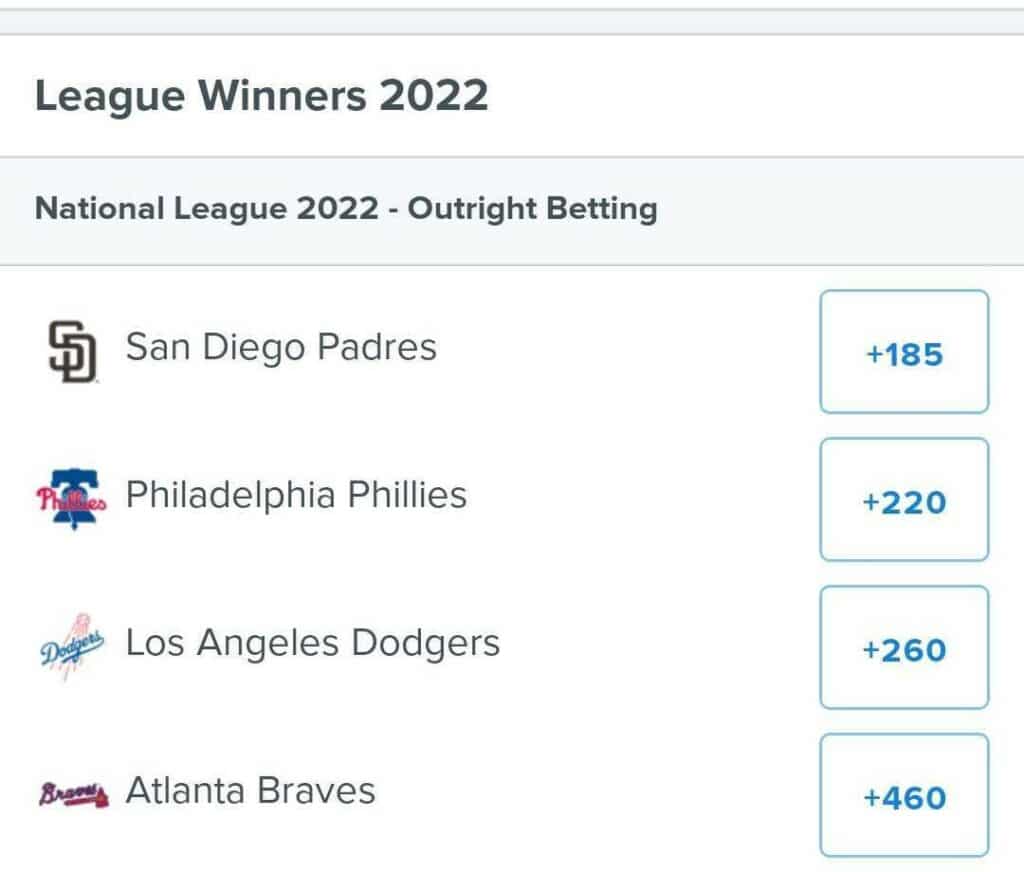 Price shocks on the futures market

The stunning upsets shocked markets, as the upstart teams dispatched the last two World Series champions. The Phillies entered the MLB wild card round with odds of 35/1, the biggest longshots of the 12 teams in the field. The Padres, meanwhile, eliminated a pair of 100-win teams in the Mets and Dodgers on their way to the NLCS. The Dodgers opened the playoffs as the +300 favorite to win the Fall Classic, just ahead of the Astros (+400), another 100-win team.

The @Padres closed as a +190 underdog at Caesars Sportsbook to win the series.

It's the 2nd-biggest betting upset in a playoff series over the last 10 seasons. The Nationals were +195 to beat the Astros in the 2019 World Series.

Jay Kornegay,  executive vice president of race and sportsbook operations at the Westgate SuperBook, indicated that the balancing act of calculating futures odds in the MLB playoffs becomes more challenging when a prohibitive favorite such as the Dodgers is eliminated early.

“You calculate that out, you’re looking at a team that won 111 games,” Kornegay told Sports Handle. “You look at those games that are left and the overall ranking of those teams.”

Kornegay emphasized that the task is less challenging when it comes to underdogs with steeper odds.

For instance, the Seattle Mariners had odds of around 40/1 to win the World Series in the 13th inning of Game 3 of their ALDS series against the Astros. By the bottom of the 17th, the odds fell to 25/1 when a runner advanced to second on a wild pitch by Luis Garcia. The relief pitcher preserved the shutout when he forced Mariners second baseman Adam Frazier to fly out to end the inning. The Astros took the lead in the 18th on a solo homer by Jeremy Pena, then eliminated Seattle when the Mariners couldn’t tie the game in the bottom of the 18th.

Over the course of the chaotic weekend in the MLB divisional round, Sports Handle tracked the live futures odds at six major sportsbooks: FanDuel, DraftKings, BetMGM, PointsBet, Caesars Sportsbook, and BetRivers. With four games on Oct. 15, the frenzied action kept bettors on their toes. At one point, the Yankees’ odds dropped from +600 to win the World Series to +350 within seconds of a two-run homer by Aaron Judge to tie Game 3 of the ALDS against the Guardians. All six books suspended the live markets at various points of the weekend.

A way to greatly reduce the complaining about the postseason format: Let the respective No. 1 seeds design their paths. Allow them to choose a bye or not (and ALL would take the bye), and then pick the two other playoff teams to be on their side of the bracket. That would be fun.

“There are instances where we’ll suspend for a minute or two in a key moment, but for the most part our goal is to have the World Series market available around the clock,” Hennessy said. “It’s not an easy job, but we think it goes a long way toward enhancing the customer experience.”

Traders also must contend with busy nights in other sports. On Wednesday night when the Padres erased a 4-2 NLCS Game 2 deficit with five runs in the fifth inning, there were also a dozen games on the NBA menu.

“We do have to suspend at times if things are extremely hectic and resources are spread thin elsewhere,” said Sam Garriock, a trading manager at PointsBet. “When you’re bombarded on a 12-game NBA night, that certainly qualifies. But, typically, we can make the requisite adjustments in equity.”

Garriock came to the defense of his competitors at FanDuel, dismissing the anomaly as simply a “quirk of probability.”

A similar situation ensued in the WNBA Playoffs when the Connecticut Sun had to travel to Dallas to play a decisive Game 3 against the Wings in the WNBA quarterfinals. Ahead of the game, the Sun had better odds, he explained, than the Seattle Storm, which had already advanced to the semis.

On another occasion, the Brooklyn Nets opened last season’s playoffs as an underdog in their series with the Celtics, but had better odds to win the conference title.

Action continues Friday in the MLB Playoffs, as the Phillies host Game 3 of the NLCS on Friday night in Philadelphia. FanDuel projects a close series, with both teams at -110 (as of Friday afternoon) to win the NL pennant.

On the World Series market, the Astros are the definitive favorite to win it all at -125, followed by the Padres and Phillies, who both have odds of +370. The Yankees, who trail the Astros 2-0 in the ALCS, trail the field at +800.

Mike Seely contributed to this story