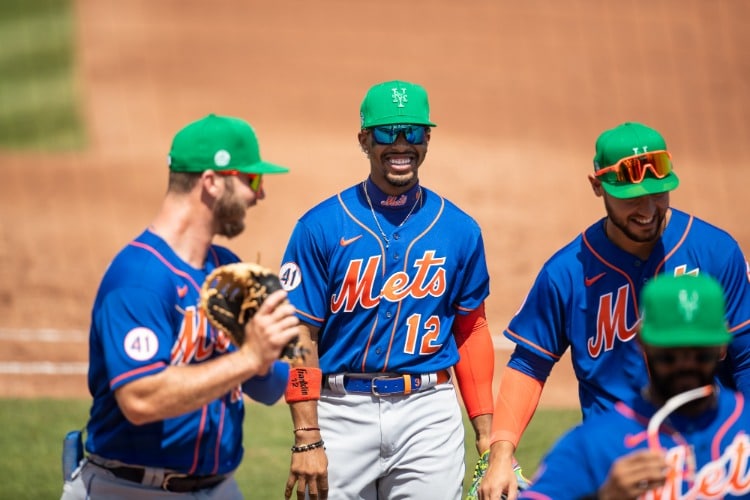 March Madness is marching on, so of course, let’s talk … baseball.

Specifically, let’s talk about betting on some win totals this year, which, at first glance, are looking a little fugazi.

For instance, take a gander over at DraftKings, where no fewer than 14 teams are on the board for between 80.5-90 wins. Now granted, this is an “out of thin air” data set, but it is interesting to note that in the last full season of Major League Baseball in 2019, only six teams fell in that range. In 2018, it was eight. In 2017, there were six (and three right on the 80 number).

The rest of the win totals over on DraftKings? There are 11 under 80 and five over 90. Map this out on a graph, and it would appear that baseball is looking a little top heavy this year, with no fewer than 19 teams having win totals at or above .500.

Again: There isn’t much science happening here — these are random win totals being thrown out at you. But nonetheless, sharp baseball minds are probably seeing some value here, especially on the unders.

“A lot of teams below 65, but yeah, we’re heavy at the top and a lot in the middle,” said Johnny Avello, the director of race and sportsbook operations at DraftKings.

He didn’t seem terribly concerned about it, for the record.

“There’s a few teams way down there,” he said. “Tigers at 68, Rangers at 68, the Pirates all the way down at 58, Colorado has fallen way off, Baltimore hasn’t improved.”

So is it possible the standings at the end of the year prove this out, that the bottom of the barrel is barren enough to warrant 63% of baseball teams ending up with a .500 or better record? Again, of course it’s possible, but is there anyone out there who would take the over on that at even odds? Doubt it.

Analytics having the same issue

Sportsbooks aren’t the only ones facing this top-heavy predicament; according to a recent article over at fivethirtyeight.com, prediction models are seeing plenty of teams fall into that over-80 win range.

In fact, putting together the expected win totals from a trio of prognosticating websites — claydavenport.com, Baseball Prospectus, and Fangraphs — the same issue crops up: A lot of action in that 80-to-90-win range. Gets even tighter in the 80-85 win range.

The best-guess reason for this anomaly from the brain trust at fivethirtyeight.com? Due to the shortened 60-game season from 2020, getting a handle on individual players — never mind teams — isn’t as “easy” as in past years.

So while trying to suss out which win totals are a tick too high should keep everyone busy for the next few hours, there’s another issue that may crop up once the umps yell “play ball.”

In short: Are you ready for some pitching duels?

After a few years of watching the ball leave the yard time and again — in 2019, there were 1.39 home runs a game, the most ever — the league’s minders have decided to deaden the ball for the 2021 season.

According to an Associated Press report, balls hit over 375 feet will lose anywhere from one to two feet on the fly. Not a huge difference, but certainly noteworthy. Additionally, there will be 10 teams — up from five — using humidors this season. The sci-guys say the drier the ball, the farther it will soar, and the humidors keep the balls from drying out. The AP report does not mention who the five new humidor teams are, but the teams already using humidors are the New York Mets, Colorado Rockies, Arizona Diamondbacks, Boston Red Sox, and Seattle Mariners.

In short: Much like win totals, there may be plenty of value in betting the under on run totals early in the season.

“They’re not supposed to play around with these balls,” he said. “Don’t liven, don’t deaden. But yeah, we’ll keep a close eye on it. If we don’t see a lot of scoring early, we’ll probably bring the totals down. But to start? I would think the run totals will be similar to what we’ve seen the last few years.”

Of course, none of the above should be taken as advice of any sort, as Murphy’s Law being what it is, every team will finish with an 81-81 record and hit 982 home runs, but … well, but it’s almost baseball season and this stuff sure is fun to ponder again, isn’t it?