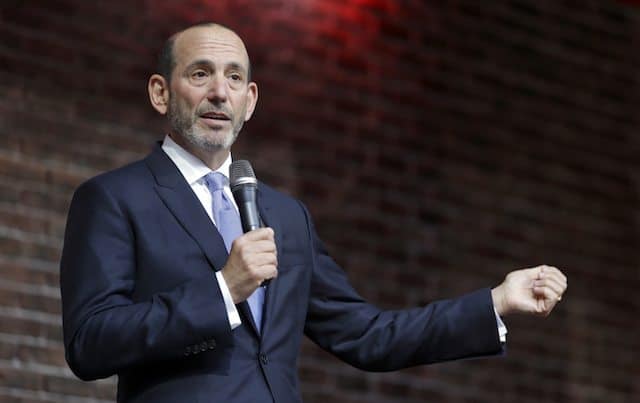 Major League Soccer (MLS) commissioner Don Garber had previously expressed a desire in March 2017 to “understand” what sports betting might look like in the United States and it appears now that he is ready to fully embrace betting on MLS games.

As reported by Yahoo!’s Daniel Roberts recently, Garber, speaking Yahoo Finance’s All Markets Summit, said he thinks that the MLS may actually lead the charge in favor of legal, regulated sports betting.

Currently sports betting is illegal in the U.S. outside Nevada (with a limited exception in Delaware, Montana and Oregon), a prohibition created by the 1992 federal law known as PASPA. The law actually enables the NCAA and major pro sports leagues to seek injunctions to block state efforts to legalize, such as New Jersey’s. But in the past few years, leagues and their commissioners, namely Adam Silver of the NBA, have softened on their . Garber said at the Summit:

“One of the only values of being the youngest major league here, and sometimes being under the radar… is I think it gives us the opportunity to push the envelope on a number of different things,” Garber said. “I do believe that we could lead this effort, because I don’t know that everybody will see soccer as having the same challenges that perhaps would exist if the NFL was going to come out in support of it.”

The state is embroiled in a years-long fight over PASPA, specifically over the law’s constitutionality. The essence of New Jersey’s argument is that it tramples state’s rights. Oral arguments in the case will take place on December 4. But regardless of the high court’s decision, expected in the spring of 2018, it appears that Garber and the MLS may attempt to work with Congress to figure out a solution. Why? Because sports betting and soccer are viewed as genetic partners.

Garber elaborated on his position at the Summit:

“Gambling on games, betting on games, is part of the DNA of football around the world. Go to a game in Chelsea or in Stamford Bridge, somebody’s coming to your seat or in your box with a tout sheet, and you can place a bet,” Garber said. “I am a big proponent that it’s going to happen, we might as well be in front of it. I think there are great values to our tax revenues to be able to do that, I don’t think we can stop it, so maybe we’d even lead the charge.”

While the NCAA, NFL, MLB, NBA and NHL are parties to the Supreme Court litigation, MLS is not. It’s no coincidence that the soccer and basketball commissioners are more openly in favor of sports betting. Both games are played and wagered on internationally, particularly in England where the English Premier League plays very heavily-bet games. The NBA showcases players from roughly 65 countries around the world, many from jurisdictions where sports betting is legal.

Irrespective of the Supreme Court’s decision, we may see a push for a legislative solution. In fact such discussions are already taking place with respect to specific legislation such as New Jersey representative Frank Pallone’s GAME Act, while other Congressman seeking hearings on the matter even prior to the high court’s decision.

“I’ll join the chorus of saying it’s time to bring it out of the dark ages” Garber said in April. “We’re doing what we can to figure out how to manage that effectively.”