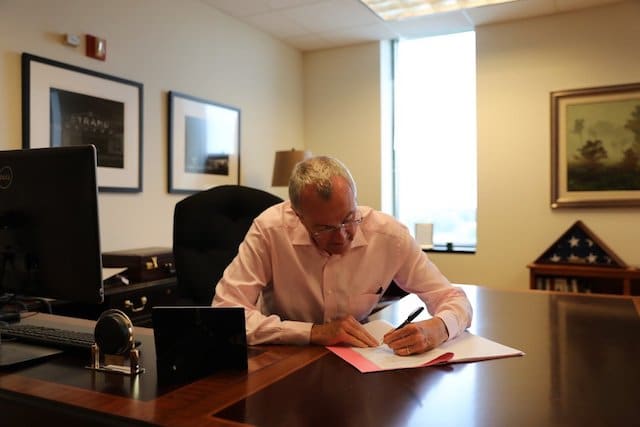 New Jersey Governor Phil Murphy on Monday signed sports betting into law in the Garden State. The bill to make NJ sports betting legal has been on the governor’s desk since Thursday, when both the state Assembly and Senate unanimously passed the bill.

“Today, we’re finally making the dream of legalized sports betting a reality for New Jersey,” Murphy said in a statement. “I’m thrilled to sign Assembly Bill 4111 because it means that our casinos in Atlantic City and our racetracks throughout our state can attract new business and new fans, boosting their own long-term financial prospects. This is the right move for New Jersey and it will strengthen our economy.”

Monmouth Park is planning to begin accepting sports wagers on Thursday morning and according to the statement, licensed casinos and racetracks can apply for licensure to offer internet/mobile sports betting 30 days after the law takes effect. New Jersey will have an 8.5 percent tax on casino wagers, 9.75 percent at racetracks (the additional 1.25 percent is for marketing Atlantic City destinations) and 13 percent for internet sports betting.

The new law does not include a “integrity” or “royalty” fee that the professional sports leagues have been lobbying for. This is no surprise as the pro leagues have been fighting New Jersey in court for nearly a decade over New Jersey’s desire to legalize sports betting. And last week, when the state legislature passed sports betting bills, lawmakers showed no interest in listening to additional lobbying from the pro leagues. To date, no state that has legalized sports betting pays the leagues a fee, although New York may become the first.

Nevada never has and new laws in Pennsylvania and West Virginia don’t have one. Delaware, which became the first state since the Supreme Court struck down the Professional and Amateur Sports Protection Act in May, to offer legal sports betting on June 8 isn’t paying one.

Word of the signing came on early afternoon on Monday, as Twitter began spreading the news.

Two sources have confirmed that @GovMurphy is going to sign the #SportsBetting bill this afternoon.

According to multiple outlets, Monmouth Park, which led the charge to make NJ sports betting legal, will accept its first bets at 10:30 a.m. on Thursday and Murphy may or may not be the first person to place New Jersey’s first legal sports bet at the famed racetrack.

Conflicting reports have Senator Ray Lesniak, who has been championing the sports betting campaign in the Garden State for years, and Murphy as the first to place bets. Others have chimed in with further details on how things will unfold.

Betting will begin at @MonmouthPark at 10:30 a.m., Thursday. Sen. Ray Lesniak (@lesniakinstitut) will be making the first bet, "$50 on France to World Cup. That's big-time for me."

Statement from Dennis Drazin says @GovMurphy will be at the track on Thursday to place the first bet:

"I look forward to the Governor joining us at Monmouth Park Racetrack on Thursday morning to usher in a new era for New Jersey by placing the first bet."

per queries: Meadowlands & Freehold plan to offer sports betting in time for football season. multiple AC casinos likely to have sports books by July 1. no NBA betting at Golden Nugget, though. no betting on NJ college teams

more A's to Q's: NJ tracks & casinos will offer same betting Las Vegas does – single-game, futures, etc. even PGA Tour, MMA, Euro soccer, etc. also, OTWs are NJ's off-track wagering sites for horse betting. not in the new sports betting law, though they might get in on 2nd wave

As for the rules and regulations, the statement says: “The bill authorizes the Division of Gaming Enforcement and the New Jersey Racing Commission to issue emergency regulations for a period of up to 270 days to govern sports betting. These regulations are to allow for already-licensed casinos and racetracks to apply for a transactional waiver that will enable them to commence sports betting.”

And the New Jersey Racing Commission will meet Wednesday to hammer out a regulatory structure for sports betting at racetracks. After the commission accepts the regulations, Murphy will ratify the decision and licensed racetracks can apply for a temporary waiver to begin accepting sports bets.

At long last, they’ll be off on Thursday, with Lesniak’s $50 riding on … France!