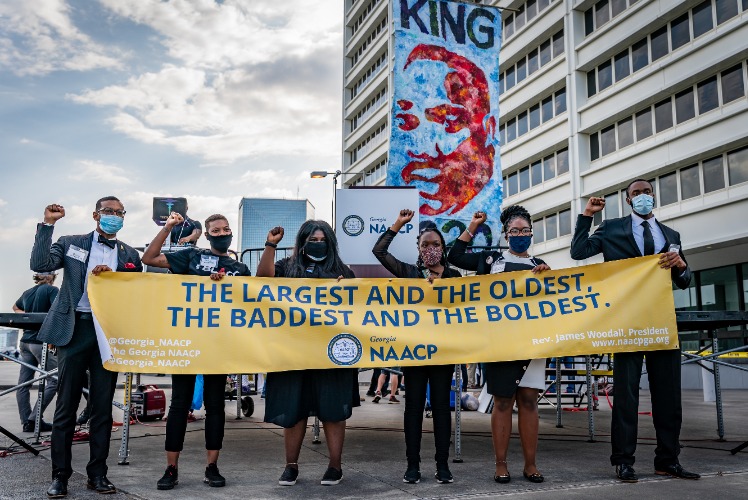 The issue of legalized sports betting in California is already tied to the state’s homelessness issues, and on Monday morning, it also became tied to civil rights.

“As the nation’s largest and most revered civil rights organization, the NAACP has long been a steadfast ally in the fight for justice, self-sufficiency, and sovereignty for Indigenous people,” NCAAP President Rick L. Callender said in a press release in support of the Tribal Sports Wagering Act. “For far too long have the tribes been excluded from the table of creating economic self-sufficiency. The California-Hawaii NAACP has stood with California Indian tribes in their fight to establish and protect gaming on their own tribal lands.”

The NAACP wrote in the release sent out by the tribal-backed Coalition for Safe, Responsible Gaming that it will support the tribal initiative and oppose a second one put forth by a group of seven sports and sports betting companies.

The Tribal Sports Wagering Act, which has already qualified for the November 2022 ballot, would allow for an expansion of gaming that includes the addition of sports betting and ball and dice games at tribal retail casinos. The state also has some card rooms that offer a limited number of casino-style games, but they are not included in either proposal and the tribes have long been at odds with the card rooms, which they contend operate illegally.

Two measures could be approved

The tribes were trying to qualify their proposal for the 2020 ballot before COVID-19 slowed down the signature-gathering process. It is one of four proposals that have been floated in the state. It’s likely there will be two initiatives on the ballot, the tribes’ offering and the California Solutions to Homelessness and Mental Health Support Act, which is being put forth by a group of six national sports betting and gaming operators and the company Fanatics. The latter ballot initiative, which is in the signature-gathering stage, would allow for statewide digital wagering and would require that operators be tethered to tribal casinos. Voters could approve both measures.

INTERACTIVE FEEDBACK: California voters are open to the idea of creating a legal market for betting on college and professional sports, according to a poll released last month. (1/4)

Bally’s, BetMGM, DraftKings, Fanatics, FanDuel, Penn National/Barstool Sportsbook, and WynnBET have all signed on to back the initiative and so far have put up $100 million to fund the effort. BetMGM, DraftKings, and FanDuel are the primary drivers. The operators, who weren’t aware of the NAACP announcement as of Monday, offered no reaction to it.

Callendar said the NAACP group “has grave concerns about the impacts that a massive expansion of online and mobile gambling would have on problem gambling in California — particularly among youth and communities of color. Additionally, not one penny raised from this effort has been dedicated towards direct reparations, or educational support, for African Americans and other people of color — which is why we unanimously voted to oppose the Corporate Online Gambling Proposition.”

Where tax dollars would go

According to the operators’ proposal, 85% of all tax dollars generated, which figure to be in the hundreds of millions annually, would be directed to fund programs to combat homelessness and mental illness in the state. The tribal initiative, which would also allow for in-person wagering at four horse tracks, would tax revenue generated from the tracks at 10% and those tax dollars would be earmarked for problem and responsible gaming programs, enforcement, and the general fund. The proposal does not break down exactly where revenue generated by the tribes would go.

Proponents of the card-room initiative do not appear to be collecting signatures, so that proposal is likely irrelevant, while sources say the tribal-backed digital proposal may not collect enough signatures. Representatives with the operator-backed initiative have previously said they expect to have enough signatures to qualify for the ballot by the June deadline.