The future of sports betting in the U.S. is likely to be directly related to Native American gaming interests because of their prominence nationally and because of their significant tax payments to state governments in heavily populated states.

Among those are California, Florida and New York.

Sports betting at tribal gambling operations is comprised of many layers and of vital importance to all Native Americans, not just those involved in the gaming industry. The issue of tribal sovereignty is among them.

Tribal sovereignty is the right of Native Americans to make their own decisions related to self-government on federally recognized tribal lands. It’s not hard to realize why sovereignty, often called “self-determination,” is key point in any discussion of tribal gaming and federal government oversight of Indian affairs.

In the words of Dr. David RM Beck, a professor of Native American Studies at the University of Montana, the Federal treatment of Native Americans over hundred of years has created a “historical trauma” that is likely to remain forever — a wound that cannot heal.

It’s in this context that Federal legislation in the form of The Indian Gaming Regulatory Act (IGRA) was passed in 1988. Indian gaming began because the IGRA includes this key element:

The defense of sovereignty requires each Native American operation to staunchly and passionately defend its place in the gambling marketplace — either alone or in conjunction with other tribes.

The view from Washington state 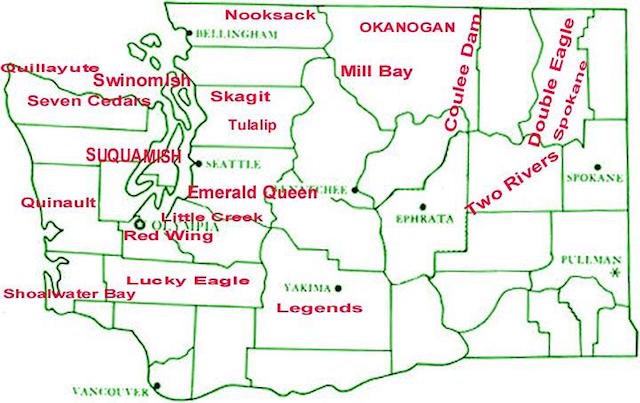 On a state level, in Minnesota, sports betting legislation is planned for introduction, but no Indian gambling operation has, as yet, moved to support it. The Minnesota Indian Gaming Association continues to oppose the expansion of off-reservation gambling, including the legalization of sports betting. The pattern of sports betting legislative trial balloons launching on a state-by-state basis including Washington, Arizona and others continues. It’s clear tribal operations will have their say.

Washington is home to the fourth largest number of Native American casinos (25) in the US — after Oklahoma, California, and Minnesota.

Allen serves as CEO of JKT Gaming overseeing the 7 Cedars Casino, Golf Course and Resort near Sequim, Washington, about 80 miles and a two-hour drive from Seattle. He tells Sports Handle the complexity of the issue of sports wagering is apparent because each state has its own contracts, traditionally called “compacts” with various tribal operations. He points out that some of these compacts have a lack of specificity when it comes to sports betting, causing a delay in offering it to a customer base that clearly wants it.

Allen says technology advances since the late 1990s in the form of electronic gaming have helped the 29 tribes operating 25 casinos in Washington become a $2 billion a year business. “However, there are economic differences between the tribal casinos on the I-5 corridor near Seattle and Portland, Ore. and the smaller tribes, such as ours on the Olympic Peninsula.”

No consensus at all

It’s Allen’s view that “there’s not a consensus at all” in dealing with allowing sport betting among tribal operations. “It has to do with compacts and politics.” He notes the vast number of tribes in California, for instance, have finally gotten together to file suit contending the state is illegally allowing commercial card rooms to encroach on tribal compacts. “But, it took time for the tribes to get together on this and other issues,” he said.

“In Washington we only have 29 tribes, but some of tribes are more conservative than others. It makes no sense to offer up a bill that doesn’t make sports betting accessible to everyone through mobile betting. It’s clear the public doesn’t want to get out of their own living rooms every time they make a bet.”

Yet, there’s no agreement on this, according to Allen.

Allen is not bullish on a recently filed bill that would allow sports betting in Washington because it would not permit mobile sports betting beyond casino premises.

Sizing up the competition

Another issue is “who is your competition?” He points out that some states have significant commercial competitors, like in Michigan, Florida and New York, while others have none such as Connecticut. “Here in Washington we have little mini-casinos with low betting limits with some table games and no slot machines. They are unlikely to be able to offer sports betting at any point.”

“Our path to offer sports betting is through a compact amendment which is exactly what we did with electronic gaming. However, I believe a lottery solution is best for the state. I don’t like the idea of a different set of betting lines across the state.”

He continued, “Unfortunately, as opposed to Oregon, the Washington State Lottery is a very conservative group under new leadership. So far they’ve shown no passion for getting into the legalized sports betting space. It’s likely the state will want something out of sports betting and the lottery may be the best way to get it.”

Allen says tribal casinos know there’s not a lot of money to be made in sports betting, but added, “We want the traffic is generates. The Nevada and New Jersey sports betting model still works, but at some time you have to drive people into your brick and mortars. Making sports betting too easy by putting it in convenience stores and the like, as Oregon wants to do, and put into the same kiosks with their daily keno game creates a different problem.

“You have to strike a balance between responsible gambling and proper access,” Allen said.

He noted that in Washington when off-track horse betting was legalized, county population dictated the number of outlets. Not everyone could get it and that seems to work. Allen feels this is the same model the lottery should adopt, if they do it right.

“The tribes would love to have a monopoly as we have with electronic games, but I just don’t see the state letting that happen,” he added.

The tribes want to protect the brick and mortars but have to understand sports bettors are not slot players, according to Allen.

Allen has long been an observer of tribal gaming in California and other regions, where electronic gaming revenue is shared with the state as opposed to Washington where it isn’t. He says compacts are likely to be in need of renegotiation, especially if California horse racing tracks wants to offer sports betting. “When the tribes have a major revenue sharing agreement with the state, they will help drive the decision on sports betting.”

“California tribes are polarized,” Allen said, and on many issues the state is likely to be “slow to the (sports betting) market.” The smaller the number of tribes, the more quickly sports betting will be offered, Allen said. He cites Oklahoma with more than 30 tribes with scores of gaming operations as likely being unable to quickly offer legal sports betting. He notes that Oregon with less than 10 tribes may be able to move forward more quickly.