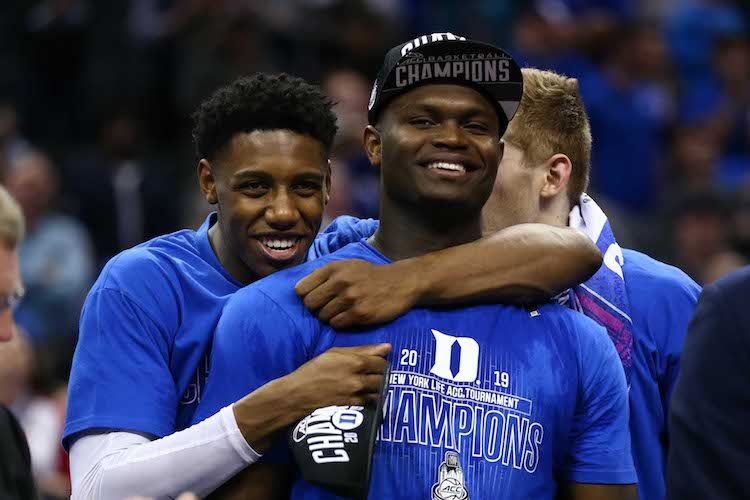 Duke product Zion Williamson enters the NBA with as much fanfare as any prospect over the last two decades not named LeBron or Yao.

Described by many as a more chiseled version of Charles Barkley, Williamson set a record with a 45-inch vertical leap at the Blue Devils’ summer combine testing program last July. For a 285-pound swingman built more like a defensive end than a small forward, Williamson’s unique skillset has NBA scouts salivating.

On Thursday night, Williamson is a virtual lock to be taken by the New Orleans Pelicans with the top overall pick in the 2019 NBA Draft. At PointsBet Sportsbook, Williamson is an overwhelming -10000 favorite to be selected with the No. 1 pick. There should be little suspense over the next two selections, as Murray State guard Ja Morant and Duke forward R.J. Barrett are both expected to be taken in the Top 3, with the Memphis Grizzlies and New York Knicks set to make selections in that order.

From there, even the most seasoned Draft prognosticator is unsure what will happen next. The Pelicans, which acquired the No. 4 pick from the Lakers in a blockbuster trade on June 15 that sent Anthony Davis to Hollywood, could look to move the pick for an established veteran or add another young star to build their roster around Williamson. The Pelicans’ decision could determine a number of props offered on Draft Night.

One prop drawing interest at Caesars Entertainment is on whether Vanderbilt guard Darius Garland will be taken in the fourth slot (Yes: -200, No: +170). The Bulls could be a potential landing spot for Garland, especially if general manager Gar Forman can pull off a trade with New Orleans. With multiple picks in the first round, the Hawks may also look to move up on Thursday evening. Atlanta has offered New Orleans the No. 8 and No. 10 picks in exchange for the fourth spot, ESPN reported.

Interest in Garland will likely impact props involving two others prospects that could be taken early in the opening round: Virginia forward DeAndre Hunter and Texas Tech forward Jarrett Culver. In April’s national championship game, Hunter hit a game-tying 3-pointer in regulation before the Cavaliers rallied to defeat the Red Raiders in overtime. Culver has odds of -200 to be taken in the Top 5 (No: +170), while Hunter has a better chance of slipping below the fifth position, according to Caesars.

Will the ACC dominate the Lottery?

At a minimum, the conference should have at least two picks in the Top 5 in Williamson and Barrett, plus a possible third in Hunter. Another prop at PointsBet gives bettors the chance to predict how many ACC players will be selected in the Top 10.

The outcome of numerous props could hinge on where Duke forward Cam Reddish is selected. Mock Drafts from ESPN and NBA Draft.net project the Hawks to select Reddish at No. 10. The Hawks are also projected to take Reddish in NBA TV’s Mock Draft, but two spots earlier at No. 8.  Reddish, a 6-8 forward, averaged 13.5 points and 3.7 rebounds per game in his freshman season at Duke.

For those who believe that Duke will land three players in the Top 10, a prop at PointsBet on the Over (2.5 Blue Devils) has considerable juice at -589. Alternatively, the Under of 2.5 will pay bettors $400 on a $100 wager.  PointsBet has also set the total of number of Duke players in the Top 5 at 2.5. Since Reddish has slid down Draft boards over the last few months, the under (-1250) appears to be the right side. On the eve of the Draft, the over rose to as high as +700.

At FanDuel Sportsbook, a prop on Reddish going eighth or later dropped from -121 to-158 on June 17.

The NBA Draft is this Thursday night, and we've got a number of fun prop bets to bet on for the big night. @TheDuelSports breaks them down ⤵️https://t.co/4gamq0SdX5

PointsBet set the total for Top 10 selections from the ACC at 4.5. The over is listed at -715, while the under has odds of +450. Last year six ACC players were taken in the first round, including two in the Top 10.

Also, keep an eye on another proposition bet that involves Williamson. Do you think that as many as six freshmen could be taken over the first 10 picks on Thursday? PointsBet set odds of-304 for the Over (5.5) and odds of +225 for the under. Texas freshman center Jaxson Hayes could settle the wager. Both NBADraft.net and NBA TV project the Hawks to select Hayes with one of their Top 10 picks.

For Kentucky fans, Caesars offers a prop on the sum of Wildcats’ players taken in the first round by draft position. Caesars set the total there at 48.5. The outcome may not be determined until late in the first round. Three Wildcats’ players — P.J. Washington (No. 13 Miami), Keldon Johnson (No. 15 Detroit) and Tyler Herro (No. 17 Indiana) could be taken in a span of four picks, according to NBA TV. If that’s the case, the under will come in barely.

Though the opening round is not expected to have a strong international presence, two prospects stand out. Sekou Doumbouya, a 6-9 forward from France, has been linked to the Wizards at No. 9 in some Mock Drafts. Doumbouya is listed at -130 at Caesars to be taken in the Top 10 and at Even to be selected tenth or lower. PointsBet also has a prop on Goga Bitadze, a 6-11 center from the Republic of Georgia. Consider the Under of 17.5 on Bitadze’s draft position at -110.

Rookie of the Year

Williamson has also emerged as a heavy favorite at Caesars to win NBA Rookie of the Year (-450). Morant and Barrett are the co-second choice at +450.

In recent years, former top overall picks Blake Griffin, Kyrie Irving, Andrew Wiggins, Karl Anthony-Towns and Ben Simmons are among a list of players who have also won the Rookie of the Year award. Bucks guard Malcolm Brogdon, the No. 36 overall pick in the 2016 NBA Draft, received the honor for the 2016-2017 regular season.