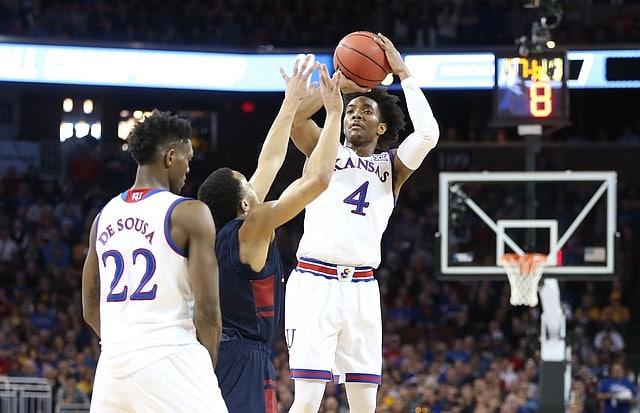 We are going to just cut to the chase here: On Saturday in the second round of the NCAA Tournament, place all your bets against the Pac-12 contingent. Wait … what? Ah, the “Conference of Champions” had a flame out for the ages with Arizona State — which should have never gotten a bid — and UCLA losing in the First Four and popular Final Four pick and No. 4 seed Arizona getting blasted by MAC school Buffalo in the biggest shocker so far. I wonder how Arizona officials feel now after backing Sean Miller!? No way he can stay as coach after that pathetic effort.

Since the formation of the Big 12 in 1996-97, none of the six major conferences (includes Big East in basketball) had failed to send a team to the round of 32. It’s the first time since 1986 that the Pac-12 will not pick up a single win in the Big Dance. And it comes on the heels of the conference being left out of the College Football Playoff. You might want to get your resume ready, Larry Scott (Pac-12 commissioner).

The Pac-12 was just taken out by New York State.

Midwest Region game tips at 7:10 p.m. ET from Wichita. I’ll just flat-out say that I think Kansas is vastly overrated – the second-worst No. 1 seed behind Xavier. The Jayhawks do have a superstar in senior guard Devonte’ Graham — How does KU always find these senior guards who suddenly are great? It was Frank Mason last year. — but not much else. Graham basically has to play 40 minutes a night because Coach Bill Self knows his team will be vastly outscored whenever the Big 12 Player of the Year is sitting.

KU was 13.5-point favorite in Round 1 against No. 1 Penn and did cover in a 76-60 win, but that was rather misleading. The Ivy League champion Quakers cover that spread and make it very interesting if they don’t go 5-for-14 from the charity stripe. Graham was spectacular with 29 points, six rebounds and six assists in 39 minutes. Penn had no one to match up with him, but Seton Hall does.

The Pirates were -3 against NC State on Thursday and won 94-83. Khadeen Carrington, their version of Graham, had 26 points, four rebounds and three assists. Carrington could almost equal Graham out, and I like Seton Hall’s frontcourt of Desi Rodriguez and Angel Delgado against KU’s front line – especially with Jayhawks star center Udoka Azubuike (sprained MCL) clearly not 100 percent. He missed the Big 12 Tournament due to injury and logged only three minutes vs. Penn. As it was, KU struggled to rebound the ball this season. Seton Hall was Top 50 nationally.

An upset here would not surprise me. Seton Hall, which has covered six straight games, is seeking its fifth Sweet 16 appearance and first since 2000. The Pirates are 0-4 all-time against No. 1 seeds. I’m not going to call the outright upset simply because it’s essentially a home game for KU, but I’m taking the points (might buy a couple).

❄️ IN HIS VEINS! #MarchMadness pic.twitter.com/Lyyx3ZY9NV

West Region game at 7:45 p.m. ET from Boise – so the Zags will have a huge fan advantage with campus a reasonable drive or short flight away (about 420 miles). Neither team looked great in Round 1. Gonzaga, my pick to come out of the West, escaped UNC Greensboro 68-64 to win its 15th straight game but failed to come close to covering the 12.5-point number – the Zags have covered only five times in that 15-game stretch, but they were often overvalued against West Coast Conference teams.

[Check out the sports betting homepage for news, stories and betting business]

Don’t let a close call in the early rounds force you to jump off a team’s Final Four bandwagon. Last year, North Carolina absolutely should have lost in the Round of 32 against Arkansas but staged a late rally. Gonzaga also was pushed to the limit in Round 2 by Northwestern.

This year’s Zags are one of the nation’s best offensive teams and won’t shoot 5-for-23 from long range or miss 12 of 25 free throws again. Killian Tillie is arguably the team’s second-best player and was an ugly 1-for-6 vs. UNC-Greensboro for two points.

Ohio State was -8.5 against No. 15 South Dakota State and won 81-73. That game was tied with 1:40 left. OSU was way too 3-point happy, going 12-for-40. The Buckeyes ranked 287th nationally during the season in 3-point attempts at 19 per. That could have been a terrible beat for SDSU backers as the Jackrabbits opted not to foul after a missed 3-pointer with 14 seconds to go. Had they, one has to assume OSU at least makes one free throw to push the margin of victory to nine.

This is the only rematch of a regular-season game thus far in the Big Dance. On Nov. 24 in the Phil Knight Invitational in Portland, Gonzaga (in basically a home game), trashed the Buckeyes 86-59. OSU shot just 34.5 percent to Gonzaga’s 58.5. The Zags’ size and physicality dominated.

The Buckeyes might have the best player on the floor Saturday in Big Ten Player of the Year Keita Bates-Diop (he had only seven points in the first meeting), but Gonzaga will have the next best 3-4 and is much deeper overall. Yeah, OSU coach Chris Holtmann will use the whole “payback” motivation and this obviously won’t be a 27-point blowout again but the Zags win. Since 2013, Gonzaga is 34-2 as a neutral-court favorite. It is 6-0-2 ATS on a neutral court as a favorite of 4 points or fewer.