NCAA Tournament Favorites Missing From The Madness In Illinois & Virginia

by Matt Schmitto
in Sports 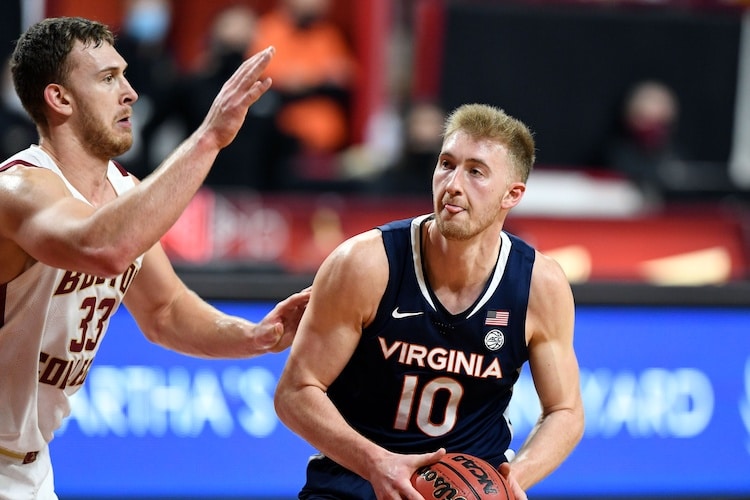 March will be the biggest sports betting month yet thanks to an influx of new bettors who for the first time can place wagers on the NCAA Tournament. Unfortunately for college basketball bettors in Illinois and Virginia, two of the most recent states to join the legal U.S. sports betting scene, they won’t be able to wager on some of their favorite teams. And no, it’s not because the schools they represent will be absent from the dance.

In fact, even though seeding is not determined until Selection Sunday, both states have teams locked to play in the tournament.

The Illinois Fighting Illini, currently 10/1 to win the NCAA Tournament, have a great chance to lock up a one-seed. Meanwhile, Virginia isn’t as dominant as the last time it played an NCAA Tournament game, but the Cavaliers are 25-1 to defend their 2019 NCAA title. (Of course, Virginia’s appearance is now threatened by a positive COVID-19 test announced on Friday, which resulted in the cancellation of the team’s semifinal game against Georgia Tech.)

That aside, if you’re in Illinois looking for March Madness odds on the Illini, or likewise in Virginia looking for UVA’s odds, you may notice a team or two missing.

Illini, UVA missing from the madness

“Futures odds for the Illini is one of the most popular requests we get from customers in Illinois,” said Andrew Mannino, a senior analyst at PointsBet.

Legislatures in Illinois and Virginia both passed bills that prohibit betting on in-state schools, bringing the number of states with some sort of prohibition on college sports betting up to a dozen. Now those states have two of the top-ranked basketball schools in the country, plus a couple of hopeful Cinderellas.

The demand in Illinois increased as the Fighting Illini men’s basketball team’s season progressed. Despite starting out ranked in the top 10, the Illini opened with 60/1 odds at PointsBet — which were available in Indiana, Iowa, and New Jersey.

Since then the Illini have climbed up odds sheets while others, including Big Ten rival Michigan State, have fallen. Now, after winning 11 of their last 12 games en route to a No. 2 seed in the Big Ten tournament, the Illini are ranked No. 3 as they try to make a final push for a one-seed in the NCAA Tournament.

The Illini aren’t the only in-state team giving Illinoisians a severe case of FOMO. So too are the Loyola-Chicago Ramblers, who have punched their ticket to the big dance three years after their historic underdog journey to the Final Four.

The process sportsbooks use to omit these teams is relatively simple. When legislation prohibits such bets, “blockers” coupled with geolocation tools, which track where bets are placed, black out schools within the stated jurisdiction.

Sorry, Sister Jean, but you’ll have to make a trip to Indiana if you want a 55/1 ticket on the Ramblers.

FanDuel Sportsbook oddsmaker John Sheeran said, “It’s more of a pain point, but the vast majority of bettors are going to find a different team to wager on.”

Similarly, according to Mannino, PointsBet has seen more bets on the Iowa Hawkeyes in its Illinois market.

So what happens to those futures bets if the Ramblers, or more plausibly, the Fighting Illini, play on the final Monday and ultimately win the national championship?

“As we say on the other side of the counter, ‘If you can’t win, you can’t lose,'” Sheeran explained.

Or more formally, something you might read in fine print: Bets are voided if an unlisted team wins.

Of course, it goes without saying that prohibitions such as these help keep unregulated actors in demand rather than integrity in check. That’s because bettors will find an alternative way to bet on their favorite schools, either offshore or with the local bookie down the street — which is something to consider for the next state that passes sports betting legislation.

After all, bettors bet.

Matt Schmitto is the sports betting editor for RotoGrinders. He grew up in Texas, graduating from Texas Tech University. After a short stint in law school, Schmitto joined RotoGrinders as a staff writer in 2019 and has contributed to Sports Handle and other sites in the US Bets network.