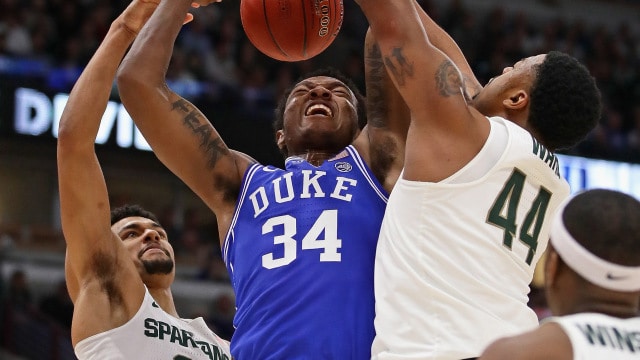 In our NCAA Tournament region overviews, we like No. 4 Gonzaga in the West, No. 4 Arizona in the South, No. 1 Villanova in the East and …. No. 3 Michigan State in the Midwest, which is very top-heavy but not necessarily that deep. I rank it the second-toughest behind the South.

While Big 12 regular-season and tournament champion Kansas is the top seed – and gets to play the first two rounds in nearby Wichita and the second two rounds in nearby Omaha – it’s No. 2 Duke that is the +200 Midwest favorite. No team has more pure talent and future NBA players than Duke, led by ACC Player and Freshman of the Year Marvin Bagley III. 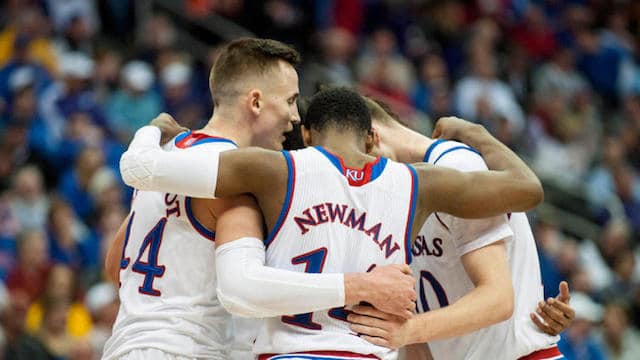 Offense has never been a problem with the Blue Devils – defense has. But that all changed when Mike Krzyzewski shifted to a zone. Over its past nine games, Duke has allowed 90.3 points per 100 possessions, the fifth-best defensive efficiency in the country. In that span, Duke has played zone defense 93 percent of the time.

It should also be noted that Duke has the highest KenPom national rating at No. 3. It is third offensively as well and seventh on defense. In the past 10 NCAA Tournaments, only four teams (10 percent) that went into the tourney ranked outside the Top 20 in KenPom advanced to the Final Four.

The Big Ten has not won a national championship since Michigan State won in 2000, and the third-seeded Spartans are +275 to win the Midwest with Kansas. As usual, the Spartans are a terrific defensive team, leading the country in block percentage (18.8) and 2-point field goal percentage defense (38.4). What this Michigan State team has that past ones haven’t is NBA lottery talent: both Miles Bridges and freshman Jaren Jackson Jr., the Big Ten Defensive Player of the Year, will be 2018 lottery picks.

Sparty ranks No. 6 overall on KenPom, ninth on offense and ninth on defense. Only Duke and MSU had both units in the Top 10 nationally. Unfortunately, they would play in the Sweet 16 and not the Final Four. With Duke’s 88-81 win over Michigan State at this past November’s Champions Classic, Tom Izzo dropped to 1-11 lifetime against Coach K. But Izzo has his most talented team ever.

As for Kansas, kudos for winning a record 14th straight Big 12 regular-season crown. Amazing, and it breaks a record for consecutive conference titles with UCLA. However, this is just a good team and not one of Bill Self’s best.

One big concern for Kansas is the availability of big man Udoka Azubuike, who led the team in plus/minus during the season but missed the Big 12 Tournament because of a knee injury. He’s likely to play in the Big Dance but won’t be 100 percent. Azubuike has been a dominant force in the paint this season, averaging 13.7 points and 7.1 boards while giving the Jayhawks their only consistent low-post presence. Even with Azubuike, Kansas ranked 290th in offensive rebounding rate allowed. That’s means too many second-chance points. Michigan State will make Kansas pay in the Elite Eight.

There’s a big drop-off to No. 4 Auburn at +900 to win the West. The Tigers are the weakest No. 4 and haven’t been the same since losing forward Anfernee McLemore to a season-ending injury. The sophomore was about the only post presence that Auburn had, averaging 7.7 points, 5.3 rebounds and an SEC-leading 2.7 blocks.

Kansas has an easy path to the Elite Eight but loses there to Sparty. That the Midwest champion wins the NCAA title is +250.