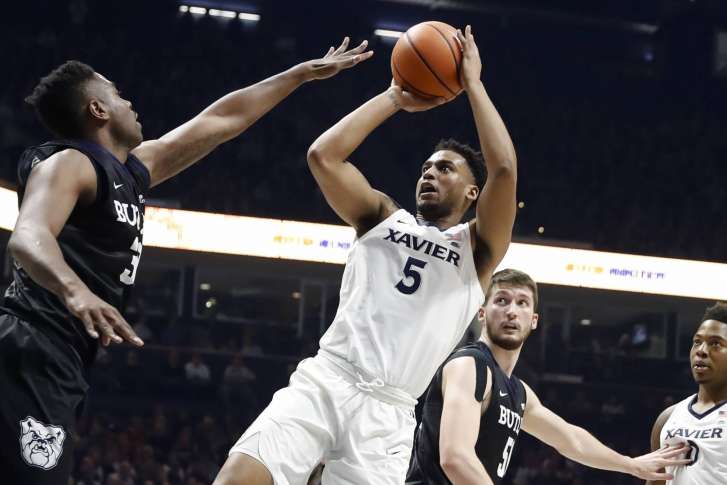 We start our March Madness region previews for  the 2018 NCAA Tournament with what I believe is the weakest region by a substantial amount: the West.

Xavier is the top seed and is a fine team, winning the Big East regular-season title, but pretty clearly the worst of the four No. 1s (Virginia, Kansas & Villanova). The Musketeers lost twice this season to Villanova (in blowout fashion) and to Providence. They were beaten handily at a neutral site by Arizona State. Ken Pomeroy lists Xavier just 14th in his rankings. The other three top seeds in the West alone finished seventh (UNC), eighth (Gonzaga) and 10th (Michigan).

Coach Chris Mack’s team is very good offensively but ranks 99th in KemPom’s defensive efficiency and 311th in the nation in defensive turnover percentage. Star Trevon Bluiett can run hot-and-cold. In the Big East Tournament lost to Providence, he was just 2-for-14 from the field. He was 4-for-13 in an earlier loss to the Friars and 1-for-10 in a close win over Georgetown.

Certainly, Xavier will handle either Texas Southern or UNC Central in the first round, because these days No. 1 seeds generally crush No. 16s. However, either Missouri (+2000) or Florida State (+4000) could give the Musketeers problems in Round 2. The Tigers have a 2018 lottery pick on the roster in Michael Porter Jr., who just returned in the SEC Tournament after missing all but two minutes during the regular season due to back troubles. The Tigers might not get past the Seminoles because starter and second-leading scorer Jordan Barnett is suspended for that game. Barnett averages 13.1 points and 5.9 rebounds per game, both second on the team, and shoots 41.4 percent from 3-point range.

But we’ll put Xavier into the Sweet 16, where it will be knocked out by Gonzaga. If Gonzaga wins its opener, it will face No. 5 Ohio State or No. 12 South Dakota State (which I like to upset OSU because we all know at least one 12 will beat a 5). The Zags trashed the Buckeyes 86-59 in November and opened the 2017 NCAA Tournament with a win over South Dakota State. Familiarity can be a good thing this time of year!

You may also remember the Zags destroyed the Musketeers 83-59 in last year’s Elite Eight. The Bulldogs are the only West Coast team among their fellow West Region contenders, and that can only help for travel purposes. Gonzaga has been a No. 4 seed once, when it went 2-1 in 2009 and lost to eventual national champion North Carolina in the Sweet 16.

The Bulldogs average 84.5 points per game, on pace to be the highest scoring average in school history. Gonzaga is outscoring opponents by 17.4 points per game, the second-highest differential in Division I behind Cincinnati (17.8).

In the bottom half of the bracket, look for North Carolina and Michigan to match up in the Sweet 16. The Wolverines of past under John Beilein were a good 3-point shooting team but had little size and played no defense. Beilein has one of his best defensive teams ever this year, though, as the Wolverines limit opponents to 63 points a game. Still, the Heels are better. 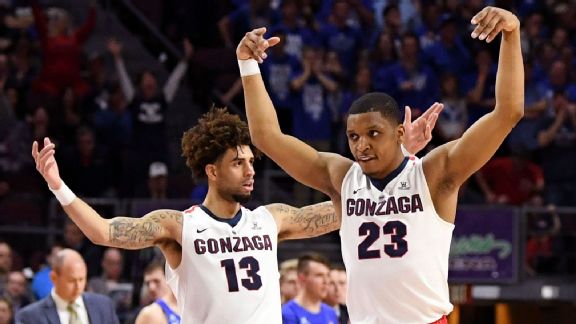 We’ll project a Gonzaga-North Carolina national championship rematch for a trip to San Antonio, with the Zags getting payback. Gonzaga is perhaps the most balanced team in the country, with six players averaging within four points of the team leader (Johnathan Williams). The Zags are the only team in the West Region that has both an offense and defense ranked within the Top 20 by KenPom.

I also like how the locations work out for the Zags as their first two games will be in nearby Boise and then the next two in Los Angeles, where Bulldogs fans should be out in full force. That’s a cross-country flight for Michigan and North Carolina.