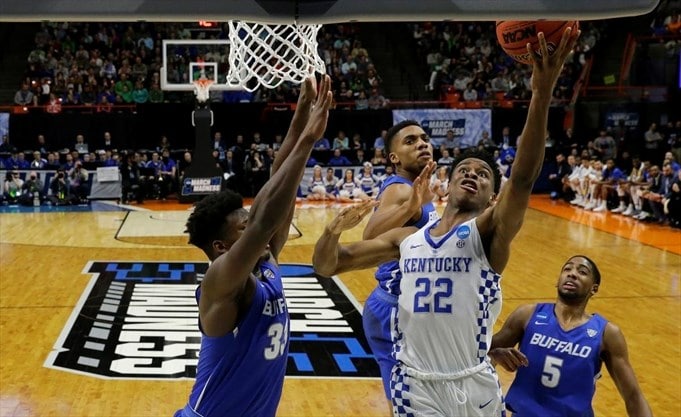 Was that the wildest first two rounds of an NCAA Tournament in history? I believe so, if only because UMBC became the first No. 16 seed to ever beat a No. 1 – not just beating No. 1 overall seed Virginia in the South but trouncing the Cavaliers by 20 points.

Only Kentucky is left standing.

It’s the first time ever a region hasn’t had a top-four seed reach the Sweet 16, and now Coach John Calipari, who originally complained loudly about UK’s draw, appears to have a very easy path to the Final Four . The Cats, who won’t face a seed lower than No. 7 before the national semifinals, are -105 favorites to with the South, and I think they do cruise to San Antonio. My team to come out of the South was Arizona, which absolutely s**t the bed in an embarrassing first-round blowout loss to MAC school Buffalo. Simply no excuse for that effort, and I don’t know how Sean Miller is still the Wildcats’ coach with that face-plant on top of his reported link to recruiting violations.

The South champion faces the West champion in the Alamodome, and my pre-tournament West pick was No. 4 Gonzaga. The Zags haven’t exactly sparkled in close wins over No. 13 UNC Greensboro and No. 5 Ohio State, but they are still standing and that’s all that matters. Gonzaga caught a nice break in Round 2 when West No. 1 Xavier was knocked out by Florida State, which faces the Zags next, and No. 2 North Carolina was shockingly pummeled by Texas A&M. Gonzaga is +140 to win the West, and I’m sticking with them.

In the Midwest, I went with No. 3 Michigan State because these were arguably Tom Izzo’s most talented Spartans with lottery picks in Miles Bridges and Jaren Jackson Jr. Also, Jay Bilas, who might be the smartest man in college basketball, liked Sparty as well. Alas, Izzo had some very questionable coaching decisions on Sunday and the Spartans couldn’t put it in the lake from the end of a pier in an ugly loss to No. 11 Syracuse.

No. 2 Duke is the -140 Midwest favorite and faces the ACC rival Orange in the Sweet 16. No. 1 Kansas is still standing at the top of the bracket and is +175 for the region. It takes on No. 5 Clemson (+800). I like the Blue Devils, who were always the most talented team in the entire field, to reach San Antonio.

Finally, the East is the most chalk region with No. 1 Villanova (-180), No. 2 Purdue (+425), No. 3 Texas Tech (+700) and No. 5 West Virginia (+525) still standing. The Wildcats have barely broken a sweat in their first two games, were my pre-tournament pick in the East and remain so. It’s very helpful they get all week to prepare for that West Virginia press instead of a quick turnaround.

So that’s Kentucky-Gonzaga in one national semifinal and Villanova-Duke in the other. Right now, my final lean would be Duke over Kentucky, but that’s not set in stone. In my daily picks, I’m 3-2 ATS thus far, going 1-2 on last Friday’s games (one loss on the total – and that’s my last total pick as I’m not a huge fan) and 2-0 on Saturday thanks to a very fortunate last-second garbage-time 3-pointer by Seton Hall that allowed the Pirates to cover against Kansas. We’ll be back with Thursday and Friday picks later this week.