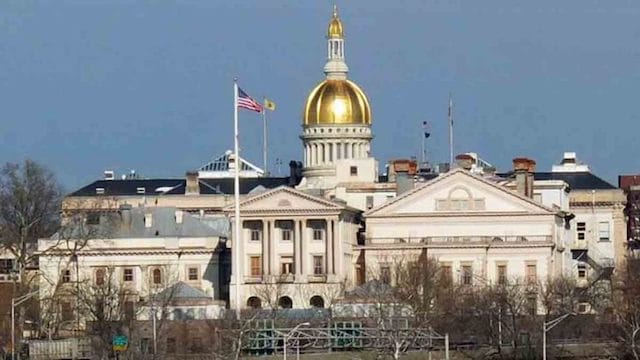 The New Jersey state Assembly and Senate advanced on Monday NJ sports betting bills that will legalize sports wagering in the Garden State — at long last.

The first of three proceedings on such bills began in the Assembly Tourism, Gaming and the Arts Committee, where they celebrated the determination of former New Jersey senator Ray Lesniak, who led the legalization effort against the NCAA and major U.S. professional sports leagues for a decade, leading to a victory in the United States Supreme Court on Monday, May 14.

Eager to pass the bill and get NJ sports betting up and running as soon as possible (and after Delaware begins on Tuesday), Gaming Chairman Ralph Caputo (D-28th District) made it clear to a number of testifying stakeholders that leadership was in agreement about the bill and were looking to move without delay. “I don’t think we’re not going to take any amendments at his point,” he said.

Caputo also heard from various representatives of Major League Baseball, the NBA and PGA Tour as well as former MLB pitcher Al Leiter. Caputo flatly rejected their positions with a sharp tongue. More on this below.

The operative Assembly Bill is A4111, which replaced A3911. The new bill stripped a controversial “integrity fee” provision that would pay the leagues a direct cut of wagers, which surprisingly made an appearance in that earlier bill.

The bill is not yet available on the state’s website but is identical to the Senate version, S2602, which allows the Atlantic City casinos and racetracks statewide to apply for a sports wagering license and engage third parties (some already have) to manage the sports betting platforms, operations and risk-management.

“You guys aren’t asking for an integrity fee are you?” Caputo asked before the league officials began their remarks Monday morning. “You’re in the wrong room.”

MLB VP and frequent state-level league representative Bryan Seeley complained of the bill: “It does not require any cooperation between the DGE and sports leagues, so if we have information of a fix or manipulation, there is no requirement that casinos give us any information.” He said the leagues need such tools and resources to monitor sports betting activity.

Caputo sounded peeved with the arguments as a whole and laid down the New Jersey position.

“Why do you think you’re entitled to an integrity fee?” he asked. “After trying to ‘kill us’ from [offering] sports betting, which we had a right to do, as the Supreme Court told us so. What gives you the right other than desire for additional revenue? The tool you’re looking for is money and you’re not getting it in New Jersey. You might as well face that reality.”

New Jersey lawmakers are of the belief that the leagues already monitor sports betting activity and will incur no additional expenses to do so, and pointed to the fact that Nevada pays them nothing currently.

NBA statement to NJ Assembly committee says it is "not opposed to legal sports betting." but it opposes this bill, and wants 0.25 pct of total amount bet

Caputo pressed Seeley further over the belief that the leagues were pushing the federal government to pass the kind of favorable bill that would grant it an “integrity fee” or royalty.

“That’s why you guys are in Washington trying to get us regulated from the federal level,” Caputo told Seeley.

When Seeley claimed he was unaware of such an effort (which by the way, sources say the NFL is leading) Caputo reaffirmed New Jersey’s displeasure with the leagues’ position.

“You guys are in it to make money,” Caputo said. “This is ridiculous. This is hypocrisy to the highest extent. This is crazy. You guys fought us for nine years.”

Retired New York Yankees and Mets pitcher Al Leiter took a crack at the lawmakers in both the Assembly and Senate as well, and struck out.

A similar hearing also took place on Monday afternoon in the Assembly Appropriations Committee. The NBA’s Dan Spillane, Senior Vice President and Assistant General Counsel, took the floor there to comment on behalf of his league and the MLB and PGA, both of which registered their opposition to the bill without comment.

Spillane barely got a sentence out before he was shot down by the committee chairman and told to limit his comments to the pending amendment or matters related directly to the Appropriations Committee. Spillane went on to all but threaten the state saying New Jersey needs  “to give gives leagues a reason to want to grow those businesses in the state. If it is an inhospitable environment … then we will not grow our businesses here.”

The committee was unmoved and the bill passed.

Also on Monday afternoon at a hearing with the same individuals testifying, the Senate bill cleared its Budget and Appropriations committee by unanimous vote.

Both full chambers are expected to vote and pass the bill on Thursday, and get it on Governor Phil Murphy’s desk. While the Murphy administration has expressed a desire to take a few minutes to digest and discuss the bill, Murphy will face pressure to sign it before the end of the week.

If he does, New Jersey sports betting may begin on Friday at Monmouth Park as well as in Atlantic City, at least at the Borgata, which is owned and operated by MGM and has experienced sportsbook director Jay Rood leading the launch and operations in New Jersey.

The long, protracted, costly battle has finally paid off as they’re about to get off and running in New Jersey.