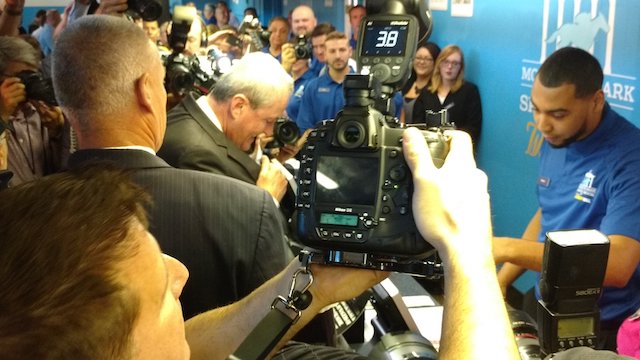 OCEANPORT, NEW JERSEY– The excitement is palpable immediately upon stepping foot into Monmouth Park where New Jersey Governor Phil Murphy made the first legal wager at the William Hill Sportsbook, exactly one month after the United States Supreme Court struck down the Professional and Amateur Sports Protection Act (PASPA), which had blocked New Jersey’s efforts to implement sports betting for over a decade.

“New Jersey’s spirit and determination prevailed,” Murphy says, prior to stepping to the ticket window to make the first two wagers. “I’ll be betting $20 on Germany to win the World Cup and $20 on the Devils to win the next Stanley Cup.”

Media members flood the podium where Murphy addresses a lively crowd hailing from all over New Jersey — Belmar, Brick, Clifton — and even one Las Vegas resident, a self-proclaimed professional bettor and New Jersey native who wanted to take in the scene. There’s a friendly camaraderie, akin to when mildly buzzed New York Giants fans hug strangers after a running back punches in a touchdown.

New Jersey officials who have fought against the NCAA and professional sports leagues since 2009 are here to rejoice. The culmination their efforts and $9 million in legal fees have finally reached fruition. Ron Riccio — attorney for the New Jersey Horsemen’s Association, co-petitioner in the Supreme Court case — stands near the odds board at the front of the house as Murphy speaks.

“We knew in our hearts we would win,” Murphy says at the podium. “I want to give a shoutout to Governor Christie for his extraordinary efforts, as well as all the legislators, Senate President Stephen Sweeney, Ray Lesniak. Dennis [Drazin] and Joe [Asher], you and your operations’ efforts are noted and will be first to benefit. This is huge step forward for gaming and racetracks in New Jersey. The World Cup starts today and baseball is in full swing. There are good times ahead.”

Murphy places his wagers at 10:32 a.m., after which a crowd of patrons rush to the counter. It was on Monday that he signed into the law Assembly Bill A4111 that formally legalized sports wagering in the Garden State. On Wednesday, the Division of Gaming Enforcement published their emergency (temporary) regulations that will govern licensure and regulatory matters.

“I’m going to bet the Giants to win the Super Bowl,” Lesniak says. “It’s a long shot but I’ll take it.”

The neon board spans wide above the kiosks where lines form 20 people deep. They hold sheets showing odds for futures bets for the next Super Bowl, World Series and college football national championship winners. The Alabama Crimson tide are favored once again, two-to-one.

Excitement, Both Muted and Growing

Several patrons say they have previously wagered with offshore sportsbooks, while some haven’t.

Tom is here from Red Bank, New Jersey, and he was confident the state would eventually win the ability to make this day happen.

“I’m pleased to be making a legal bet here but I think it will still be both — offshore betting and a New Jersey sportsbook like this.”

Another gentleman waiting in lines says, “I typically bet online with my friends. This is a new experience.”

Alongside him is Molly, a member of the nearby hotel and hospitality industry. She wants to make a wager on the the PGA Tour’s U.S. Open, which started two hours ago. “Can I still make a bet?” she asks, smiling. “In any case, this is great for our industry.”

A Monmouth Park employee who declined to give his name is standing back watching the crowd.

“The only downside is when somebody runs out of money on Wednesday and bets with their bookie, and pays them the next Thursday,” he says. “But overall it will be pretty good for the state. I think eventually [sports betting] will be legal everywhere, like marijuana.”

His observation is very much an open question as operators in now-legal and to-be legal markets in new non-Nevada states will work to migrate bettors from the black market into the regulated ones.

“Just think, all of these people right now were betting in the black market,” explains Dan Shapiro, Vice President of Strategy and Business Development for William Hill US. “This is now a regulated environment and they’ll get paid no matter what with no questions asked. And of course the state of New Jersey is getting their piece.”

A crowd of about 10 patrons erupt when Russia scores a second goal against Saudi Arabia in the first match of the World Cup.

“Goooooal!!!” they shout in unison.

“It’s been a great day,” Shapiro says. “The governor coming here to make the first bet was special, and I never thought there’d be this kind of lines on day one. There’s baseball and World Cup and look how deep the lines are here and in the sports bar as well. This is a really good sign for the future.”