by Robert Mann
in Industry, Regulation 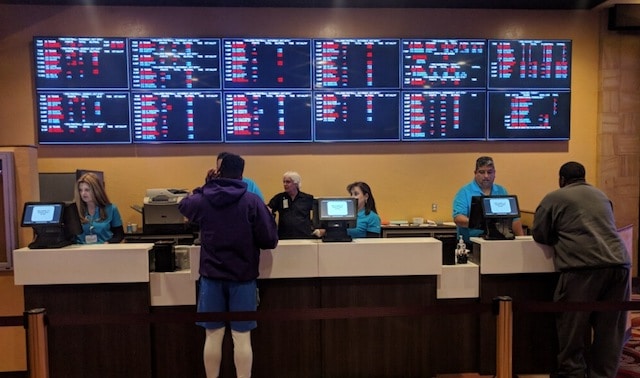 The first bet, made Tuesday at noon local time, was a $30 moneyline win ticket on the Astros to beat the Red Sox (-128) in Game 3 of their ALCS contest Tuesday. The Red Sox won, 8-2.

Las Vegas-based USBookmaking is risk manager for the Santa Ana Star, in operation since 1993 by the Tamaya Nation at the Pueblo of Santa Ana. USBookmaking Director of Operations John Salerno told Sports Handle, it’s a B2B operation utilizing the Stadium betting platform with all employees working directly for the property. It has four windows for taking bets and will be open daily from 12 p.m.-8 p.m., with expanded hours on weekends.

Initially there’s a $5 minimum and $500 maximum bet limit. Parlay cards will be available for customers and the location will function just as a sportsbook would in Nevada, according to Salerno, son of company CEO and legendary Nevada bookmaker Vic Salerno.

John Salerno continued, “The book opened smoothly with about 30 people in attendance, with no formal opening ceremony. We expect a big weekend.”

Salerno said there will be no wagers taken on New Mexico and New Mexico State athletic contests and that, for now, no mobile wagering at the casino or off of tribal land.

Salerno said he knows of no legal concerns that remain on the local (the casino is on sovereign Indian land), state (the office of the New Mexico Attorney General says it will monitor the book and urge lawmakers to regulate it), or the federal levels. When it announced last week that the sportsbook would open, USBookmaking said that sports betting is “permissible” under the tribe’s current compact with the state and the issue has been thoroughly researched.

“Sports betting at the Santa Ana Star Casino is governed by the Pueblo of Santa Ana Gaming Regulatory Commission,” New Mexico Attorney General spokesman David Carl told Sports Handle last week. “As such, we will closely monitor New Mexico’s tribal gaming compacts and work with the legislature for proper statutory and regulatory oversight to require responsible gaming and enhanced integrity to create an even playing field for all.”

Asked if his office would work with state legislators to come up with a regulatory framework for other venues and not interfere with the taking of sports bets, Carl said last week, “that would be fair to say.”

Santa Ana Star is located in Santa Ana Pueblo in Bernalillo, about 10 miles north of Albuquerque, the state’s most populous city, 559,277 in 2016.

According to USBookmaking, the Santa Ana Star operation is one of the top three New Mexico casinos in terms of annual revenue.

The unexpected move to open in New Mexico on Indian land before state lawmakers have enacted laws to regulate sports betting in the state is the latest in a long series of firsts by USBookmaking CEO Vic Salerno.

Following the Supreme Court’s May ruling that the 1992 federal ban on sports wagering outside Nevada was unconstitutional, Delaware, New Jersey, Mississippi and West Virginia saw the opening of state-licensed sportsbooks. New Mexico now becomes the fifth state outside Nevada in which patrons may bet on sports, with the caveat that the state currently has no enabling legislation explicitly permitting it.

Inn of the Mountain Gods, owned and operated by the Mescalero Apache tribe, in Ruidoso, about a three-hour drive southeast of Albuquerque, is another New Mexico casino/resort also believed to soon be opening a legal sportsbook, but no official announcement has been made.

The Choctaw Indians in Mississippi began sports wagering operations in early September at two of their tribal casinos. Mississippi does have legal commercial sports betting, as well, but the state gaming commission does not regulate or oversee activities on tribal lands.