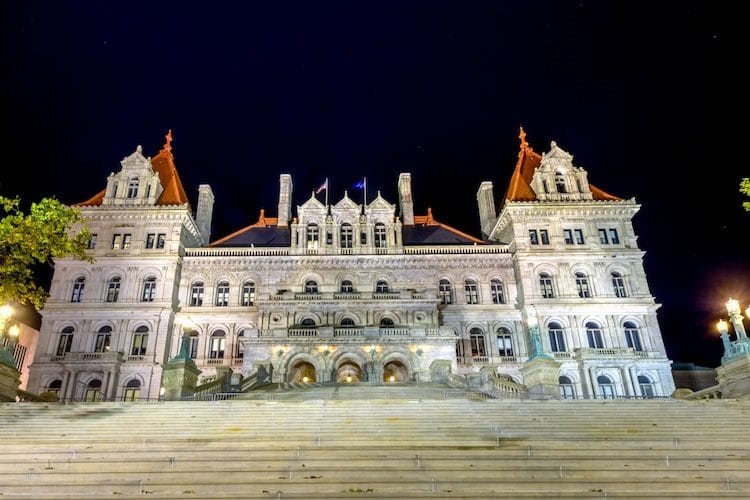 During a four-hour hearing Wednesday, the future of mobile sports betting in the Empire State took center stage. Numerous panelists at the New York Senate committee hearing cited a figure that captures the pulse of the New Jersey marketplace. At present, roughly 80 percent of New Jersey’s legal sports betting handle comes via mobile platforms, including a considerable portion of bettors that reside in New York.

Over the last several months, Addabbo has continually reiterated that legal sports betting is not feasible in New York, without mobile sports betting. Addabbo, chairman of the Senate Racing, Gaming and Wagering Committee, convened the hearing in part to examine the key issues associated with authorizing gaming operators to offer a mobile component as part of their sports wagering menus.

With several weeks remaining in the 2019 legislative session, Addabbo and Gov. Andrew Cuomo remain far apart on the legalization of online and mobile sports betting. A provision in a bill authored by Addabbo, S 17, includes language that would enable an operator to accept mobile sports wagers regardless of the authorized bettor’s physical location within the state. A set of proposed regulations drafted by the New York State Gaming Commission authorizes four upstate casinos — Tioga Downs in Tioga County, Resorts World Catskills in Sullivan County, Rivers Casino in Schenectady County and del lago Resort & Casino in Seneca County — to begin accepting legalized sports wagers upon the finalization of the rules.

When concentrating on the four casinos alone, Addabbo estimates that mobile sports wagering could bring the state $60 million in licensing fees and an additional $30 million in annual tax revenue. Cuomo has come up with more conservative projections. Speaking exclusively to Albany radio station WAMC 90.3 FM in March, Cuomo described revenues derived from mobile as nothing more than a “rounding error,” in the state budget.

A bevy of witnesses on Wednesday testified on the importance of including a mobile component as part of legislation on sports betting. Andy Levinson, Senior Vice President of Tournament Administration, PGA Tour, emphasized that a mobile option will allow New York to bring back revenues from consumers that cross the George Washington Bridge specifically for gambling purposes. Approximately an hour later, FanDuel President and Chief Operating Officer Kip Levin testified that roughly 25 percent of the company’s online wagering in New Jersey comes from bettors that live in New York.

More important, Levinson noted that a robust mobile sports betting marketplace in New York could curb levels of illegal activity throughout the state.

The committee later heard from Chris Grove, partner at Eilers & Krejcik Gaming, an independent research firm based in Irvine, Calif. Grove, head of the firm’s U.S. sports betting practice, told the committee that a mature market in New York with online and retail components could produce revenues in excess of $1 billion annually.

Grove defined a fully-mature New York marketplace as a period when the market concludes the first phase of rapid initial growth, or approximately three to six years from the launch of legalized sports betting. Eilers & Krejcik projects that 95 percent of the revenues (roughly $973 million) would be produced through online wagering, with the remainder from the retail side. Under the scenario, the retail projections are limited to the four upstate casinos.

The ramifications of mobile betting inside New York are enormous, according to James Kilsby, Vice President, Americas at Gambling Compliance. By the fifth year of legalized sports betting in New York, the firm estimates that mobile wagering revenues could spike to $856 million, nearly tripling the projections from Year 1. Although an $850 million mobile marketplace is smaller than the current size of the U.K. market, Kilsby testified, the annual amount would eclipse the current market size of Australia, Italy, France, and Spain respectively.

The Commission could begin to finalize sports betting regulations later this month upon the completion of a 60-day comment period. Although the legislative session ends in June, Cuomo can wait until Dec. 31 to decide whether to sign any standalone bill into law.

When the Commission approved a set of sports betting rules for the upstate casinos in January, a Cuomo spokesperson told Sports Handle that the office believed that a constitutional amendment was needed to approve mobile sports betting. By taking such a route, the process to approve mobile wagering could take up to three years.

Following Wednesday’s hearing, Addabbo told Sports Handle that he could schedule a meeting with Gov. Cuomo’s office to discuss the pertinent sports betting issues in New York within the next week or so.

“The idea is that we’re going to have an earnest, detailed, hopefully constructive and productive meeting,” he said.