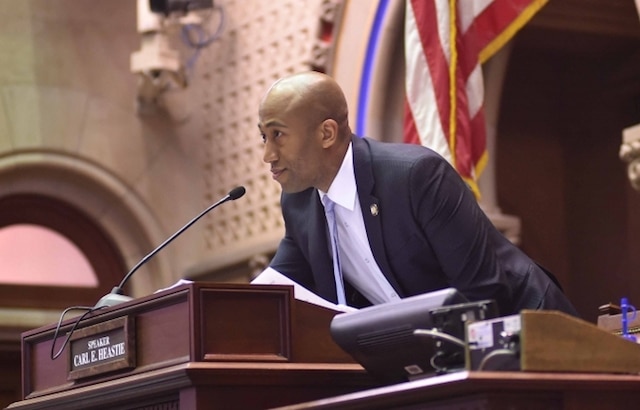 New York State Assembly Member Clyde Vanel (D-33rd District) last week introduced a bill (A10322) that would create a task force to study online sports betting. Coming one month after the state senate submitted a serious piece of legislation (S7900) outlining New York sports betting, Vanel’s bill was not exactly what observers had expected. But that bill may soon be coming.

“We are going to meet with Chairman [J. Gary] Pretlow this week, the Chairman of the Assembly Racing Racing and Wagering Committee and see how we’re going to be positioned in light of the Supreme Court ruling that may happen soon,” Vanel told SportsHandle on Friday. “We’re going to be looking at the senate bill that the Chairman has marked up and see whether or not he’s going to enter it.”

S7900 represents a compromise of sorts with the sports leagues, which have lobbied aggressively in New York and in statehouses across the country where sports betting legislation is under examination. But Vanel, an intellectual property attorney by trade, sees a problem with the section in S7900 that would grant the leagues a property right on sportsbook data. “We are very concerned about that,” he said. “That’s one of the major issue that we have to address.”

More broadly, Assembly Member Vanel, who first won his seat in November 2016, emphasized that New York is determined to position itself to compete in a legal, regulated sports betting marketplace.

How long is too long? A favorable Supreme Court ruling in Murphy v NCAA would mean that New Jersey wins its lengthy legal battle against the NCAA and major pro sports leagues regarding the constitutionality of the 1992 federal ban (PASPA) on full-fledged sports betting outside Nevada. It would be a major boon for sports betting stakeholders, chief among them casinos looking to enter the market. And New Jersey is preparing to install sports betting as its casinos and racetracks right away. So is another New York neighbor, Pennsylvania, which has already passed a law permitting licensure of sportsbook operators, pending a change in federal law.

From Vanel’s vantage, it appears one of the last hurdles to New York’s legislature hammering out a law is the matter of who, if anyone, controls the data — i.e., sells the data — that sportsbook operators use in grading its wagers.

As currently constituted, S7900 would set up “tiers” of wagers that would grant the leagues an effective monopoly to sell data to sportsbooks. In this formulation, any wager not evidenced by a final box score that you’d see in a newspaper (for example, 76ers beat Heat 130-103), would be property of the sports leagues or whichever entity the league has contracted to generate that data.

“The effect of that intellectual property provision giving exclusive ownership by the leagues, and state that the wagering community must license from these leagues to create a property right,” Vanel explained. “These assets will be worth whatever the leagues ask for. And we are very concerned about that. And we have some ideas on how to adjust that but we are very concerned that the way the bill is written, if league X refuses to give information to the wagering community, then the whole industry stops. So, that’s one of the major issue that we have to address.”

We shall see how a possibly/probably forthcoming Assembly bill addresses this issue. Neither West Virginia or Pennsylvania’s laws will grant the leagues any ownership of data. Nevada doesn’t and will not and New Jersey sure as heck won’t.

News flash to state legislators: sports league owners don't have an intellectual property right in independently-gathered game statistics. You can cite to NBA v Motorola (Statrax), CBC v. MLBAM, or event this tweet if you like. #SportsLaw

One thing New York has going in its favor, to avoid getting left out, is one of the later legislative deadlines in the U.S., with adjournment set for June 20. There is only one Supreme Court session, on June 25, after adjournment in which it could release its decision in Murphy v NCAA.

The way Vanel described it, the task force bill he introduced last week is a kind of hedge against the possibility that the court issues a decision that either upholds PASPA or gives a ruling affecting only New Jersey, leaving the other states in waiting for sports betting. In other words, it would keep the New York conversation on sports betting going until such time that the Empire State could act.

“If the ruling doesn’t strike down the statute or they have a narrowly tailored decision,” Vanel said, “then we create a task force of lawmakers and people on the street to figure out what our next steps are.”