by Matt Rybaltowski
in Features, Sports 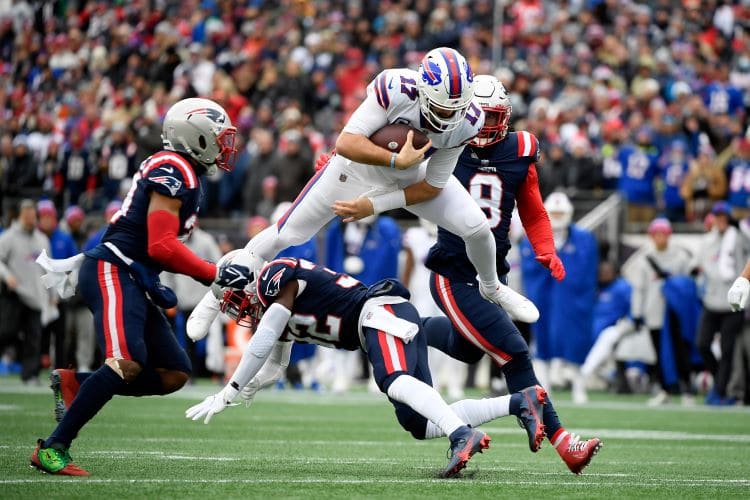 Make a trek to Rivers Casino & Resort in Schenectady and there’s a decent chance you will catch a glimpse of a billboard promoting mobile sports betting in New York.

The banners, much like Caesars Sportsbook commercials featuring Curb Your Enthusiasm star J.B. Smoove as the eponymous Roman dictator, are ubiquitous throughout New York’s Capital Region. With online sports wagering now available in the nation’s fourth-most populous state, the race is on to capture the sports bettor’s wallet.

On Saturday, the first day of mobile sports betting in New York, bettors placed more than 300,000 wagers in the opening hour of the state’s debut, according to geolocation security firm GeoComply. In total, GeoComply recorded transactional volume of 17.2 million during the first weekend of online sports wagering in the Empire State, an unprecedented figure in the short history of the U.S. legal sports betting market since the Supreme Court’s historic PASPA decision in 2018. Convenience appears to be essential, specifically as it relates to in-game betting inside popular watering holes in Manhattan.

While still early, the numbers suggest that sportsbook operators can make a run at clearing $1 billion in online gross gaming revenue in 2022. If the first week of mobile in New York is a harbinger for market dynamics for Year 1 overall, the battle to acquire new customers will be cutthroat.

Since New York legalized mobile sports betting, leading sportsbook operators have grappled with a difficult business proposition. On one hand, the sportsbooks need to spend enough on free bet offers and other clever promotions to outfox their competition. The companies need, however, to be judicious enough with their spending habits to generate a vigorous return on investment relative to a metric known as customer lifetime value (LTV).

“The management of that ratio is absolutely essential to anybody in this industry,” BetMGM Chief Revenue Officer Matt Prevost told Sports Handle. “Every finance team will look at things differently. You have to go in knowing that there’s enough there in the LTV that [the customer acquisition costs, or CAC] are going to matter.”

The importance of the LTV:CAC ratio

In 2020, DraftKings reported that a customer’s lifetime value hovered around $2,500, while the average CAC came in at $371 per customer. Since New York issued conditional mobile sports betting licenses to nine companies in November, Sports Handle has reached out to a wide range of industry experts — sportsbook operators, Wall Street analysts, marketing consultants, and others — to gauge whether the metrics in New York will be in line with the rest of the nation.

The unique aspects of the New York market make the exercise a challenging one, demonstrated by varying opinions. Asked to predict whether the CAC costs in the market will be sustainable, some believe they could be astronomical at first and eventually come down significantly. Analysts without skin in the game suggested the acquisition costs could fall within a range of $1,000 to $2,000 per customer, while those representing a New York mobile sportsbook offered cautious optimism that the costs would not be that high.

“Oh, I hope not. I hope it is much less, that would be insane,” Bally’s Chairman Soo Kim told Sports Handle last month on the sidelines of the SBC North America conference at the Meadowlands. “I don’t even understand how people would make money there.”

The opportunity in gaming has never been larger … we’re lucky to be a part of it — @Ballys CEO Soo Kim speaking with @CNBC’s @contessabrewer #SBCAmericas #SBCSummitNorthAmerica #sportsbetting #dfs pic.twitter.com/w9KFE3tpAq

Bally Bet is one of four prominent companies that took part in a so-called “super bid” to gain market access in New York. Two of the four, DraftKings and FanDuel, are live now, while Bally Bet and BetMGM are preparing for launch.

Market trends have evolved over the last 15 months when DraftKings’ LTV:CAC ratio remained around 6.75:1. For context, a ratio around 3:1 is typically viewed as one that is preferable among Saas (software as service) companies, a subset used as a comparative tool by analysts for the valuation of sports betting IPOs. When the ratio nears 5:1, it is widely believed that the companies are stifling growth by spending too little. Conversely, as the ratio falls closer to 1:1, those companies may be spending too much.

When calculating lifetime value, firms look at the “churn,” or the rate at which customers will discontinue their relationship with a company. For instance, if 5% of a company’s customer base stops placing bets on the mobile sportsbook over a 12-month period, the average customer lifetime will be around 20 years (1/churn rate of 5%). The company will also produce a retention rate of approximately 95% (1.00-churn rate).

In computing customer per acquisition metrics, one of the most challenging aspects lies in determining what goes into the numerator, Prevost explains. Though eye-popping, it is now customary for top companies to spend hundreds of millions on sales and marketing per quarter.

DraftKings spent $304 million in the category during the third quarter of 2021, marking the fifth consecutive quarter that the figure topped $170 million. Caesars CEO Tom Reeg, meanwhile, has unveiled a blueprint detailing plans to invest $1 billion on sports betting and iGaming spend dedicated to capturing market share.

On Monday, Reeg made an appearance on CNBC’s Squawk Box morning show to discuss the company’s opening weekend in New York. Caesars is offering new customers $300 in free bets, as well as an initial deposit match up to $3,000. Reeg said that Caesars will incur “significant launch costs” from such incentives and from airing commercials during top sports events. Still, he projects that Caesars Sportsbook will be profitable as an enterprise by football season of 2023, while the company’s sports betting division will deliver EBITDA margins of 25-30% at maturity.

"Our expectation is we'll be profitable as an entire enterprise, that will include New York, by football season of '23," says $CZR CEO Tom Reeg on launching its sportsbook in New York. pic.twitter.com/0k8DhK4lCh

New York, however, presents a unique market environment. A nation-high 51% tax on online gross gaming revenue will put immense pressure on operators to spend wisely. EBITDA margin, which measures a company’s earnings as a percentage of revenue, may be a better measuring stick of long-term success than revenue alone. In other states, it is considerably easier to achieve a desired margin with a low commercial tax rate, said Crispin Neiboer, a partner at U.K-based advisory firm Orange Cap Ltd.

Consequently, the suffocating tax rates could be a large determinant of whether New York sportsbooks can sustain the advertising blitz beyond Year 1.

“There will be a lot of soul searching in how heavy you’ll go with marketing,” Neiboer told Sports Handle.

The path to profitability

The environment in New York may also force operators to brainstorm creative ways to separate themselves from the competition. One customer engagement solutions provider, Philadelphia-based OtherLevels, sends automated intelligent messages to sports bettors as a way of informing customer behavior.

For example, on an NFL Sunday just after New Year’s, you may be checking NFL scores in between pickup games at a local YMCA. Then, suddenly, Antonio Brown rips off his jersey and storms off the field at MetLife Stadium. You have a sizable bet on the Bucs moneyline. An alert from OtherLevels on Brown’s departure may convince you to hedge with the Jets on the in-game market.

“To me, it’s about player engagement,” said Jenny Lu, who serves as general manager of OtherLevels’ North American division. “You can’t retain them by throwing money at them. You retain them by actually keeping them engaged and giving them information that they are interested in hearing.”

Industry heavy-hitters may be able to swallow the excessive costs if they can deliver strategies to use sports betting as a way of augmenting other “adjacent sectors,” according to Lloyd Danzig, founder and managing partner of Sharp Alpha Advisors. These sectors include ancillary business segments such as digital collectibles, crypto trading, brick-and-mortar sports bars, and NFT marketplaces, among various NextGen initiatives that cater to millennials.

“Because New York is such a highly visible state and because there are so many eyeballs on the operators, some operators may be marginally less sensitive to customer acquisition costs, because they are looking to bolster lifetime value with revenue opportunities outside of sports betting,” Danzig told Sports Handle.

DraftKings, for one, is investing heavily in its NFT marketplace. Last July, DraftKings announced a partnership with Autographs, a digital sports collectibles company backed by Tom Brady. In terms of New York, DraftKings is playing the long game. DraftKings CEO Jason Robins plans to employ a playbook similar to one the company used in other prominent states to pursue a “two-to-three year path to profitability” in New York.

For those who don’t know the $DKNG story:

When asked if the top players in New York can turn a profit so quickly, others aren’t so sure. While Neiboer indicated that DraftKings can take steps to become profitable by acquiring a smaller operator, he believes the task is more challenging if the company tries to do it organically. The environment to acquire customers in New York will be intense, and Neiboer expects DraftKings’ competitors to continue fighting.

“It will be awhile before anyone makes any money in New York,” Neiboer asserted.