The NFL will have a tough time topping the excitement of last week, but let's give it a shot 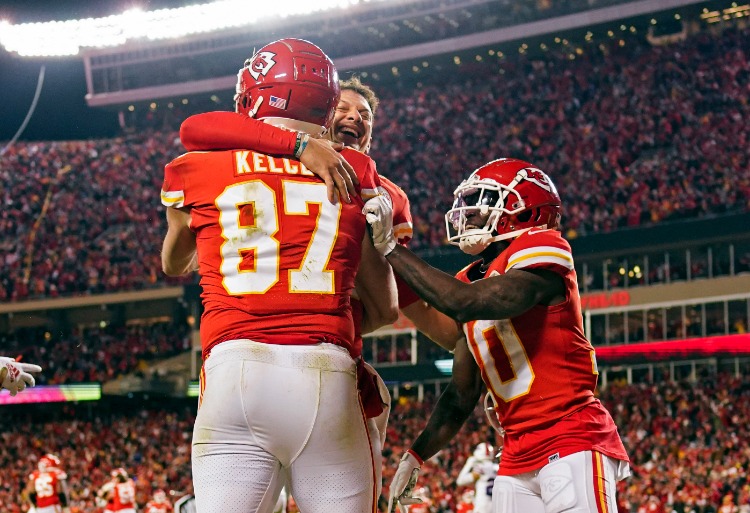 What is there left to say? Last weekend’s slate of games were … the best weekend of the NFL, ever? All four contests went down to the final play and Chiefs-Bills was one of the best games of all time, although the ridiculousness of the end cost me a few hundred dollars in DFS play. (No worries, not bitter, cookies crumble, etc.)

Truth is — and I know this sounds made up, but I swear I said it — when the Bills kicked the ball out of the end zone with 13 seconds left, I said to my son, “That might actually be too much time to leave Mahomes.”

They had their timeouts, and all Mahomes needed was two completions against a tired defense that had to play off the ball, lest they watch Tyreek Hill burn them again.

I guess it would have been shocking if Mahomes didn’t get it done.

A masterclass by Jim Nantz and Tony Romo.

The final few minutes from Sunday’s CBS broadcast of Chiefs/Bills.

Unforgettable game. What a presentation, too.
pic.twitter.com/e9OACKTDgc

Then overtime came, which was the only blemish on the weekend. We can argue the rules back and forth, but from a fan’s perspective, not giving the other team a chance on offense just seems like the wrong way to do this. Who says no to “last licks?” (Oh, I also had a ton of Bills-heavy best ball teams that advanced and are now dead. No worries, not bitter, win some, lose some, etc.)

This week’s conference championship games actually both set up well on paper. It feels like the Bengals can keep up with the Chiefs — as they already did once in thrilling fashion a few weeks back — and whenever two teams meet for a third time, like the Rams and Niners, you have to figure the game is going to be close.

All right: Let’s see if I can make any money this week after that DFS and best ball fiasco last week and — oops! — I just punched a wall. Moving on. Onward and upward.

Well, the Packers and Bills crushed me here last week, and if we’re going to do a +1000 parlay, it’s going to have to be same game. So let’s head over to FanDuel, which is offering a $10 “risk-free” SGP. Let’s see here … how about Joe Burrow and Pat Mahomes over their passing yards numbers (287.5 and 285.5 respectively), Byron Pringle over 37.5 receiving yards, and Travis Kelce over 72.5 yards along with him getting an anytime score — all for +1081?

Rationale? I have a hard time seeing Chiefs-Bengals being a slog, so over on the quarterback yards. As for Pringle, he’s gotten seven or more targets in four of the last five games, and Kelce is Kelce. I was toying with adding JaMarr Chase’s 83.5 yardage prop here, but Burrow isn’t shy about using his other weapons if Chase ends up getting blanketed.

Coming off a thrilling but unprofitable weekend where 13 seconds of Mahomes was too much for the Bills and @jeffedelstein… he's trying to get amped up for a 2-game slate.

Plus the mortal lock of the week and a TV recommendation. #NFLhttps://t.co/aMR5prIBdk pic.twitter.com/zspQwyoOkP

Well, I said to game stack the Bills-Chiefs game. What a genius, amirite?

This week, I think there are ways to differentiate yourself from the field by simply going against the grain. You could play Clyde Edwards-Helaire and Jerrick McKinnon together and hope that’s where the Kansas City Chiefs touchdowns come from. You could game stack the Rams-49ers and hope that game somehow shoots out. Might it be worth it to throw in a Trey Lance lineup? Why not?! Bottom line: Don’t be afraid to get different on this, or any, two-game slate.

Had the Rams last week, so good for me. This week? Well, if I had to pick one, I’d pick the Bengals. That Joe Burrow sure seems like one cool customer, and the idea of the Bengals winning the Super Bowl with Burrow getting elevated to “Is he the new Brady?” territory sure sounds fun. I mean, unlikely outcome, but why not root for it?

I did terribly last week, which is odd, because I did pretty well in DFS (except for Patrick Mahomes stealing money from me, no worries, plenty of drywall where that came from).

Well, I really do like the Kelce over 72.5 receiving yards prop from FanDuel at -115. And while I like the Pringle yardage prop, I’m going to like the receptions prop a lot better when that appears. I assume it will be 3.5, and I will attack that. I also like the Mahomes rushing prop – over 30.5 at -115 – on DraftKings.

I’m also interested in the Matt Stafford under 2.5 rushing yards (-115) on DraftKings. 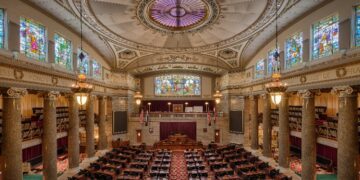 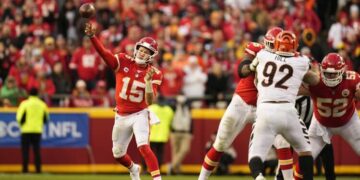