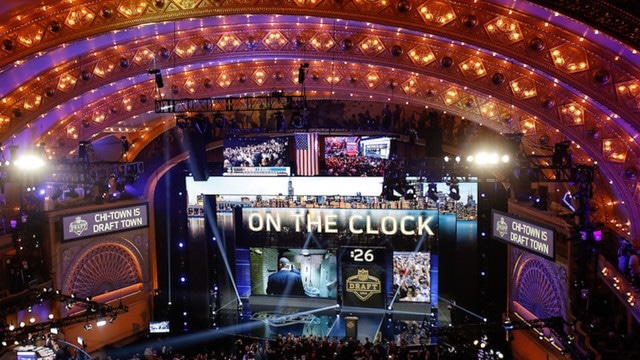 Four years after taking its premiere off-season event on the road, the NFL made its splashiest announcement about the draft yet. In 2020, the NFL Draft, which had been held in New York City from 1965-2014, will be in Las Vegas. After decades of shunning America’s gambling capital, the decision is the NFL’s second in two years to embrace Las Vegas. In 2017, the league voted to move the Raiders from Oakland to Las Vegas.

NFL.com on Wednesday reported that league commissioner Roger Goodell announced that the owners had voted to move place the draft in Las Vegas. The announcement came during the NFL’s Winter Meetings, which are being held in Arlington, Texas.
“The NFL Draft is one of the most-anticipated events of the year and we are excited to take it to Las Vegas,” Goodell said in a statement. “We look forward to working with the Raiders, Las Vegas officials and the Las Vegas Convention and Visitors Authority to create an unforgettable week-long celebration of football for our fans, the incoming prospects and partners.”

Las Vegas was among a handful of cities in the running to host, among them Kansas City, which was shut out in both 2019 and 2020.
Since leaving New York in 2014, the league has held the draft in Chicago (2015, 2016), Philadelphia (2017), and Arlington (2018). Next year’s draft is set for Nashville. The 2020 draft in Las Vegas will, in essence, kick off the NFL’s official presence in the city as the stadium construction continues. The Raiders are scheduled to begin play at a new state-of-the-art stadium in 2020.
But before the NFL or the Raiders get to Las Vegas, the league is planning to fall in line with the three other professional leagues, all of which have partnered with MGM Resorts International in data-sharing and intellectual property/marketing deals.
It wouldn’t be too much of a stretch to assume that the gaming giant will try to make it 4-for-4 by signing on with the NFL, as well. Though the league has been lobbying for a federal framework for sports betting and has not aligned itself with the NBA and Major League Baseball in asking states to mandate an “integrity fee,” some of its teams have been actively seeking partners.
Dallas Cowboys owner Jerry Jones in September announced an exclusive deal with the Oklahoma WinStar World Casino to share its logos and marks in branding and advertising. The deal was the first of its kind, though others among the four professional leagues have since followed.
When the Raiders kick off in Las Vegas in 2020, they will become the second professional sports franchise to call the city home. In 2017-18, the NHL Vegas Knights became not only the first Las Vegas-based pro team, but the first expansion team in the history of American professional sports to reach its league championship.
Share3TweetShare