NFL Week 11: We Have Entered The Naked Mole Rat Portion Of The Season

Translation: A little bit of fatigue, plus the feeling we know it all, and we're entering dangerous gambling waters 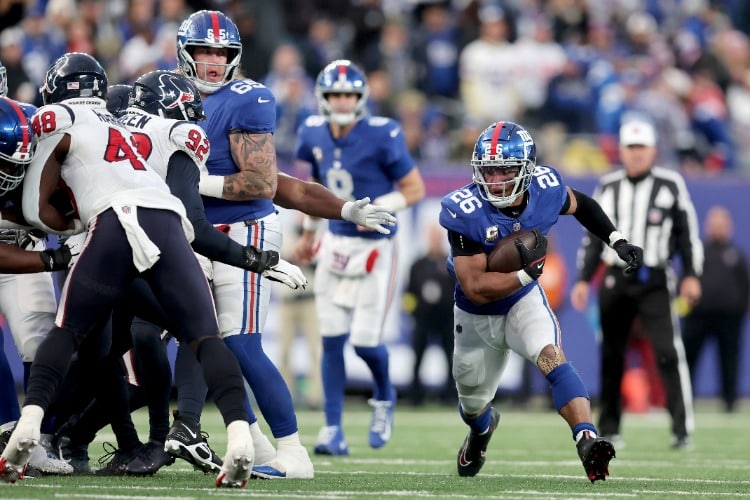 If summer has the “dog days,” what does fall have?

How about … “naked mole rat nights”? (There is a definite lack-of-animals-that-start-with-the-letter-N situation out there in the English language. I thought I was going to come in hot with something snappy, but no such luck. We’ve got naked mole rats, newts, nightingales — it’s a short list.)

Anyway, we’ve hit the naked mole rat nights of the NFL season. We’re entering Week 11, and if you’re anything like me, there’s the slightest bit of fatigue setting in — especially if you’re having a not-stellar sports betting and DFS season. I’m down a bit as we head into the back half of the year, and — much like a naked mole rat, which can live for up to 18 minutes without oxygen — I could use a few minutes to just come up for air.

Add in Thanksgiving coming up and Christmas shopping entering the chat and family get-togethers and kids off school and short days and long nights, and the grind is real.

Then add in the sports betting component, and it’s a minor miracle I remember to maintain my tunnels, so to speak.

Having said all that …

But I’ve learned, over the years, that this is the most dangerous time for me as a gambler. There is the aforementioned fatigue, plus I feel like the ground beneath me is settled, and I know all there is to know about what’s going to happen next. I’m at the stage of the season that when I go to build my dummy DFS lineup, it takes me all of a minute to figure it out. My cross-out list goes from roughly zero in Week 1 to roughly 98% of the field come Week 11.

And I usually pay for it.

Why? Because with knowledge — real or perceived — comes closed-mindedness. Add in the holidays and the fact we’re closing in on three months of NFL action, and it’s all too easy to start getting a bit lazy.

Point here is just when you think the queen has eyes for you, some other naked mole rat sashays his pink rump down the tunnel and you’re squeezed out.

Maybe that’s not the point.

Here’s the point: It’s very easy to be set in our ways at this stage of the season, but it’s very important to not get stuck in a rut of our own making. This is the time to think a bit outside your comfort zone. Surprises abound, even when — actually, especially when — you think you know it all.

Speaking of knowing it all — or in this case, nothing — let’s sashay our pink rumps right into Week 11!

Ran our perfect record to 0-10 with a bad loss last week, so let’s just get right to this week’s pick, shall we?

I placed this Thursday morning at DraftKings, which means I get to keep the Bills-Browns over: over 41.5 in Browns-Bills, over 45 in Giants-Lions, Commanders giving three points in Houston, Cowboys giving 1.5 points in Minnesota, Chiefs giving 5.5 points at Chargers. It comes to +2383. Three road favorites and two overs, one in a snow game and the other involving the Giants.

Deep breath and … rationale: I was convinced the weather either was going to be OK or the NFL was going to move the Bills game, and so that’s that. It was a no-brainer over. (Most sportsbooks would have voided that leg once the venue changed, but DK lets it stand.) The Giants-Lions over worries me, but the Lions defense is so lousy and the Giants are vulnerable to slot receivers, so … yeah. The Cowboys would’ve been at least three-point favorites if A) the Vikings lost in Buffalo like they should’ve and B) if the Cowboys held on to beat the Packers like they should’ve. The Commanders might be (gulp) good. And the Chiefs are definitely good.

I mean, I have to win one of these eventually, right? Record sitting a very ugly 2-8. This week, I’m going to tease three of the parlay picks at Caesars at +160: The Chiefs getting a point, over 35.5 in the Buffalo game, and over 39 in the Giants-Lions tilt. Waiting to see if Caesars lets this bet stand.

Fell to 4-6 here with the Cowboys collapse costing me the victory. Boy, did I have a bad betting week last week. Anyway … let’s skip ahead to Monday night in Mexico City, where the Cardinals are getting eight points against the 49ers on FanDuel. Will Kyler Murray play? Not sure it matters, honestly. Colt McCoy is good enough to keep the chains (slowly) moving, and the Cardinals’ pass defense is underrated and will undoubtedly force Jimmy G into a few bad decisions. Add in the late-season division game, and I’m not ready to lay eight points.

No, but I did fine enough. Maybe stick with the DFS, Jeff.

DraftKings plays of the week

Oh brother, this is the ugliest — and therefore toughest — week of the year. Especially at wide receiver, where Kupp is dunzo; Hill, Waddle, Evans, Godwin, Metcalf, Lockett, and Kirk are on byes; Deebo, Aiyuk, Hopkins, and Moore play Monday night; and whoever is at wideout for the Chiefs and Chargers are on Sunday night. So … Parris Campbell chalk? Nico Collins chalk? Kendall Hinton (if healthy) chalk? Justin Jefferson chalk? To be different, go middle of the road at wideout. Maybe Terry McLaurin, and then some dart throws. Like, literally just throw darts at the mid-priced wideouts.

Running back isn’t much cleaner: It’s Saquon Barkley and a lot of “well, maybe could be” options.

Best advice this week is … probably don’t listen to anyone’s advice. Zig where everyone is zagging.

UPDATE: We found out what can go wrong. Voided at most books. Let’s go with the Giants laying three.