One is a scumbag, the other could've broken the league 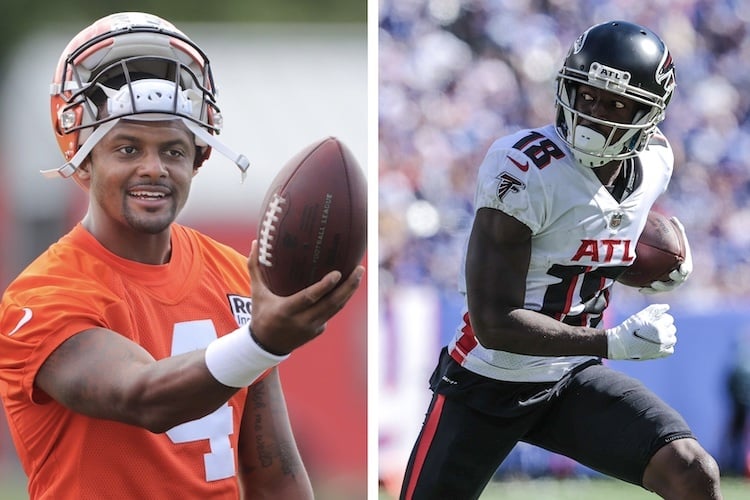 At this point, it seems pretty fair to say that Deshaun Watson is a scumbag. At minimum, his choices concerning massages and the towels he was using (they were small) reek of scumbaggery.

I mean, reading through Judge Sue L. Robinson’s ruling — and the decision that Watson should be suspended for six games — leaves little doubt of the scummy nature of Watson’s behavior.

“Watson reached out to women whose professional qualifications were unknown and unimportant to him,” Robinson wrote. “He insisted on using a towel, increasing the probability of exposure. He insisted on having the therapists focus on areas of his body that not uncommonly triggered erections. And he engaged in this pattern of conduct multiple times.”

Of course, many observers decried the ruling, thinking Watson should have been suspended for longer, or — as many pointed out — suspended at least as long as other players whose “crimes” were legitimately less serious.

Calvin Ridley was suspended an entire season for gambling $1500 on NFL parlays. Deshaun Watson got six games for 30 women accusing him of sexual assault.

One of those who got a stiffer penalty from the league was Calvin Ridley, who was suspended for a full year for betting on NFL games. Those included games featuring his team, the Atlanta Falcons, though Ridley was inactive for those games and bet on, not against, his team.

But before we get to Ridley, let’s go back to Watson for a moment, and the punishment that Robinson — whom both the NFL (which was seeking a year-long ban) and the NFLPA signed off on — handed down.

Reading between the lines, it would appear that Robinson thought a longer suspension might have been called for, but she noted in previous cases involving “domestic or gendered violence and sexual acts,” six-game suspensions were the norm. And being that Watson’s situation was non-violent, she was bound by “standards of fairness and consistency of treatment among players similarly situated.”

Watson — again, scummy and calculated — was not a violent offender, and as such, Robinson ruled, the standard six-game suspension was basically the upper bound of NFL policy and tradition, as established by the NFL and the NFLPA.

So, yes. While Josh Gordon saw his career melt away because he smoked weed, and Tom Brady lost four games because he might’ve been aware some footballs weren’t blown all the way up, a boatful (well, rowboatful) of NFL-ers have beaten the crap out of women and gotten less time away from the game than Watson.

Clearly the NFL should start laying the hammer down on domestic violence and sexual assault. It would certainly seem that physically assaulting a woman should yield more than — as it turns out — a standard of six games off the field. Robinson offers a road map in this ruling for doing so: Proactively amend the league policy, so the next time an offense like Watson’s occurs — and there will be a next time — the league isn’t constrained by what it’s done in the past, but can instead go by carefully considered policy.

Ridley is a whole ‘nuther problem

Comparing Watson’s behavior (and punishment) with Ridley’s behavior (and punishment) isn’t what we should be doing here. We are deep into apples-and-oranges territory. While what Watson did is, inarguably, worse as far as real life goes, Ridley’s decision to bet on NFL games is, inarguably (and a little sadly), worse for the game of football. (Even though I feel like I once came up with a modest proposal to allow players to bet.)

Listen: We haven’t stopped watching NFL games despite some of the players’ questionable-at-best behaviors, and we certainly haven’t stopped rooting for them. I mean, how many people will refuse to draft Deshaun Watson on their fantasy football team because he pretty much gave over two dozen massage therapists no choice but to touch his junk (allegedly)? (Let me reiterate: Watson equals scumbag.) How many people were counting on the Roger Goodell-led NFL to exercise good taste here and administer swift justice?

Eventually, when Watson takes the field for the Cleveland Browns in Week 7, I’m guessing the Dawg Pound is going to let bygones be bygones.

But Ridley, or other NFL players, betting on the outcome of NFL games?

And the NFL thinks so as well, and the NFLPA is OK with that. After all, the latest CBA spells it out: The NFL has the right to kick a player out of the league for gambling on the NFL (see page 366).

Seriously: If we knew players were actively wagering on the games they play, perhaps wagering against themselves, perhaps putting the fix in, well … that’s that for the NFL. It would be a scandal to end all scandals. While you may agree or disagree with the NFL’s stance on its players betting on football games, it’s pretty hard to make the case that a game-fixing scandal would be easily forgotten by the public.

This is not to say beating up a woman (or exposing yourself with the hope of some illicit action) is less bad than gambling on football, but it is to say when it comes to protecting the game itself, players wagering on the outcome of the games is objectively worse.

Certainly, I’d rather live in a world where we hold these two disparate acts to different standards, but — at least for the time being — we don’t.

In the world of the NFL, Watson deserves a punishment, but Ridley deserves a bigger one.