Over And Out: NFL Win Totals Betting And The Power Of Optimism, Injuries 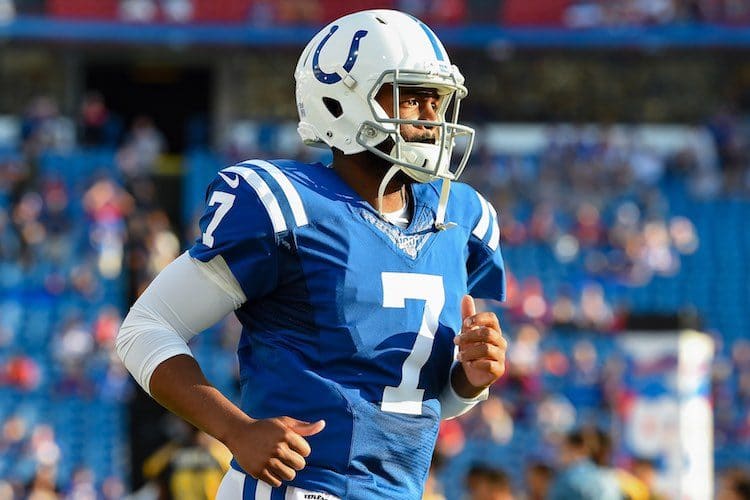 For ardent football bettors, the rush to wager on an assortment of NFL season win totals before the season begins has almost become an annual rite of passage.

In a twist of fate, those who waited until the final days before the 2019 kickoff will benefit from a stunning announcement that could shape the direction of the AFC standings. A decision by Andrew Luck to retire from professional football on Aug. 24 led to a two-game adjustment on the Colts’ total at Station Casinos in the Las Vegas Valley.  With a considerable amount of money on the over of 9.5 wins prior to Luck’s announcement, the Colts had trended toward 10 regular season victories, said Chuck Esposito, director of race and sportsbook operations at Sunset Station in Henderson, Nev.

Following the announcement, Station has lowered the Colts’ total to 7.5 wins. At many sportsbooks on the East coast, that number lowered further to 6.5.  In Luck’s absence, third-year man and former Patriot Jacoby Brissett, who started 15 games for the Colts in 2017 when Luck rehabbed, will inherit the starting spot. The Colts since signed Brissett to a two-year, $30 million contract and also added former Patriot reserve and Texans starter Brian Hoyer as a backup.

Luck’s retirement also has had wide ranging effects on several teams in the division and the conference as a whole, as final bets pour in post-Labor Day, ahead of the regular season kickoff on Thursday night between the Green Bay Packers and Chicago Bears.

Since Luck’s announcement, Station has also made adjustments to the win totals of the three other teams in the AFC South. All three, Houston, Tennessee and Jacksonville, have win totals of at least 8 regular season victories, Esposito added.

The unexpected decision also underscores a trend that has prevailed in NFL betting in recent years. A few seasons ago, an injury that sidelined a star quarterback could move the line of an individual game three to four points, according to Esposito. More recently, such an injury has compelled books to adjust the line around seven points due to the absence of the quarterback. When accounting for an entire season, season-ending injuries to a handful of prominent quarterbacks could be responsible for an adjustment as large as Luck’s retirement, Esposito noted.

“Had a Drew Brees, a Tom Brady or in Cam Newton’s case, had he been injured for the season we would have seen an adjustment on the Panthers very similar to what you saw on the Colts,” Esposito said. “It becomes a significant adjustment now, because it has become such a QB driven league.”

Here are some other trends in season win totals to keep an eye on before Thursday’s opener.

A host of teams have received a good amount of one-way action on the under, Esposito said. Over the last several weeks, bettors have trended toward the under on the Rams (10 wins), Browns (9 wins), Redskins (6 wins) and the Dolphins (4.5 wins, down from 5 after the blockbuster trade sending left tackle Laremy Tunsil to the Texans for multiple draft picks).

In order to win $100 on the Rams, a bettor must place $135 on the under. Of course your mileage will vary based on state and sportsbook. It’s also wise (if not imperative) to go price/line shopping. In New Jersey, the total has moved to 10.5 on the Rams at most shops and the price -140, if not much higher: it’s currently -165 at playMGM for under 10.5 W’s.

Of the four teams, the trends associated with the Browns confound Esposito the most. On the futures market, Station Casinos has written more tickets on the Browns to win Super Bowl LIV than any team in the league. The additions of Odell Beckham Jr., Olivier Vernon and Kareem Hunt have made the Browns a chic pick to capture the Lombardi Trophy. At odds of 12/1, the Browns have lower odds than more than 20 teams across the league.

Writes the Sportsbook Consigliere, an oddsmaking veteran, in a recent Sports Handle column: “For the first time ever, I can say I’ve seen seven months straight of at least one bet on the Cleveland Browns to win the Super Bowl — THIS YEAR.”

When it comes to over wagers, Station Casinos has also taken considerable action on a few others. Esposito, in particular, has been surprised by the amount of action the sportsbook has received on the Bills (over 7 wins). A solid preseason by Sean McDermott’s team combined with improvement from second-year quarterback Josh Allen has spurred interest on Buffalo. Bettors also overwhelmingly prefer the over on the Chiefs (10 wins) and the Eagles (9.5 wins), Esposito said.

A spate of injuries has also played a role on betting patterns. Following a 12-4 season in 2018, the Chargers still remain one of the top picks to win the Super Bowl. Bettors, however, have soured somewhat on the Chargers following the loss of Russell Okung and Pro Bowl safety Derwin James for at least the first month of the season. The possibility of an extended holdout by Melvin Gordon provides added uncertainty. There is some juice on the Chargers when backing an under of 10 wins (-125), while the over currently remains at -105 on Station’s board.

win totals much different from 30 yrs ago as we move the juice much more than moving numbers but here are teams with numbers move bears and colts under jags u7nder chiefs ov pats under raiders under wow it is 30 yrs ago when i first put up cows win totals at 5.5

Since the implementation of a hard salary cap in the mid-1990s, the NFL arguably has been transformed into a league of parity. While there are outliers each year on both tails of the bell curve, most teams fit within a tight range for season win totals.

When looking at season win totals, the majority of NFL teams fall between 6.5 wins and 9.5 wins on Station’s board. Five teams, the Patriots, Chiefs, Chargers, Saints and Rams, have totals of 10 wins or higher. Six others, the Cardinals, Bengals, Dolphins, Giants, Redskins, Raiders, have totals under 6.5 wins. As a result, approximately two-thirds of the league falls within the aforementioned narrow range.

As you consider various wagers, keep the following trend in mind. Over the last few years, teams with win totals of 10 or higher have largely trended to the under, while teams with win totals of 6 or lower have tended to hit the over, Esposito said. Bettors who have based their wagers on the trends have won at a clip of 65 to 70 percent, he added.

Station Casinos has a limit of $1,000 for its regular season win total bets. Historically, win total betting on the NFL has produced a larger handle at the book than any other sport, according to Esposito.