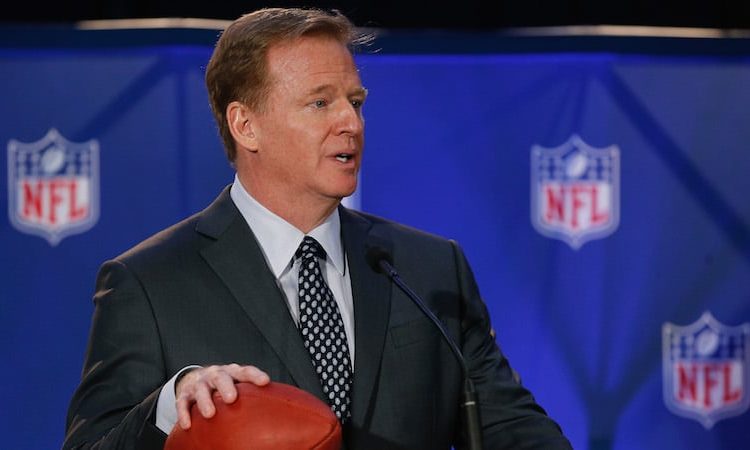 The NFL Communications office on Monday released a statement from Commissioner Roger Goodell that outlines “four core principles” regarding sports betting in the U.S.

Last week after the Supreme Court ruled in favor of New Jersey and against the leagues in Murphy v NCAA, striking down the 1992 federal ban on full-fledged betting outside Nevada known as PASPA, the league announced it would seek from Congress a “core regulatory framework” for legal sports betting. This statement today clarifies those goals and the league’s intentions. Below we’ll unpack the four core points.

The NFL has long known that sports betting is (very) good for business. On the hardwood, Dallas Mavericks owner Mark Cuban declared that this ruling “doubled the value of the professional sports franchises in a second.” Some NFL owners are giddy at new revenues that sports betting expansion may bring. The only remaining questions are how the NFL will manage this Brave New World, and how it can most effectively monetize the opportunity.

New NFL Sports Betting Position: Congress Should Adopt These Four ‘Core Principles.’ Now What Does It All Mean, and Will Congress Take Action?

First, consider what Goodell said at the NFL owners’ meetings in March. Those meetings included a presentation on possible state-by-state regulation and on monetization. Par for the course, Goodell was vague.

“I think what we did this week was make sure people understood the, I would call it, prospects and potential for how gambling can change, in part because of the Supreme Court decision, how it’s evolved on its own beyond that. And this isn’t new work. We’ve been focusing on this for several years of how does it affect the way we operate.”

Core Principle #1: “There Must Be Substantial Consumer Protections.”

Meaning: Pretty much what it says. All sides can agree on this — the leagues, states, sportsbooks, consumers. The elimination of PASPA is a win for all parties. Everyone agrees that allowing states to legalize sports wagering will produce a safer environment for people who already are illegally wagering to the tune of about $150-$400 billion annually, as well as for new market entrants.

All stakeholders should sit down and basically listen to Nevada regulators on this core point. They’ve been doing it for years and years, and already aid the leagues in monitoring line movement for any irregularities. Other “gaming states” across the country have experienced regulators as well, including New Jersey. Achieving these substantial protections shouldn’t be difficult.

Core Principle #2: “Sports Leagues Can Protect Our Content and Intellectual Property From Those Who Attempt to Steal or Misuse It.”

Meaning: This notion isn’t new or unique to sports betting. The NFL more than any of the other major leagues is very protective of its footage/video. Consider its social media policies and go read Awful Announcing’s 2016 breakdown of the NFL’s “archaic, backwards, incomprehensible, mind-numbing, counter-productive, heavy-handed, anti-social social media policy.”

Not an understatement. The NFL doesn’t even allow its own teams to post video showing plays, preferring to govern from headquarters any and all dissemination of video and highlights on social media. The NFL also cracks down and cease-and-desists people who share clips.  Numerous sports media publishers wrestle with this policy, even broadcast partners. It’s the leagues’ right, but just bad policy.

The NBA, being more wise and progressive and mindful of the big picture, welcomes social media sharing of video, letting fans do the actual work!  Just take a look at World Wide Wob’s Twitter feed.

MLB is somewhere in between, probably closer to NFL policy in its protectiveness. MLB had the popular account of “Pitching Ninja” shut down in early April, and his following of 56,000 avid baseball fans, and even players, were unhappy.

@MLB @Twitter please let @pitchingninja back on & let him do his thing! He is helping young players expand their game/introducing the game to thousands of new ppl. MLB players LOVE the account & people get to interact w/ us based off our skill set. #MLB #pitchingninja #twitter

But the Atlanta-based pitching coach and his account are back and apparently in MLB’s good graces.

“I think there’s this whole community out there where people just want to help the game get better and share information, and then there’s other entities that want to shut that down,” said the man known as “Pitching Ninja.” “Is it going to be run by suits or run by the people?”

Sources tell Sports Handle that the NFL views one of its biggest sports betting revenue opportunities in the sale of video in connection with sports betting. The NFL is limited only by creativity here.

A Couple of Examples and Ideas for the League on This Front, Free of Charge!:

(a) Someone might have a prop bet on Jarvis Landry’s total catches or yardage. He might wish to view only Landry targets and receptions after the fact, or perhaps all of Baker Mayfield’s pass attempts. The league has never packaged its video to show such a thing. How much could it charge for such a package? Ninety-nine cents a video or a monthly package of a-la-carte videos clips may be appealing.

(b) Someone might have bet the second-half total. The league could package into a 1:30 clip all of the second-half scoring plays. This is basically how highlights already work, but with more of an emphasis on red zone plays and less so defensive plays. Again, all it takes is creativity and a salable product.

There’s so many games and hours of footage on Sunday that no one person can consume them all, not even this author with three televisions going at once.  Sports bettors might pay for this stuff. The same bettors already paying $300 for the NFL Sunday Ticket! Picture Cuban and Jerry Jones:

This is the most important point and one that casinos/sportsbook operators will continue to battle over. In January, sensing and hedging against a SCOTUS defeat, the NBA and MLB locked arms in a lobbying campaign in two dozen states to lock up data, among other things.

One “core” component of the NBA- and MLB-sponsored “model legislation” is, basically, a monopoly on data. This is what the NBA and MLB have submitted as good legislation:

Some legislators have called it a monopoly at hearings in recent months. The leagues could engage in price gouging and if successful, would put some existing data providers out of business. Problem is, data is public domain. A few key cases have decided this, including C.B.C. Distribution v. Major League Baseball in 2006.

There’s some gray area for real-time data. The leagues, now the NFL included, will attempt to get lawmakers to circumvent case law. This could lead to a major antitrust and/or First Amendment case in the future.

The leagues successfully convinced some lawmakers in New York State to include a weird “tiered” data structure in one of its sports betting bills. This is their framework:

Also, does a single source of data even protect integrity, or actually threaten it? In that environment there would be no checks and balances, thus, I submit, a greater risk of manipulation and scandal.

“Running through all of this is the notion of fair use,” Telscher said. “Really, our case was defended on First Amendment grounds. What it all boils down to is, even when you have intellectual property, player names, trademarks, team names…. whenever you have these things, the public is allowed to use them in a fair way without paying you. So, every use of your trademark isn’t compensable.”

Core Principle #4: Law Enforcement Will Have the Resources, Monitoring and Enforcement Tools Necessary to Protect Our Fans and Penalize Bad Actors Here at Home and Abroad.

Meaning: Same response as in #1. All sides can agree on this. But again, let the states allocate their resources and use their “police powers” how they see fit. No state or licensed sportsbook wants to see a fixed game. Murphy v NCAA turned on states’ rights. Does Congress really need to go back down that road?

And, oh, what’s missing from the core principles? That dastardly “integrity fee.” This signals that the NFL is not on board with the NBA’s and MLB’s position there. Does this mean those two leagues (and the PGA Tour) will drop it?

They were most recently handed a defeat in West Virginia, but New York offers promise for a more limited 0.25 percent “integrity fee.” It’s still 0.25 percent more than they can legally demand. I’m not sure where it goes. It’s a bogus, greedy claim for a direct cut by those leagues based on a flawed claim of intellectual property.

However the NFL came to the conclusion to leave it off their platform … good. It will allow all stakeholders to sooner arrive at common ground, either at the state or federal level.

Will Congress Get Involved?

Very difficult to handicap. I’m in agreement with Steve Ruddock of Legal Sports Report that it won’t happen in 2018.

By the middle of 2019, there’s a good chance that about 12 states will have rolled out legal frameworks, setting up clash of state versus federal law. Congress can pre-empt if it wishes.

If something does get done, it probably won’t be through Utah Senator Orrin Hatch, a PASPA co-author and ardent gambling opponent. He is retiring at the end of this year.

If a federal framework does arrive, ironically it will mostly likely come from New Jersey Representative Frank Pallone (NJ-District 6), who is poised to become Chairman of the Energy and Commerce Committee if the House turns blue (looking increasingly likely).

On the day of the Supreme Court oral argument, he formally introduced the GAME Act, “which allows states to legalize sports betting and online gambling if appropriate consumer protections are also in place.  The GAME Act would provide states with the legal framework to adopt sports betting at their discretion.”

“The GAME Act would be a good starting point, but the real key for us is educating our colleagues,” Titus said. “They know very little about gaming, which is a complex issue, and so most of them, if you asked them what PASPA was, I suspect would give you a blank look.”

The Act in its current form would give the Federal Trade Commission regulatory authority. For starters, the FTC probably doesn’t want that responsibility.

Will New Jersey state lawmakers urge Pallone to file the bill away, given the SCOTUS win? Does Congress really want to wrestle with the states over a gaming issue?

I wouldn’t put it past Congress to dive in, but wouldn’t bet on it. The NFL will certainly flex its muscle to try. They were successful in 1992 with PASPA.

Not to Get Lost Here

The fact is that the NFL actually supports sports betting, according to these core principles. Consider what the leagues wrote during a 2002 lawsuit against Delaware, which at the time wanted to reintroduce the NFL parlay wagering lottery that was “grandfathered” under PASPA.