The NFL has never been on the leading edge of societal change, so it's curious to this author how it has handled COVID 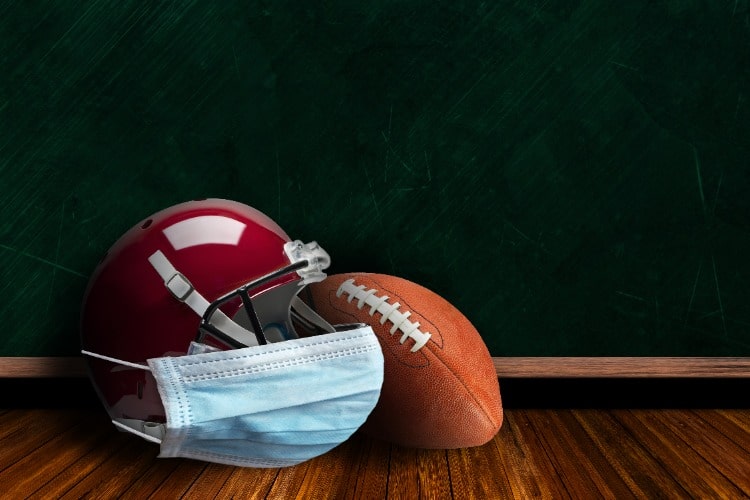 The NFL hasn’t exactly been on the leading edge of the culture wars in America. This is not a new phenomenon; football is generally associated with toughness, grit, anger, violence, and, as my high school gym/sex ed teacher Mr. McPeek put it, a general sense of “when men were men and sheep were scared,” a phrase I was afraid to ask what it meant then and I’m still afraid to Google today. (Complete sidebar unrelated to the rest of this column: How the hell were gym teachers also the people teaching kids about sex? These people took delight in watching dorks get spiked with volleyballs, and I speak from first-hand experience. They weren’t exactly … well, they weren’t exactly the people I’d choose to discuss the intricacies of human sexuality.)

Anyway, from matters of race to matters of sex to matters of equality, the NFL, at best, has been a lagging indicator of the society at-large. The league has not led the way.

Which is why I find it fascinating that the NFL has taken the lead in the biggest culture war of our time: COVID (which obviously shouldn’t be a culture war, but play stupid games, win stupid prizes).

Seriously: While politicians bicker back and forth about mandatory vaccinations in the private sector, and people continue to lose their minds over wearing a mask for two minutes while they shop at the Piggly Wiggly, here’s the NFL laying out simple, effective, and common sense rules for COVID.

Williams & Harris were placed on the COVID list as high-risk close contacts. The close contact traced back to Monday, so both players could play Sunday vs the #Giants if they just continue to test negative. NFL rules state close contacts must be away 5 days from time of contact. https://t.co/R9sONNjoRl

The NFL — whether it’s out of concern for the players and coaches, dollars and cents, or some combination of the two — is simply not playing games with the virus, and realizes the only way to avoid a major outbreak is constant testing and high vaccination rates (reportedly over 95% of players are vaxxed).

Now listen: This isn’t meant to be a screed for or against testing, for or against masking, for or against vaccines. I have my opinion on all that, and I’m guessing where I stand is pretty clear. But it’s not about that. It’s about how the NFL is on the leading edge of testing, tracing, vaccinations, all of it. In this politically fractured country, where everything lately comes down to red or blue, the NFL has to be considered midnight blue when it comes to COVID.

It’s an interesting place to be for a league that has never been accused of being “left” of anything. It almost makes you think we should all — gulp — stop thinking about COVID in political terms if the league where they had to institute a rule to force owners to even consider hiring Black coaches is like, “Oh no, yeah, we’re definitely going to test and quarantine and everything because politicizing a killer virus seems suboptimal.”

But what do I know?

I learned all about sex from a dude in tube socks and those weird football shorts.

Throwback Thursday to almost 40 years ago @JaysFootball The 1980 Liberty football team and coaches. Gotta love those tube socks and shorts those coaches are reppin….just in case you need any ideas for new coaching attire! Excited for the football season to begin! Go Jays! pic.twitter.com/6wnTp5fp9D

First off: weekly reminder that I hit a near +2000 parlay back in Week 7 that guarantees our profitability. Next up: lost last week, obviously, but who cares, this is a forward-thinking column, and so I present to you this +1175 humdinger over at DraftKings: The Washington Football Team getting 4.5 points at home against Dallas, the Ravens getting three points on the road in Cleveland, under 53.5 in the Bills-Bucs battle, and over 49 in the Bengals-49ers tilt.

To be clear: I don’t love this parlay, but I’m contractually obligated to present one here. My rationale: I don’t understand why the Cowboys are favored, period. I don’t understand why the Browns are favored, period. I think the Bills and Buccaneers game could turn defensive. And I think the 49ers and Bengals are just … well, my #analysis here is there’s offensive upside with these two teams, m’kay? Leave me alone and bask in that near +2000 parlay I hit almost two months ago.

.@jeffedelstein is back for #NFLWeek14, except now he's been relegated to the attic, where he actually kinda likes it.

Column here with a bad teaser bet, thoughts on the NFL's COVID plan for protecting the bottom line, and Mr. McPeek.

All righty! Down to 4-9 on this disgusting portion of the program, but really: The headline says it all. I hate teasers.

I did not, but I went 59-1 in my H2H games this week. No joke. Here’s the thing: I rarely play cash games. The only time I play is when I think I stumble into an awesome lineup. Which happened last week, and that lineup scored 196.62 points. So I played it in the Milly Maker (won $80), played it in an 8-man home league (won $72), played it in those H2Hs. But did I play it in higher stakes, smaller field stuff? Of course not. Because I’m scared. I blame Mr. McPeek.

This may be a COVID special situation, and is probably best reserved for small field, high stakes, which I won’t play so I don’t care that I’m giving this away, but … if Keenan Allen and Mike Williams miss, you can play Jalen Guyton, Josh Palmer, and Jared Cook for $9.6K total. Honestly, you can add Justin Herbert and Austin Ekeler to the mix and get pretty much all the Chargers offense and still have enough for three studs. Food for thought.

Outside of COVID plays, how about this: Chuba Hubbard for $5.9K on DraftKings. He’s the same price as DFS darling Javonte Williams and $100 less than fellow DFS darling Antonio Gibson. He’s home, he’s favored, and he’s playing for a team that just fired their offensive coordinator for throwing too much. Seems likely his floor is 20 touches.

Will this be a big fantasy week for Chuba Hubbard? Which superstars could fall short of expectations? Find out as me and @jenpiacenti break down this week's Start Em, Sit Em running backs on @sinow @si_fantasy!

And I’m now 6-7 after a hot start. Moral of the story? I suppose I’m pretty good at identifying dogs early in the season, and really bad at it as the season wears on. Other moral? I should’ve listened to Morten Anderson, who thought I was a moron for backing the Jets in this space last week.

This week, I just have to go back to the WFT getting 4.5 points at home against the Cowboys. Do I think WFT is more talented? I mean, no, probably not, but that’s just too many points. I honestly think if the Dallas Cowboys were called the Jacksonville Jaguars — same players, but not “America’s Team” — the WFT would be favored. Hmmmph. Now I want to study this. Is there a Dallas Cowboys effect in the betting markets? I wonder if it’s the same for the Steelers. Genuinely curious now.

Down to 7-6 as my Morten Andersen-approved Bengals bet crashed and burned. This week — duh — WFT +4.5 all the way, baby.