It's a sad day for the Twitterverse, as we no longer have Meyer to kick around. 'Kick around.' See what we did there? 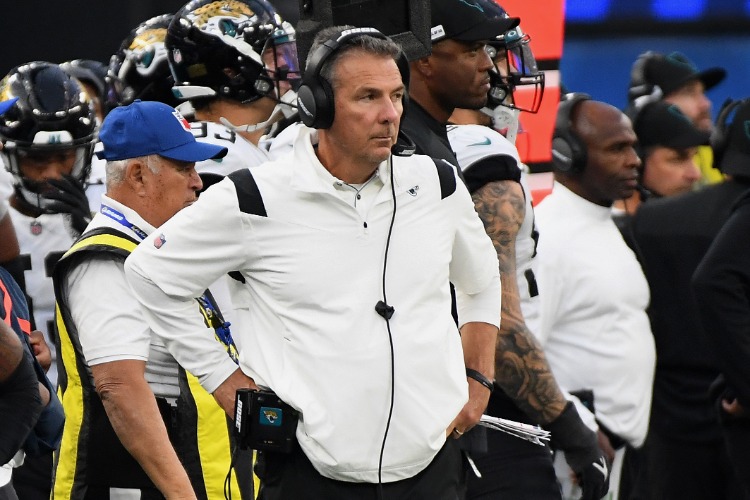 Today, I feel bad for some people, don’t feel bad for one person, and feel great for a whole subsection of our population.

People I feel bad for right now: NFL prognosticators, from sports betting analysts to fantasy football analysts to legitimately anyone who earns their entire living as an NFL watcher. Why? Because trying to preview this week’s slate of games is a fool’s errand, as every single time I check Twitter, another player has entered the protocols. (Sounds so very ominous. The protocols. Well, I mean, I guess it is pretty ominous, this COVID business, but still: The Protocols. Sounds like a movie where Willem Dafoe plays the bad guy.)

Anyway, that’s who I feel bad for right now.

Person I don’t feel bad for right now: Urban Meyer. Boy howdy, was that a disaster or what? The laundry list of misdeeds, scandals, and idiocy is just … well, “awesome” comes to mind.

In February, he hired a strength and conditioning coach from Iowa who was accused of being a racist and a bully. The guy resigned within 48 hours.

In May, Meyer signed Tim Tebow as a tight end. It went exactly as expected.

Best part of the Urban Meyer era in Jacksonville was him trying to make Tim Tebow, tight end, a thing.

This play still cracks me up. Falls down on the block, gets up dizzy, spears his teammate in the chest with his helmet 👨‍🍳😘👌 https://t.co/RvWVPaf8fj pic.twitter.com/GhSwDt9Iid

In July, Meyer was fined $100,000 for holding offseason practices with contact.

In August, Meyer propositioned my wife at a Bar Mitzvah. (OK, fine, I made this one up, but it’s entirely within the realm of possibility.)

In October, Meyer A) didn’t travel back with his team after a loss in Cincinnati; B) went out to his bar and restaurant instead; and C) was videotaped with a young woman, not his wife, grinding on him.

In December, he kept benching James Robinson, which so far is the most inexcusable item on this list. It also surfaced that he yelled at his assistant coaches, calling them losers.

It warms the heart during these trying times of tribalism and divisiveness that we can all come together in the spirit of the holiday season and agree Urban Meyer is a fucking dick. 🎄❤️

In the end, though, it was a kicker that was the final straw.

Talking to the Tampa Bay Times, Josh Lambo recounted a story from training camp this summer when Meyer sidled up to him — after he had missed a pair of field goals in the team’s first two preseason games — and, as Lambo tells it, “I’m in a lunge position. Left leg forward, right leg back. Urban Meyer, while I’m in that stretch position, comes up to me and says, ‘Hey Dips**t, make your f**king kicks!’ And kicks me in the leg.”

Hours after this story went viral, Meyer was canned.

People I feel great for: Kickers! As someone who’s been playing fantasy football since 1986 — here’s a local news story on my home league — I’ve become a kicker whisperer. Basically, I stream them, very successfully. (The recipe isn’t hard: favorites, home team, good weather. Those are the three things I look for.)

Also: In our first draft — and remember, in 1986 fantasy football was not a thing, I was 14, and no one had any idea what they were doing — I selected Tony Franklin, a kicker.

In the first round.

So yeah, I’m a kicker guy. I wish DraftKings and FanDuel would bring them back.

And I’m thrilled it was, in the end, a kicker who did in Urban Meyer, a man I’ve never met but a man on whom I would probably call the police if he rang my doorbell.

Barefoot kicking into Week 15, then …

And here’s your weekly reminder that I hit a near +2000 parlay back in Week 7 that guarantees our profitability, mostly because we lost again last week. But know this: I’ve won a ton of money the last two weeks on player prop parlays that I bet on Saturday or Sunday. So maybe I need to start updating this column with those picks. (FORESHADOWING ALERT!!!) But for now, let’s take some sides and get ‘er done.

And … wow. It’s tough sledding out there. What an ugly week. The highest over/under is 47(!) and that’s in the Lions-Cardinals game, and 30 of those points are headed to the Cards as 13-point road favorites. Yikes.

Furthermore, there are another six games with touchdown or more favorites. Double yikes.

I’m a little paralyzed here, but here’s goes nuthin’: Dolphins giving 9.5 points to the Jets at home, Titans moneyline at -110 over the Steelers, Texans moneyline at +155 over the Jaguars, and Rams giving 4.5 points at home to the Seahawks, all for +1637 at DraftKings.

Rationale: The Dolphins should have zero trouble, the Rams should be giving at least 6.5 (assuming they can field a team), the Titans are a much better coached squad and will figure out a way to win, and … I mean, the Texans and Jaguars should be a coin flip, so I’ll take the big odds.

guy who, when told to "go big or go home", just goes home

I mean, how did I not win the Milly Maker last week? I said to play all of the Chargers cheapies — Jalen Guyton, Josh Palmer, and Jared Cook — for $9.6K. Taken together, they smashed, scoring 44.1 points for a path-to-tourney-winning 4.5x multiplier. And I had them in a lineup with … Travis Kelce and Tyreek Hill, who sported a combined multiplier of 1.08x in a game the Chiefs won 48-9. Come on!

This week … I mean, yikes again. Have you looked at the running back options? When I did my first pass, the only two spots I liked were Eli Mitchell, who has a concussion and a knee injury, and Javonte Williams, who shares a backfield. Legitimately. That was it.

What I’d like to do is play Cooper Kupp, Davante Adams, and Diontae Johnson somehow, hoping some ridiculous value opens up by Sunday.

But you don’t need me to tell you to play those three.

So howsabout … James Robinson for $5.4K. This is purely an “Urban Meyer is gone” play, and hoping that Darrell Bevell decides to give Robinson the ball 25 times. It could happen, and if it does, Robinson should easily 4X his price.

And I’m now 6-8 after a hot start, which is really terrible, as I was 6-3 at one point. Took the WFT last week — which killed me everywhere. Tough to pick dogs later in the season, I reckon.

But my dog of the week is … well, the Texans, I guess. Of course, they’re terrible, but nobody should be getting 4.5 points against the Jags.

I am on fire in the player props department. Cashed my Cam Newtown anytime TD at -115 on BetMGM (and I got it at +160 when Caesars dropped the line), Alvin Kamara over 107.5 rushing/receiving yards, and CeeDee Lamb over 5.5 receptions.

In this space, I’m 11-1 over the last month, and remember, I’m picking these props early Friday morning. By Saturday morning, there’s probably 20 times the amount to choose from.

So yes. I’m a player prop maven. I cannot be stopped. (I am so about to be stopped.)

Another three-pack, all from DraftKings, all picked Friday a.m.:

Yeah. Zippo. I suppose it’s COVID related, but there are virtually no player props posted as of Friday morning. I’ll come back to this Saturday.

Down to 7-7 now with my WFT +4.5 pick that died within about three seconds after kickoff. This week, I’m going with the Rams giving 4.5 points, provided they get some of their COVID players back on the field. But even still: I don’t understand that line.