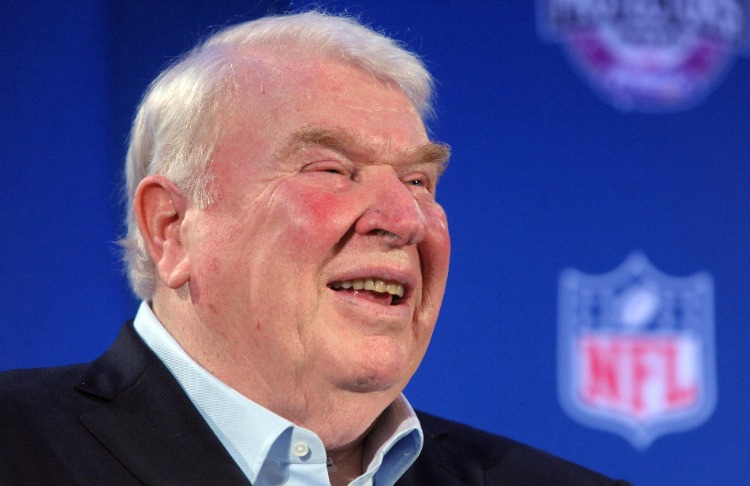 But I was right in the sweet spot to remember John Madden as the voice of Sunday afternoon football.

Baseball was my main sport – I would watch any and every game on TV, would play Strat-O-Matic baseball until my eyes fell out, would read every box score every morning. I was nuts. This all started in 1979.

Football came late to the party. I vaguely remember the Eagles-Raiders Super Bowl, but I distinctly remember the 1981 season, which ended with me literally crying after the Richard Todd-led Jets lost in the wild card round to the Buffalo Bills.

So yeah: If I was crying over the Jets, you can say for certain I was a pretty big sports fan.

As the years ticked by, my allegiance shifted to the Giants – I may have been a bit of a frontrunner – and Madden and Summerall were basically the voice of the Giants, as the team was often the “game of the week” for CBS.

Of course, this was a more innocent time for me, as I was just a fan. There was no betting, and while I did start playing fantasy football in 1986, it didn’t interfere with my love for the G-Men.

I just watched the games to watch the games, and Madden – who I can’t believe was five years younger than I am now in 1981, especially considering that, to me, he was an old man then (which means I’m old, holy sh … I need a moment) – was the announcer.

Honestly, he and Summerall felt like my football uncles. They’d pop in on Sunday afternoons, we’d have a few laughs, watch some football together, and then we’d do it again the next week.

Along with Brent Musburger’s “you are looking live” bit, my NFL memories run through the television, and Madden was a monster part of it.

The guy was basically the voice of my childhood for 20 weeks out of the year.

Well that was a close one. We had a +2625 one that was cooking. The Rams covered, the Lions covered, the Bengals covered, and the Colts topped the Cardinals. All we needed was the Dallas-WFT game to go under 47.5 points.

It didn’t, as the Cowboys pasted the nameless wonders 56-14.

Worst part about this, however, was the process was spot-on. This is what I wrote last week concerning this game: “The Cowboys are winning with defense, and might shut out the WFT.” And that’s where the bet came from. And I was right: Dallas scored two defensive touchdowns, and romped their way to victory. I was hoping for a 40-0 score.

Process, of course, doesn’t pay the bills. (What does was that near-+2000 parlay we won, oh, about two months ago, but still, it keeps us in the green for the year.)

This week? Well, again, I’m writing this early due to the holiday, so COVID may still rear its ugly head, but as of Wednesday morning, this is where I’m at, placed at DraftKings: Over 50 in the Kansas City-Cincinnati game, the Eagles giving 3.5 points to the WFT, over 37.5 points in the Bears-Giants game, the Texans getting 13 points against the 49ers, the Cowboys giving 5.5 points against the Cardinals, and over 43 in the Seahawks-Lions game.

Rationale? The Chiefs and Bengals might go toe-to-toe in this one … The Eagles are just better than the 3.5 points … The 37.5 points in the Bears-Giants game is just too low to not bet … The Texans are feisty, and Trey Lance is bound to make a few mistakes … The Cowboys are peaking, the Cardinals are flailing … And the Seahawks, well, this very well might be Russell Wilson’s last home game in Seattle. I think things might get wacky.

Finally won one last week, bringing our (well, my) record “up” to 5-11. Back to Caesars and its +160 standard, where I’m going with the Bears pick ‘em over the Giants, the Seahawks giving a point against the Lions, and the Cowboys getting a half-point against the Cardinals.

No, but I booked a profitable week and again went nuts in cash, going 33-7, bringing this unsustainable four-week run to 170-31. Yay for me.

Also … I somehow snuck my way into the Underdog Best Ball Mania II final. I only need to beat 159 people to win a million dollars. What could go wrong?

Most of the chalk hit except for the now-injured James Robinson, and my play of the week – Clyde Edwards-Helaire – was going along just fine until he got hurt, so … whaddya gonna do?

This week? Well, for starters, happy Trey Lance Week everyone, where at $4.8K he seems like a cash – and probably tournament – lock.

But I’m looking somewhere else for my super-sneaky stack of the week: rainy and cold Seattle. So give me Russ with D.K. Metcalf and Tyler Lockett with Amon-Ra “Cooper Kupp North” St. Brown as the bringback.

Listen: As I mentioned earlier, this might be Wilson’s last home game as a Seahawk. This game means nothing, other than that. Would it be so shocking for Wilson to deliver a going-away present? Definitely building some Milly Maker teams with this in mind at what will probably be sub-20% ownership combined on these four players.

Got greedy and took the Lions outright last week. If I just took the points, I’d be back to .500. Instead, I’m at 7-9. This week, I’m going with the Texans getting 13 points in San Francisco. The Texans have been playing hard, and nearly two touchdowns against a rookie quarterback seems like too much.

Finally ran up against the brick wall last week, going 1-2, but my two losses involved Miles Sanders and James Robinson, both of whom left early due to injuries. Sigh. Still, I’m 15-3 over the last six weeks.

Check back here Sunday morning for my picks.

Up to 9-7 as the Rams covered in Minnesota. This week, give me the Cowboys laying the 5.5 at home against the Cardinals. Two teams going in very different directions right now.