There have been surprises aplenty these first two weeks, and I'd like that to stop immediately so I can start winning money 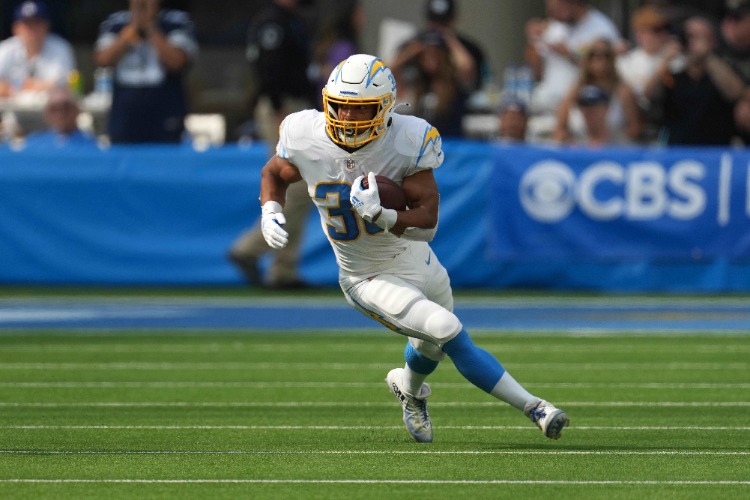 I’m a near-100% tournament player, so of course there are going to be bad weeks. But even in my bad weeks, I usually stumble into a few lineups that cash and that make me feel halfway decent about the oft-repeated “process.”

This past week, though? Just a disaster.

Been playing DFS since 2014. Yesterday was the worst day I've ever had. I am in max pain. https://t.co/4SwaFkwSCn

So what gives? For Levitan (and me), maybe we can blame Drew Silva, brother of Evan Silva, who went and got married and thus took Silva and his insights off the field for the weekend. (Half-joking.)

But, really, what happened? Why the “max pain?”

Rotogrinders’ own Brit Devine offered some food for thought, noting total combined ownership for the top finishers in the DraftKings Milly Maker contests have been exceedingly small in the first two weeks of the season.

Do we suck now, or is the NFL different from last year? https://t.co/K6rTn7cxk9

Devine’s questions at the bottom of his tweet — “Do we suck now, or is the NFL different from last year?” — are really the questions du jour heading into semaine trois. And I think I have an answer to both, at least for now: no and no. I’m going to side with another word DFS players love to use: variance.

Much like weed smokers are the only people on earth who use the word “partake,” DFS players are very fond of the word “variance.” Take the root word “vary” back to its Latin roots — varius, meaning “diverse” — and you start to get the picture. While we can read game previews and crunch numbers and analyticize the hell out of every data point that comes down the pike, the fact remains that these are human beings playing a game where their actions are but a small part of a larger whole and, for the love of Elway, how the hell did K.J. Hamler only catch one ball for five yards? And don’t even talk to me about Tyler Higbee.

Things happen, in other words. Results are going to be … diverse.

While results will certainly be diverse, by the time the end of the season rolls around, things are going to look pretty much the way they always look: a few surprises, a few duds, and most everything else falling in the “yeah, that sounds about right” category.

In the meantime, onward and upward to Week 3, where I’m trusting the process, embracing variance, and hopefully regressing my own damn self to the mean. (Also, treating Clyde Edwards-Helaire’s $4.8K salary on DraftKings as kryptonite. And there is a 100% chance a quarter of my lineups feature Helaire.)

And now, on with the show.

I’m 0-for-2 so far with these things, but that’s fine, as I just have to hit two over the course of the entire season to show a profit. This week, I’m going big in an effort to only have to win once to be wildly profitable (bet was placed Thursday at DraftKings): Over 46 in the WFT-Buffalo Bills game, under 45.5 in the Miami Dolphins-Las Vegas Raiders tilt, over 47.5 in the Atlanta Falcons-New York Giants game, the Los Angeles Chargers outright over the Kansas City Chiefs, and the Chicago Bears +7 against the Cleveland Browns.

All told, that’s a +6025 payday, er, parlay, and I can confidently look at these games and feel like I’m right.

The WFT defense is not playing well, and the Bills could put up five touchdowns all by their lonesome. The Raiders defense has been playing very well, and the Dolphins have looked not good. The Falcons and Giants can ugly their way to 65 points, and the Chargers might actually be the better team, full stop. And, come on, you want me to bet against Justin Fields in his first NFL start? Please.

This week, it’s back to FanDuel, where I again expect to lose. (It’s weird, as I have much more conviction in my parlays than my teasers. Another in a long line of gambler’s fallacies.)

But I will this week.

Bottom line? I feel like all these affordable wideouts really muddy the waters. I assume Kupp will be super-chalk, and he’s a scary fade against the Buccaneers.

But when it’s all said and done, I think my play of the week is going to be at the quarterback position with Justin Fields at $5.2K. He has legitimate Lamar Jackson-like upside, and probably won’t be high-owned, with Teddy Bridgewater and Daniel Jones in great matchups lurking just above. A Fields-ARob stack, bringing it back with a potentially healthy Odell Beckham Jr. will be low-owned, inexpensive, and theoretically explosive. (By the way, I nailed Mike Evans last week, but whiffed on K.J. Hamler.)

Two for two here, having taken the Rams in Week 1 and the Browns in Week 2. In keeping with the spirit of the game, those two are out of my potential pool, so this week, gimme the Broncos. No-brainer.

Far as I can tell, DraftKings is owning it again this week, giving 20% boosts across the board on each game. You can use it for whatever you want. Hard to pass that up. And if you’re looking for a little free scharole, you can match these boosts up with PointsBet, where it’s another no juice spread week. For instance, you can take the Bills -7.5 at +100 on PointsBet and match it with the WFT at +7.5 boosted to +109 (limit is $50) on DraftKings and pocket yourself two bucks and change. Do that 15 times, and you’ve got about $30. No one said I was going to make you rich, OK?

Apparently, this is where I butter my bread, as I’ve been right both times, taking the Cincinnati Bengals against the Minnesota Vikings in Week 1 and the Ravens last week against the Chiefs.

This week, I’m going back to my parlay pick: I really like the Chargers against the Chiefs. The -6.5 spread everywhere, from Caesars to WynnBet, feels way too big for me. I’m not ready to bury the Chiefs, but I think the Chargers are ready to explode.

I got destroyed last week again, taking the over on Dak Prescott pass attempts at 39.5.

Gonna try and reel it in again this week, and the biggest gimme (read: not a gimme) I see on the board is Austin Ekeler over 98.5 combined rushing and receiving yards on DraftKings at -115. I’m really leaning into the Chargers this week, and this feels like an explosion spot for Ekeler, win or lose.

Hey, guess what? I’ve lost you all your money the first two weeks of the season, so this week I highly recommend stealing your mother’s jewelry and pawning it in order to get down a bazillion dollars on the over in the Buffalo-WFT game. Last I checked, you could get over 45.5 at +100 on FOX Bet. Run, don’t walk.