NFL Week 5, But First: All The Tua Hand-Wringing Is A Little Disingenuous

Of course we need to do more to protect athletes, but let's not pretend every snap of the NFL isn't Russian roulette 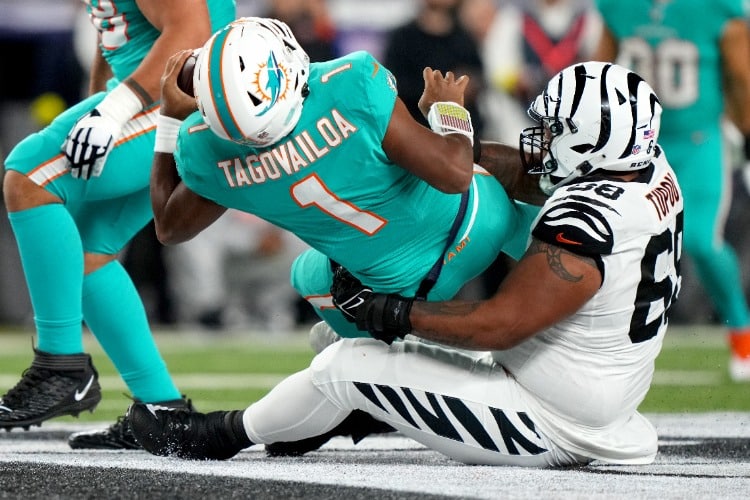 When we log on to our favorite sportsbooks and place a wager on the NFL, we are tacitly approving of the fact the people we are betting on are putting their heads — more or less literally — on the line for our entertainment.

I’m not saying this in a “wag my finger” kind of way. This is just, very simply, a fact.

Of course, when watching an NFL game, we rarely think about the dangers until we’re faced with it. And if you were watching the Dolphins-Bengals game last week, boy were you ever faced with it. Tua Tagovailoa — four days after crumbling to the field and then being allowed to continue to play — got sacked. His head hit the ground. And then his fingers froze. It was scary.

Now: Should Tua — who has reached Madonna-like levels of first-nameness — have even been on the field following what happened to him days earlier?

This is what happened to Tua Tagovailoa after his head hit the turf hard. Not sure how you let him back in.

I mean … no. Hindsight is 20/20 and all, but really, how the NFL and the Dolphins allowed him back in that game to begin with is crazy, and how they let him play days later seems even crazier.

The bottom line regarding Tua is LIFE is bigger than football. Teams should always put the person before the player. Health before competitive advantage.
Putting Tua out there isn’t just a player safety issue. It’s a quality of life issue.

Plenty of well-deserved hand-wringing about all this.

I mean, Tua is out this week (side note — between now and Sunday, Tua could learn Latin, recite pi to the millionth number, have a clean brain scan, and create sentient life from a box of popsicle sticks and some manganese, and the NFL would still insist he take the week off), but it’s not stopping any of us from putting in a fantasy free agent bid on Teddy Bridgewater.

It’s OK because we have entered into a deal with our own brains, and that deal is simply this: As long as the combatants are OK risking their life and limb for our entertainment dollar, we are happy to spend our money to be entertained.

I don’t mean to be all #nihilist about this, but really: Our culture — and, what, every other culture since the dawn of human civilization? — is not particularly put off by violence as entertainment. Call it a bug in the system, say we’re all sick in the head, whatever. But it’s just a fact.

Football is beautiful. It’s the chess of sports. One player’s actions and movements can set off a cascade of events that can yield a three-yard loss or an 80-yard touchdown. It’s glorious.

It also features gameplay that would result in criminal charges on nearly every single down should they happen on the street instead of the field. (And boxing and MMA, the same but even more, obviously.)

Should the NFL be more careful about letting injured players play? Of course. But just by virtue of the game itself existing, we’re allowing for, and expecting, violent injuries, specifically brain injuries.

A study hyped by the Concussion Legacy Foundation — and headed up by Harvard University docs — showed that contact sport athletes are 68(!) times more likely to develop CTE compared to people who didn’t play contact sports.

So yeah: We need to do more to protect athletes (duh). But in the meantime, all of the Tua hand-wringing seems a little disingenuous to me. Every snap of the football is, objectively speaking, dangerous and likely causing harm.

But … whatever? I mean, it’s really hard not be #nihilist about all this and still enjoy it.

This is exactly how Miami did tua 😭🤕😭 pic.twitter.com/UiQOOrqkvK

And we’re now 0-4. Our +1323 longshot was commandeered (get it?) by the Commanders, as they didn’t cover. (Back slap for getting the Eagles giving the points and the Patriots getting the points, however.)

This week is tough. I guessed the lines, and was within a point on ten of them. Not a lot of screaming value to me.

So let’s just throw some stuff against the wall and hope it sticks. (Do I need to remind you I’m not an official NFL analyst?)

Let’s go to BetMGM (using odds as of Monday morning) and mash together four big favorites, because what can go wrong? The Bills -13.5 over the Steelers, the Jaguars -7 over the Texans, the Vikings -7 over the Bears, and the Eagles -5.5 over the Cardinals for a +1230 shot in the dark.

Rationale: The Bills, Jaguars, and Vikings are playing the Steelers, Texans, and Bears at home. That’s good enough for me. As for the Eagles giving 5.5 on the road … well, the Eagles are the premier team in the NFL right now, so there ya go.

I’m down to 1-3 as a result of their Monday night loss, and so this week I’m keeping it tight to the vest. At Caesars, give me the Packers -2 over the Giants, and I’ll double down with the Jaguars and Vikings, both down to -1.

I’m down to 2-2 here, as I deemed Miami getting three points at Cincinnati fishy, but the Fish couldn’t cover so the only fish here is me.

This week’s fishiness belongs to the Bucs giving 8.5 points at home to Atlanta. Now I know Tampa has been struggling, but everyone is getting healthy and they put 31 points up this week and Marcus Mariota ain’t Patrick Mahomes and … and I think the Bucs might have a statement game coming.

I really, truly, do not want to talk about this. Having a disastrous run. Send help. This is an emergency.

Welp, last week my advice was to fade the Bills-Ravens game. I said this pre-weather concerns, but the reasoning was sound: because everyone was staring at the game.

Of course, if you didn’t stack up the Lions and Seahawks with an Austin Ekeler chaser, you were toast.

And, heck, even if you did, you still needed to hit everything. My best lineup included Geno Smith, Jamaal Williams, T.J. Hockenson, Tyler Lockett, and Ekeler – and it still scored only 172.20 points, as Khalil Herbert was meh, Drake London and Amari Cooper combined for 5.6 points, and my Broncos defense scored two points. Blecch.

This week, pricing is as tight as its been all year on DraftKings.

It’s going to be hard to pay for quarterbacks, and cheap value — as of now — is non-existent.

Even the value that opened up because of injury is ugly. You want to play a Falcons running back against the Bucs? Dyami Brown against anyone?

Truthfully, it’s tight out there. Balanced builds are clearly going to be popular. So I suppose the advice here is … pay up in some tourney lineups. It’s going to be next to impossible to comfortably fit in Cooper Kupp at $9.6K, for example. No one is paying $8.5K for Christian McCaffrey against the 49ers.

Of course, this means you’re going to have to gamble with low-cost wideouts or dare I say a two-TE build.

The Eagles got me to 2-2 last week, and I’m going right back to the well. Gimme the Birds giving 5.5 points to the Cards.