The Jets and Giants, two of the biggest surprises in the 2022 season, look to continue their hot starts 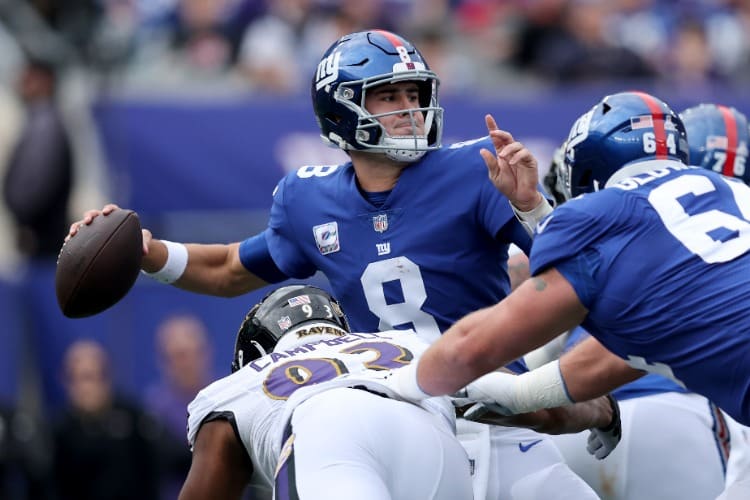 Let’s have a short discussion about conviction.

First, let’s go to Webster’s for a dictionary definition …

CONVICTION: noun; a firmly held position in sports betting that you only have when you’re wrong, and never when you’re right, damn it all to hell.

Seriously: Assuming you’re not a professional NFL sports bettor, you know what I’m talking about. Basically, if you’re a pro, then you only bet on numbers and value. That’s it. If you’re anything like me, you glance at numbers, pretend you understand value, but in the end, pretty much bet on “feel.”

And for the second week in a row, my “feel” paid off. Feelings, man. So important.

a man actually admitting his feelings is attractive asf

This time it was a three-team moneyline parlay that I placed Sunday at 8:25 a.m. I had the week to digest everything that I consider my research, and I felt strong enough to place the bet.

Anyway, the bet was a +3381 parlay, placed on FanDuel. The three legs were:

1) Falcons +188 over the 49ers: Why did I like this game? Because A) the Falcons defense had been tough so far this year, B) they were home C) the Falcons were 5-0 against the spread and D) clearly the oddsmakers thought they had a chance, as they were only getting 4.5 points, and it seemed like it should be higher.

2) Giants +210 over the Ravens: I wasn’t thinking about this game at all, but the light turned on with the constant drumbeat of “Wink Martindale knows Lamar Jackson inside and out and will contain him.” That, along with the Giants being at home and Brian Daboll seemingly being able to make Kool-Aid out of Daniel Jones (too soon?), and there you go.

3) Jets +290 over the Packers: This I was already on, liking the Jets and the points, noting that Aaron Rodgers just doesn’t seem into it. And as the week wore on, I started realizing the Jets were a better team, period.

So yes. I had this parlay. A monster. And I really thought it had a chance.

Now granted: I am not a big bettor. For me, $100 would be considered a big bet. But $5? That’s just dumb. After all, I had conviction. I had so much conviction I even told my buddy Tommy about it. On the phone. That’s right, I reached out and touched someone because I liked this bet so much. (Sidenote: Can you even believe “reach out and touch someone” was a legitimate tagline to anything other than a commercial for white panel vans?)

Because the bet felt stupid. After all, betting on a three team all-underdog parlay is not normally a sign of intelligence, right? Despite my “conviction,” I let my brain overrule my gut.

This also happens to me about once a year in DFS. I’ll put a lineup together that just “feels” right. I know that’s not how we’re supposed to do things, but I’m not kidding — my stomach gets flippy. I just know it’s the right lineup.

And what do I do with it? I enter it in one large-field tourney and don’t go whole hog with it, and it will 10X in the Milly Maker and would’ve crushed in small field and I mope about it for weeks.

So yes. New rule in my house: If the conviction is there, don’t let your better judgment get in the way. Especially if you’re a dolt like me who allows himself to “feel” things when it comes to gambling.

On to Week 7, where I’m sure my “convictions” are going to splatter like a dropped egg.

Yeah, what can I say. Doing this column so early in the week is not paying off. Lost my pick here last week. Had the Jets and the points and the Seahawks and the points, but lost the Bucs giving 8 and the over in the Chiefs-Bills game (something else I turned against as the week wore on, ugh).

Rationale: The Cards are broken, the Giants and Jets are just objectively better than the Jaguars and the Broncos, and at this point, I’m not sure I’m ready to give 10 points with Grandpa Brady against anyone.

Down to 1-5, got destroyed, I stink at teasers, let’s run it back at Caesars. The first two legs are legit no-brainers to me. Give me the Giants and the Jets, both getting 9 points. Third leg for my +160 teaser is … Patriots at home giving 1.5 points against the Bears.

Brought the record up to 3-3 here by backing the Patriots, who I said I “loved” in this space last week, and who I bet the sum total of $0.00 on (See: Conviction).

This week’s fishy play is the Bengals giving only 6 points against my now-beloved Atlanta Falcons. The Bengals are home, it appears as if they’re starting to get over the Super Bowl hangover, and Joe Burrow has his swag back. Yes, I know the Falcons are now 6-0 against the spread, but gosh, I feel like the Bengals should be giving 7.5 here.

This is shaping up as the most interesting DFS slate of the year so far. Why? For starters, no Josh Allen or Jalen Hurts, and Lamar Jackson has been struggling, with three straight weeks under 18.1 points. Patrick Mahomes is in San Francisco. Justin Herbert might be chalky, at home against Seattle, but he’s had one week over 24 points. In short: Quarterback is wide open.

Running back? Nothing is jumping out as a must-play at this point of the week, unlike last week, where there were (checks notes) 379 viable plays at the position.

And tight end is Travis Kelce, Mark Andrews, and the rest.

My plays of the week for now? The Panthers defense at home against the Bucs for $2.3K. Kenneth Walker III against the Chargers for $5.8K. Bengals stack against the Falcons with a Kyle Pitts bringback, heaven help me. Good luck.

Lost the over in the Bills-Chiefs, so down to 2-4. Gimme the Patriots giving the 7.5 on Monday night. Boom.