NFL Week 9: Time To Listen To My Gut, For I Am The Parlay King

It would've been better if my parlay picks were actually printed here, but such is life 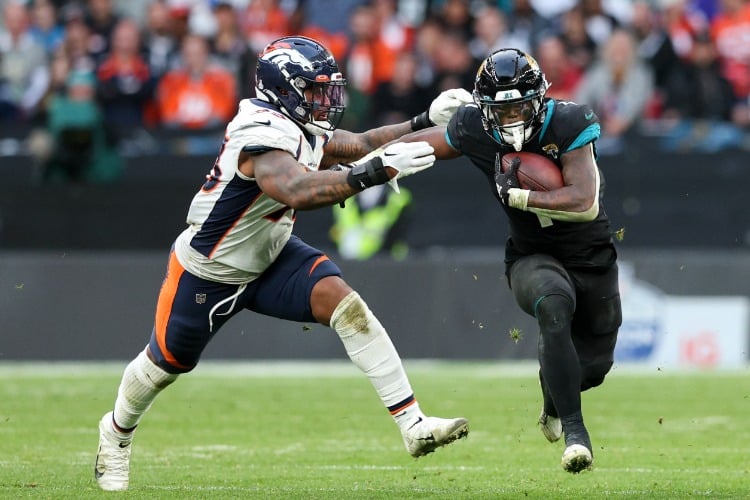 I can’t win for trying.

Last week, we moved this NFL betting column/ego booster/sheer nonsense back to its original Friday home because my late-week bets were proving much more profitable than my early-week bets. In fact, over the course of the season thus far, I had hit two huge parlays placed late in the week. 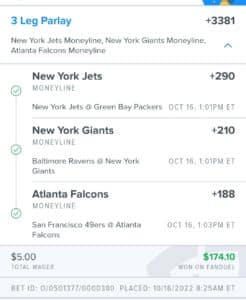 So we decided to move the column. And … I hit a big parlay that I placed on Monday, Oct. 24.

It would have been my +1000 or more parlay of the week if I’d kept the column in its Tuesday home. But as the week wore on, I didn’t like the play as much. But it won, at +2439. It was the Ravens -1.5 over the Bucs, the Dolphins -3 over the Lions, the Panthers +6 over the Falcons, the Saints +1.5 over the Raiders, and the Titans -2 over the Texans. To be fair, I cashed this out at +2298 late in the Titans game because my DFS game was not great last week, and the idea of a last-minute Texans comeback made me sweat.

This is the third massive parlay I’ve hit this year, and none of them have been printed here. I’m stupid, because being that this is for a website instead of fixed in print, I could just go back and add my picks as the week wears on, and I’d have definitive proof that I’m a parlay maven. As it stands, however, you’ll just have to take my word for it. 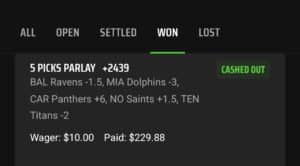 For the record, the game I moved off as the week progressed was Raiders-Saints. I liked the Saints early in the week but moved off them by the time kickoff rolled around. Moved so far off them that I had either Josh Jacobs or Davante Adams in nearly every GPP lineup I built.

I’m saying all this to kind of brag, but more importantly because as the season moves on, I think it’s becoming increasingly important to listen to your gut. If you’ve been following the league closely, you should have a good feel for what’s what at this point. Gut reactions have legitimate merit at this point in the year. I truly believe that.

Let’s hope so, at least, because outside of those three parlays I’ve hit, it’s been a disastrous betting year so far for yours truly. Let’s turn it around, shall we?

Yeah, I lost all three legs of the one I gave you instead of the one I bet early in the week, so let’s just move on, m’kay?

This week, how’s this one look at DraftKings: It’s a three-team underdog moneyline special. What could go wrong? Gimme the Seahawks over the Cardinals at +110, the Falcons over the Chargers at +145, and the Lions over the Packers at +155 for a +1211 total.

Rationale? Well, are we sure the Seahawks aren’t the second-best team in the NFC? Are we sure the Chargers are actually, you know, capable of winning games, especially on the road against a pesky Falcons squad and without Mike Williams and almost certainly Keenan Allen? And are we sure Aaron Rodgers wouldn’t rather be drinking some ayahuasca tea?

Aaron Rodgers at home tonight after taking every drug known to man and forgetting the Packers even exist pic.twitter.com/4CVqQ6FSAh

I lost. I’m down to 1-7. This is embarrassing. Let’s head to Caesars Sportsbook for some more embarrassment. I’ll take the Patriots getting half a point at home against the Colts, the Rams getting 9 points in Tampa, and the Chiefs giving 6.5 points to the Titans at home. The Patriots because they should win, the Chiefs because they’re home and should be able to throw the ball at will, and the Rams solely because there’s no way the Bucs are beating anyone by nine points.

My record fell to 4-4 last week as I backed the Steelers(!) and the points against the Eagles. This week’s fishy line comes courtesy of FanDuel. It’s the Bills giving 12.5 points to the Jets at the Meadowlands. Um … no. The Bills should be 21-point favorites. The Jets are without Breece Hall and with Zach Wilson. In short, this ain’t the same Jets team from a few weeks ago. Add in the Bills always keeping their foot on the gas, and especially so this year after toppling Kansas City. They want that first-round bye. The Bills are going to crush here.

We’re setting up for another chalky week at running back, as DraftKings’ pricing algorithm continues to be terrible. Travis Etienne Jr. at $6.3K, Rhamondre Stevenson at $6.2K, and Kenneth Walker III at $6.2K all figure to be very popular. I think going up to Joe Mixon at $6.5K will be contrarian and, in the same game, I don’t think D’Onta Foreman — despite his great week last week — will be all that popular at $6K.

At the top of the list is Austin Ekeler at $8.8K. Three out of his last four games were over 34.9 DK points. Yowza.

At wideout, I love Amon-Ra St. Brown at a $6.6K price tag. He might get 20 targets. I almost feel the same about Chris Godwin at $6.2K against the Rams.

My mortal locks are dead. Down to 2-6. Give me the Bills laying the 12.5. We’re about to finish this season with fire emojis. LFG.