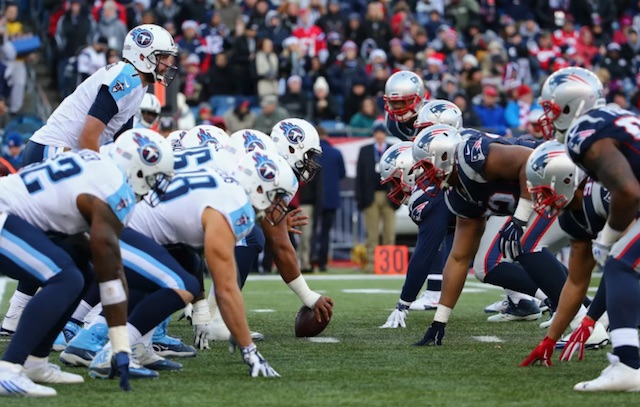 NFL Wild Card Weekend lived up to its name on Saturday and Sunday as all four road underdogs covered and both ‘dogs won straight up on Saturday at +250 or higher on the money line. The game unders hit comfortably twice and Titans RB Derrick Henry led all rushers by far, carrying 23 times for 156 yards.

The TPS report pegged the Titans to cover but missed the spread on the others, while correctly picking the totals in three of four games. Let’s dig deeper into the numbers and outside the box scores and take an early look at the Divisional Round lines.

What happened: This game looked headed toward a Chiefs blowout when Kansas City executed a 9-play, 79-yard two-minute drill that ended with a 14-yard touchdown strike from Alex Smith to Demarcus Robinson with three ticks left in the first half, pulling ahead 21-3. The Titans completely flipped the script in the second half, scoring a touchdown on all three of its possessions, limiting a Travis Kelce-less (concussion) Kansas City offense to just 20 total offensive plays and 56 total yards. And oh yeah, Marcus Mariota threw a momentum-changing touchdown to Marcus Mariota. Titans cover and barely went under at 22-21.

Mariota really did throw a touchdown to himself, in the playoffs pic.twitter.com/hv1B0midRg

What’s next: The Titans head to Foxborough where the (possibly fractured) No. 1-seeded Patriots opened a 13.5-point favorite (where the line remains) over the No. 5-seeded visitors. This feels similar to last year when the NFC South champion Texans made the trip as 15-point underdogs.

In that contest the Patriots came out a bit flat against the Brock Osweiler-led Texans (and J.J. Watt-less defense). Houston had a chance to tie down 24-16 in the fourth quarter but the Patriots (as ever) managed to cover 34-16 thanks to a late field goal. It’s usually unwise to bet against the Patriots. 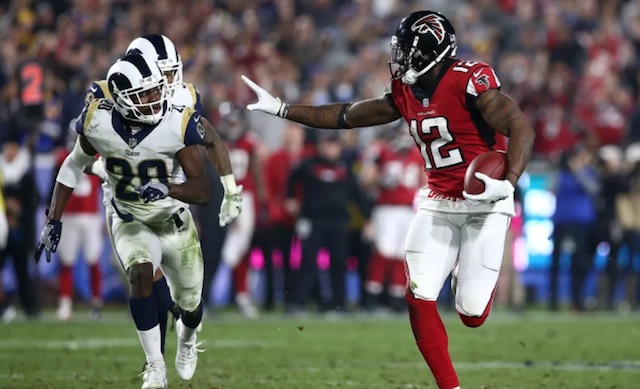 What happened:  The Falcons absolutely dominated time of possession (37:35 to 22:25) and shut down the Rams’ league-leading scoring offense. The Rams’ first four possessions resulted in four punts and 49 total yards plus a muffed punt by Pharoah Cooper, who didn’t have a clean catch on a punt all day. Despite Aaron Donald’s dominance up front, the Falcons controlled the game from start to finish and are peaking at the right time, thanks in part to calm from last year’s run against their jittery opponent. Easy under.

What’s next: Atlanta is on to Philadelphia  as a 2.5-point favorite — the first time a road team has ever been a favored in the Divisional Round against a No. 1 seed. Obviously folks don’t have much faith in an Eagles offense led by immobile backup QB Nick Foles. The line is juiced up at -125 or -120 (depending on your book) if you want 3 on the home dog. If the juice comes down I think we’ll see action on the Eagles at +3 (and it would get pounded at 3.5). Almost all the early money is on Atlanta, per William Hill.

What happened: LeSean McCoy showed little signs of an ankle injury, bursting for 119 rushing and receiving yards and against a stout Jaguars defense. Pretty impressive considering the Bills have zero passing offense. Jags QB Blake Bortles showed no passing touch whatsoever, missing several open receivers, but deserves credit for keeping the offense alive with crucial runs, actually leading all rushers with 88 yards on 10 carries. Bills covered in a 10-3 loss in a total that comically finished at one-third the 39 total.

What’s next: The Jaguars (+7.5) head back to the No. 2-seeded Steelers, whom Jacksonville destroyed 30-9 in Week 5 at Pittsburgh. In that game, Ben Roethlisberger tossed a career-worst five interceptions (two pick-sixes) on 55 attempts in a game in which Bortles attempted just 14 passes. The Bills kept the box stacked against Jacksonville and that’s likely to be the Steelers’ formula. This one opened at Steelers -7 before moving out to 7.5. There’s sure to be lots of Steelers teasers out there. I don’t have a lean yet but if forced to pick, would look at the Jaguars for the first half in game in which the Steelers could come out flat against a loosened-up Jags team in a game few expect them to win. 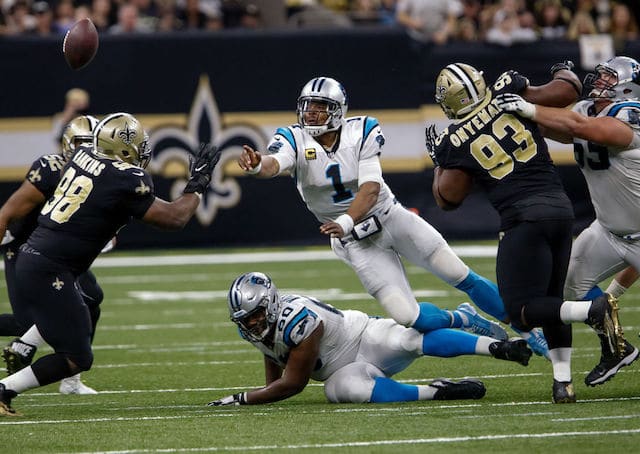 What happened: The Panthers managed just three field goals on five first half drives (one FG miss), three of those drives for 54 yards or more. But after a late 56-yard run and catch touchdown from Cam Newton to Christian McCaffrey, Carolina got the ball back with just under two minutes down 31-26 before the game ended on an intentional grounding and then a sack. The total sailed over and the last road dog sealed a cover.

What’s next: The Saints head north to the No. 2-seeded Minnesota Vikings as 4-point underdogs. The Vikings were 6-2 against-the-spread home this year with an average ATS margin (amount of points that the team covers the spread by) of +7.9. I don’t think they’ll coast by a huge margin but the Saints have got to get that rushing game going (after a brutal 19 rushes for 51 yards combined between Mark Ingram and Alvin Kamara) against a very balanced, No. 1-ranked defense that will benefit from a raucous home crowd. Lean Vikings.

Check back on Friday for the full breakdown in the TPS Report.

Also Check out from SportsHandle:

Vegas Legend Dave Cokin Joins ‘The Hedge: Why I Gamble With Jimmy Shapiro’