Stance may strike some as heavy-handed, but the league appears to be taking a responsible approach

by Matt Rybaltowski
in Opinion 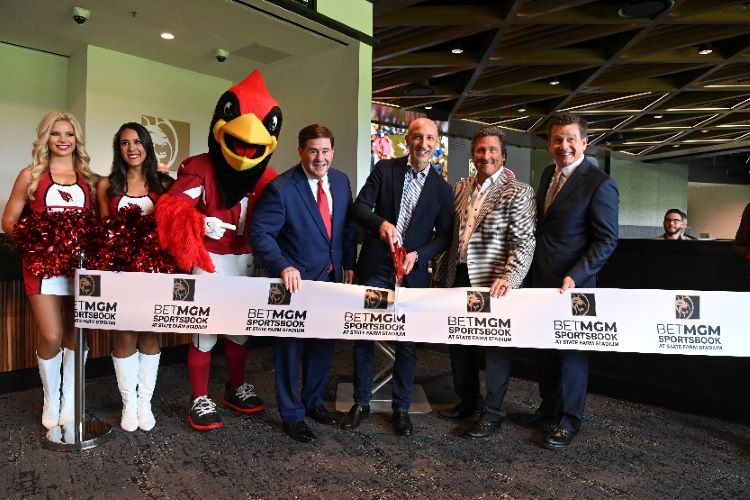 On the day that members of the Los Angeles Rams received their Super Bowl rings in an ornate pre-game ceremony, the Arizona Cardinals made a bit of history of their own Thursday.

BetMGM and the Cardinals opened the BetMGM Sportsbook At State Farm Stadium, a two-story, 17,000-square-foot facility with a host of sports wagering amenities, a gourmet bar and grill, and a variety of large-screen TVs. The facility is the first retail sportsbook to launch at an NFL stadium, according to the team and BetMGM.

The much-ballyhooed debut comes with an asterisk. The sportsbook is located in The Great Lawn, a sprawling tailgating and entertainment area with eight acres of manicured green space and a stage for pregame concerts. The Great Lawn is a separate, detached area from the physical stadium, with the closest entrance located about 0.3 miles away. The lawn is even considered to be a non-ticketed area.

When the Cardinals host the Chiefs Sunday in the team’s home opener, the sportsbook is scheduled to open its doors at 7 a.m. local time and remain open through the completion of the game. The facility will close for the night at 11 p.m., an MGM spokesman said, long after the completion of the Bucs-Cowboys Sunday night game. 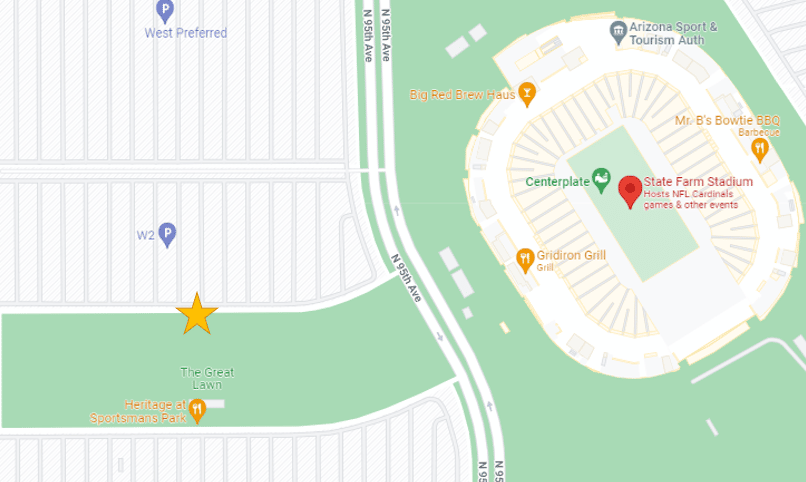 The opening of the BetMGM brick-and-mortar book comes several weeks after the Maryland State Lottery & Gaming Control Commission awarded a sports wagering license to the Washington Commanders. While the Commanders are expected to eventually open a retail sportsbook inside FedEx Field, a team spokesman did not provide Sports Handle a timeline for whether such a facility will be completed before season’s end.

NFL policy prohibits in-stadium sportsbook facilities from remaining open on game days. When the Commanders applied for a Maryland sports betting license last month, the franchise knew of the game-day stipulation but planned to move forward with the license application regardless of the policy, ESPN reported.

The NFL is the first major U.S. professional sports league to institute such a policy.

On the one hand, the policy allows a sportsbook operator to accept live, game day wagers on the property of a stadium if the sports betting facility is detached from the stadium itself. On the other, the policy requires a team to close the brick-and-mortar sportsbook on the day of an NFL contest if the sports betting facility is physically located within the confines of the venue.

Nevertheless, in-stadium sportsbooks will serve as another customer acquisition tool for operators in the intense battle to attract new sports bettors, without spending large sums of cash on acquisition costs. As the season begins, operators are searching for creative ways to bolster account sign ups while reining in marketing expenses. Last month, MGM Resorts CEO Bill Hornbuckle noted that more than 43% of MGM Rewards sign ups in the second quarter came from BetMGM directly. 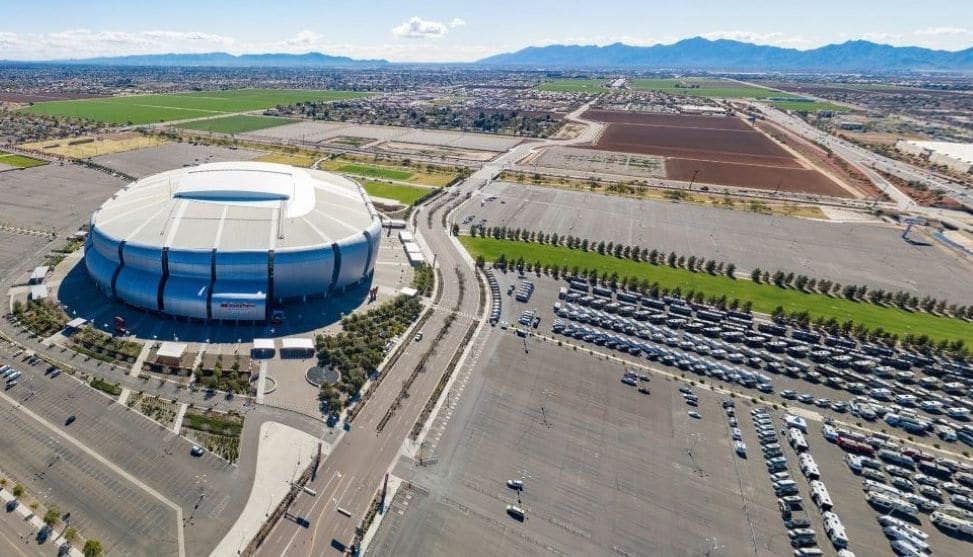 Hypothetically, let’s say the Commanders find a partner that expedites the process of constructing a retail sportsbook by Dec. 18, when the team hosts the Giants at FedEx Field.

When will the NFL require the sportsbook to shut down temporarily for the day? Will the sportsbook area need to close at 12:01 a.m. on the 18th, or will the operator be compelled to close the area at a set time several hours before kickoff? If the game kicks off at 1 p.m. ET, will the league allow the book to reopen on Sunday evening in time for the Sunday night game in prime time?

A week later, the Commanders travel to San Francisco to face the Niners on Christmas Eve. Does the policy allow the FedEx Field sportsbook to remain open on that date, since the Commanders will suit up more than 3,000 miles from their home venue? What about Monday Night Football games, the three Thanksgiving Day games, and select Saturday contests after the college football regular season concludes?

There are indications that the policy is intended to avoid in-stadium sportsbooks from being operational on days when the home team is playing in the stadium. Any details beyond the general in-stadium game day policy need to be settled between the league and applicable clubs, according to a source familiar with the policy.

On its face, the policy seems to have responsible gambling considerations in mind. If the NFL enacted the policy with safeguards for young children as its main objective, the league should be commended. An inquisitive 10-year-old who walks by a gaudy sportsbook with a bright facade could be enticed by the prospect of turning a $10 parlay into a payout of $10,000.

The NFL did not comment for this story. Efforts to reach David Highhill, the league’s new sports betting czar, were unsuccessful.

Game day policies in other sports

Around the nation presently, six retail sportsbooks operate in the immediate vicinity of a professional sports stadium — three in Arizona and three in the Washington, D.C., area.

In the nation’s capital, there’s a Caesars sportsbook at Capital One Arena, a FanDuel–branded book at Audi Field, the home of D.C. United, and a BetMGM sportsbook at Nationals Park. That book, which is connected to the ballpark, is allowed to remain open during Nationals home games under MLB policy.

It is less clear if customers are allowed to access the BetMGM facility directly through an entrance that leads into the stadium once a game has begun. The sportsbook also has a separate entrance with direct access onto the street. Another MLB ballpark, Chase Field in Arizona, contains a Caesars-branded sportsbook.

BetMGM and the Washington Nationals announced today the opening of the first retail sportsbook connected to a Major League Baseball stadium.

The NBA‘s policy does not limit direct entry from a sportsbook facility into an arena during the course of a game. Besides the Caesars book at Capital One Arena, FanDuel operates a brick-and-mortar sportsbook at the Footprint Center in Phoenix. Both are accessible from interior concourses as well as from the street.

Initially, when the sportsbook at Capital One opened, the NHL did not allow entry into the arena directly from the sportsbook during Washington Capitals contests. There were no such restrictions for home games featuring the NBA’s Washington Wizards.

A bad beat on British soil

Several years ago, while on holiday in England, I made the trek from London to Manchester for a Premier League match at the Ethiad. On the way to our seats, one of my friends, a former writer with The Daily Mail, pointed out a William Hill sportsbook in the main concourse. The match, Manchester City against Fultham, took place in 2014, four years before the U.S. Supreme Court’s PASPA decision.

I dabbled in sports wagering as a recreational bettor before, but I had never seen exotic props with such tantalizing combinations. We took the parlay cards back to the seats and made a series of mythical wagers. One in particular stood out: a Yaya Toure hat trick and a Manchester City 4-0 win: Odds 200/1. Sure, I thought, I’ll put 10 quid on Toure to score three in a 4-nil blowout.

Toure, a star midfielder from the Ivory Coast, opened the scoring with two goals on ho-hum penalty kicks. In the 65th minute, we received our money’s worth when the Ivorian midfielder curled in a gorgeous strike from 30 yards out. If Man City scored exactly once more over the final 25 minutes without allowing a goal, the improbable prop would have cashed.

On a frigid Saturday afternoon, as both teams withstood a driving hail storm, a City midfielder scored in the 84th minute. My elation lasted for only four minutes until center back Martin Demichelis tapped home a shot into the empty net for the 5-0 win.

Swarmed by his teammates, Demichelis converted on a rare opportunity. In 78 Premier League appearances with City, the defender only netted three goals. The place went mad. The unlikely prop, meanwhile, came within minutes from being graded as a win.

Truth be told, my bank account was a little thin at that point of my life. I couldn’t afford to spend anything on gambling on sports, even if it was only £10. Back in the U.S., an argument could be made that closing a sportsbook to 80,000 fans on game day will have little effect, especially in jurisdictions that offer mobile betting from a stadium seat.

But an astute parent can steer his son away from The Great Lawn and the busy queues inside the sportsbook property. A sportsbook smack dab in the middle of a concourse is tougher to avoid. As any compulsive bettor knows, a minor gambling hobby could gradually morph into full-blown addiction with just one losing prop.

Bennett Conlin contributed to this story