Breaking Down The NHL’s Partnership With FanDuel 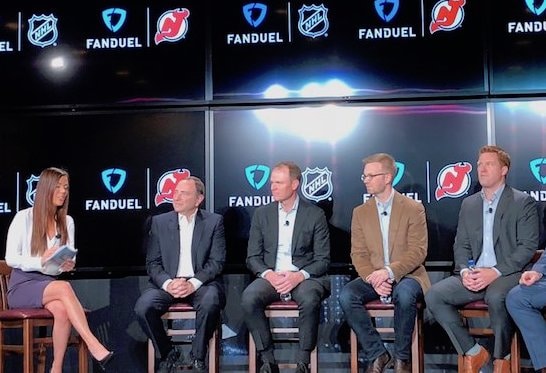 FanDuel in its newly minted partnership with the National Hockey League (NHL) has additionally refocused attention on what was its core business as it continues its efforts to establish itself in emerging Nevada-style sports betting marketplaces.

On Monday, the number two DFS company announced a multi-year partnership with the NHL, making FanDuel the “exclusive official daily fantasy partner and an official sports betting partner of the NHL.” The new deal also allows FanDuel customers to gain access to what it calls “special prizing,” such as VIP experiences to NHL major events including its All-Star Game and Winter Classic outdoor hockey game.

FanDuel also has signed a separate partnership with the New Jersey Devils, the company’s first agreement in the sports betting realm with an NHL team. In its deal with the Devils, FanDuel receives promotion during all regular season home games including an in-ice logo.

“Our approach to sports betting is to continue to be progressive as we work directly with the industry and focus on innovative opportunities for fan engagement,” said NHL Commissioner Gary Bettman in a media release. “Teaming up with FanDuel furthers our strategy of aligning with leading brands that share our vision of using new platforms and technology to drive innovation and engage and excite hockey fans.”

Bettman has led the way in recent weeks in joining forces with bookmakers, after staunchly opposing widespread U.S. sports betting for many years. The U.S. Supreme Court ruled in May that the federal law banning single-team betting except Nevada was unconstitutional, freeing up states to legalize the practice should they choose to do so.

The deal is the latest in a series of wide-ranging, but largely non-exclusive marketing agreements between the NHL as a whole, and specifically with two teams, the Vegas Golden Knights and the New Jersey Devils, with major bookmakers MGM International, William Hill US, Caesars Entertainment and now FanDuel.

While the effort on the part of the major U.S. sports leagues to receive compensation for providing the betting product in the form of a “royalty” or “integrity fee” seems to have waned somewhat, more and more marketing agreements are expected, supporting the contention on the part of the major bookmaking companies that this is the path the leagues should follow to monetize the roll-out of legal sports betting in the U.S.

Unlike the National Basketball Association and Major League Baseball, which continue to lobby in favor of a royalty or “integrity fee,” the NHL did not jump into that fray. In fact Bettman last week and NHL executive vice president and chief revenue officer Keith Wachtel, appeared to malign that approach of seeking fees through government in the name of integrity.

“We have no concerns about the integrity of our game, of our players, our officials,” said NHL executive vice president and chief revenue officer Keith Wachtel. “We’ve never had an issue. Secondly, the integrity of the sports betting landscape is just as important to the bookmakers, which is why the NHL does not have a discussion and we don’t talk about this notion of integrity fees.”

“Integrity fees is something we’ve never pursued,” Bettman said. “I’ve never worried about integrity of our game. … it’s been strong throughout a period where betting was done not through legal sportsbooks.”

MGM Now Partnered With Both NHL and NBA

In October, the NHL joined the National Basketball Association (NBA) in establishing a non-exclusive marketing agreement with MGM that includes an official league data feed. The NBA deal was announced in August.

Agreements such as the one revealed Monday also appear to indicate the two major Daily Fantasy Sports (DFS) firms, DraftKings and FanDuel, will fortify their online fantasy operations, far greater in scope than anything currently offered by other industry players such as MGM, William Hill or Caesars, while as they establish a major presence in newly established sports betting markets as they proliferate across the country.

FanDuel Group, a subsidiary of British-based Paddy Power Betfair, is more diversified than many of its competitors with numerous brands spanning gaming, sports betting, daily fantasy sports, advance-deposit wagering, and TV/media, including FanDuel, Betfair US, DRAFT, and TVG. FanDuel Group has a presence across 45 states and 8 million customers, according to the company.

The common denominator inherent in all of the recently announced deals is the emphasis on cross promotion that’s not just limited to stimulating sports betting. Free games on team media platforms and loyalty rewards that can be used for a wide-ranging variety of products and services are also available, as the sports leagues and the betting companies join forces in an effort to appeal to bettors. Many of the mobile sports betting apps also include a portal for online casino games, where legal, that can utilize the same “mobile wallet” used for sports betting.