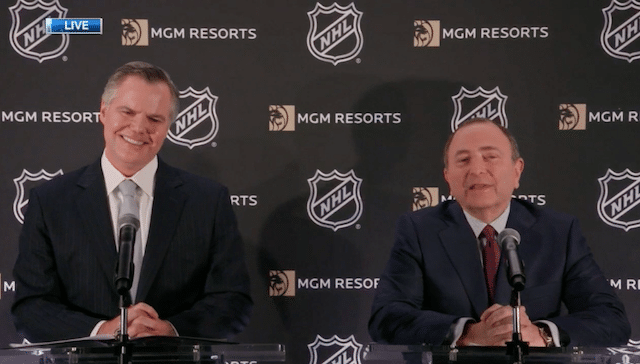 National Hockey League Commissioner Gary Bettman on Monday announced that the league struck a multi-year sponsorship agreement with MGM Resorts International (MGM), making the gaming and entertainment giant an official sports betting partner of the NHL. This follows a similar announcement by the National Basketball Association in July, where the NBA presented MGM as the NBA’s official gaming partner.

The NHL deal, aside from designating MGM as an official partner, will allow MGM use of the NHL’s trademarks and intellectual property in connection with sports wagering at its properties internationally, as well as access to “official league data” including advanced data — some of which is still getting hammered out in the lab (more on this below).

“The data we’re in the process of inventing is a process that’s been ongoing,” Bettman said. “It wasn’t our vision to develop it for sports betting, but as a broadcast enhancement to bring fans closer to the game.”

.@NHL's Bettman on today's sports betting announcement: "The world changed and we’re adapting to it.”

"The way people consume sports has changed. Whatever views anyone had a year ago was changed by the way SCOTUS ruled on PASPA. Sports betting has a new road and a new life." pic.twitter.com/ikc9ptP3C5

In other words, the NHL is ironically finding a way to monetize something it had been working on through a channel that it had vehemently opposed — sports betting.

Bettman fielded a question on that front, and acknowledged that he was instrumental in the passage of the 1992 federal ban on sports wagering outside Nevada, the Professional and Amateur Sports Protection Act (PASPA), which the United States Supreme Court ruled unconstitutional in May on Tenth Amendment grounds.

Asked what had changed, Bettman said wryly, “The Supreme Court changed.” The NHL was a co-plaintiff (and later respondent) along with the NCAA and other major pro U.S. sports leagues.

“The way people consume sports has changed,” Bettman added about the NHL’s changed tune on sports betting after its longtime opposition. “Whatever views anyone had a year ago was changed by the way SCOTUS ruled on PASPA. Sports betting has a new road and a new life. The world changed and we’re adapting to it.”

The financials and length of the deal were not disclosed. Bettman noted that given the league’s familiarity and “longstanding relationship” with MGM, it made sense for the NHL to start there. We do know that it’s a non-exclusive deal — like the NBA’s with MGM.

So while the NHL signed a multi-year agreement, the league is open for business for new partnerships with other gaming entities. MGM’s Chairman and CEO Jim Murren signaled that MGM will continue to be aggressive in the rapidly expanding U.S. market.

“MGM believes in the free market and that there will be winners and losers in the sports betting market,” he said. “We intend to be a winner.”

Bettman also noted more than once that his league is not seeking controversial “integrity fees,” which the NBA and Major League Baseball continue to doggedly pursue in state legislatures around the U.S. — an off-the-top cut of all wagers on games.

The NHL and its teams are instead focused on commercial deals like this one and engaging with gaming entities such as MGM directly.

“Integrity fees is something we’ve never pursued,” he said. “I’ve never worried about integrity of our game. … it’s been strong throughout a period where betting was done not through legal sportsbooks.”

“We monitor all of the games anyway through third party resources,” Bettman continued. “It hasn’t been an issue and we don’t anticipate it being an issue. The concerns others may have aren’t applicable to our game.”

In other forums, such as the Indiana and Illinois state legislatures, NBA and MLB officials have told lawmakers that certain types of sports betting pose grave if not existential threats to their leagues.

“We have no concerns about the integrity of our game, of our players, our officials,” said NHL executive vice president and chief revenue officer Keith Wachtel. “We’ve never had an issue. Secondly, the integrity of the sports betting landscape is just as important to the bookmakers, which is why the NHL does not have a discussion and we don’t talk about this notion of integrity fees.”

Some Background and the Future

Bettman noted that the NHL, of the four major U.S. pro leagues, was most progressive as far as actually placing a team in Las Vegas, the unofficial U.S. sports betting capitol. The Vegas Golden Knights played their first season in 2017-18.

And then the NHL had the experience of having theKnights explode in popularity as they made an unprecedented expansion team run to the 2018 Stanley Cup Finals, while the city fell in love with the team.

T-Mobile Arena, the Golden Knights’ home rink, also saw fans in the seats making wagers before and during games using their mobile devices.

“I believed there was an opportunity here since [sports betting] was happening anyway,” Bettman said. “To the extent this may provide a vehicle for more engagement and connectivity to the game, that’s something we had to embrace.”

During the press conference, MGM’s Murren noted the size of the company’s rewards program, M life Rewards. He said that they have 31 million registrants worldwide. Through this deal, the NHL will be tapping into that stream, finding potential new fans who might otherwise have not watched a game.

Through a combined database, MGM will do the same. Per the news release, MGM will “reach NHL fans through communications to subscribers from the NHL’s robust fan database that will market MGM Resorts’ portfolio of destination resort brands” and M life program.

This agreement also does not preclude individual teams from striking their own deals. Bettman said it was crafted in such a way that teams can still partner up locally — as the New Jersey Devils and Golden Knights both have done — with bookmaker William Hill US.

The Devils’ Prudential Center in Newark, N.J. is becoming home to the William Hill Sports Lounge, located outside Section 18 on the Main Concourse. During Devils games, updated league-wide odds presented by William Hill will be displayed on the Prudential Center’s 9,584-square-foot, four-story-tall scoreboard.

And as for the new source of revenue in the NHL-MGM deal, “The amount of revenue we’re going to generate is secondary to fan engagement,” Bettman said.

Meaning it’s probably not a ton. But whatever it is, the players will share in it 50/50, the commissioner said.

Put simply, Bettman said there’s no need for betting kiosks in stadiums given the availability of sports betting on mobile devices.  In-stadium kiosks or betting windows may be a bit farther than the NHL is willing to go and probably farther than it needs to go. At least for the time being.

With access on the phone, fans don’t have to leave their seats to make a wager.

Final thoughts, on the data: The fight over “official league data” has become the main sports betting battleground between the NHL’s fellow leagues, gaming entities, and state governments (and to a lesser extent, the federal government).

The NHL and NFL aren’t bothering with an “integrity fee” but would welcome having state governments mandate that legal sportsbooks purchase “official,” league-produced data, for grading of certain wagers.

But there is entrenched and growing legal precedent that statistical data is un-protectable, public-domain information, even when used for commercial purposes.

The advanced data the NHL apparently is working on to elevate engagement sounds similar to MLB Advanced Stats, which measures everything from exit velocity of batted balls to home-run distance.

As part of the relationship, MGM Resorts will receive access to previously unseen enhanced NHL proprietary game data that will be generated by the League’s state-of-the-art tracking systems currently under development. Access to this data will allow MGM Resorts to provide its customers with specialized NHL game insights, as well as unlocking new and innovative interactive fan engagement and betting opportunities for its U.S. customers wherever legally available.

So, to enhance broadcasts and bring fans closer to the game, leagues are collecting data that they are uniquely positioned to collect. Now that data may be used for betting purposes, even if that’s not how they initially imagined it.

But how much appetite is there for betting on how many meters Sidney Crosby skates in the second period? Or how many pints of sweat is pouring out of Henrik Lundqvist? Or how fast Auston Matthews’ last wrister was?

Are sportsbooks going to pay for new, invented data that only the leagues are collecting and selling? Only if the volume of betting on it validates the expenditure.

How much do bettors want to wager on invented new stats and categories? It appears that MGM will be the first to find out.