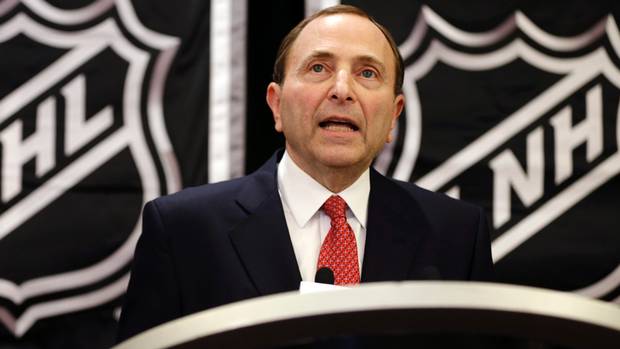 NHL commissioner Gary Bettman has never been one to mince words. And Monday night, just as Las Vegas was poised to host its first major professional championship in any sport, Bettman said it like it is.

“I’m not sure I buy the term ‘integrity fee’,” Bettman said before the puck dropped in Game 1 of the Stanley Cup Finals featuring the Vegas Golden Knights and Washington Capitals. “I don’t worry about the integrity of our players.”

Of course, that doesn’t mean that he doesn’t want a cut of the action should states across the U.S. make sports betting legal on the heels of the Supreme Court striking down the Professional and Amateur Sports Protection Act. It just means that Bettman may be trying to distance himself from what has become a not-so-popular term for what amounts to a royalty. The NBA and Major League Baseball have used the phrase “integrity fee” during efforts to lobby state lawmakers across the nation. And with its use has come criticism.

No, Bettman still thinks the NHL and other pro leagues deserve a cut. And on Monday night, he said so.

Bettman: Leagues Deserve to Be Paid for Intellectual Property Used in Sports Betting.

“I think, though, if you’re going to allocate for yourself to run a business on our intellectual property and the performance of our athletes and the platform that we put on for our games, we’re entitled to be involved in that,” he said.

The NHL, like the NFL, has been fairly quiet on the sports betting front. But the NHL became the first pro league to put a franchise in Las Vegas, the gaming capital of America, so the league has clearly put some thought into what it means to play in city that allows sports betting.

Now that states have the right to determine if they will make sports betting legal, Bettman is beginning to jump into the conversation. Besides entertaining the integrity-fee question, he also weighed on other sports wagering related issues.

With regard to whether his league would prefer the framework for sports betting he said: “We’re looking for consistency. Whether that can be done federally, which would make it easier to make sure the rules of the game, the types of bets that are being placed, how things are being conducted, we’d like consistency, and we’d like not to have it vary state by state. Now, if all the states want to come together and do the same thing, that would be the equivalent of federal legislation, and that’s something that we’re focused on.”

The NFL has called for federal guidelines while the NBA is currently advocating for state guidelines.

NHL Still Mulling How to Deal With Data in Regards to Sports Wagering.

In addition, the NHL has plenty of data at stake when it comes to its games. In addition to tracking player data, the NHL has puck-tracking data, both of which could be used in sports wagering. Bettman was quick to point out that when the league began exploring ways to develop data “it was not in anticipation of betting on our game.” But like all of the other leagues, the NHL won’t be in the business of offering up free data.

“If, in fact, that does provide data that might provide for interesting betting, if all the circumstances are right, we’d have to look at it, but we’re not going to give it away,” he said.